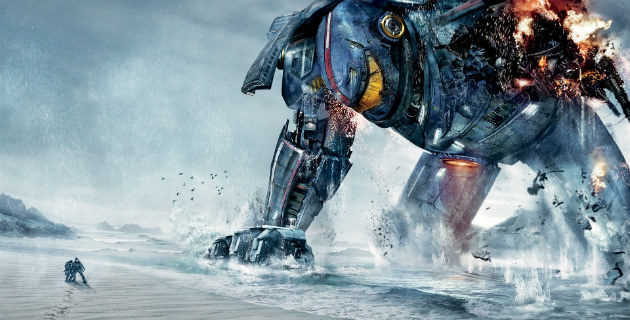 Guillermo Del Toro's upcoming sci-fi action pic is probably going to be as awesome as the trailers make it look, unless you're the kind of person who hates the sight of huge mecha fighting against equally huge monsters, in which case please show yourself out. How could you not love enormous robots punching out enormous monsters who lay waste to entire cities? Giant robots represents 90 percent of what we want the future to be like (the other 10 percent: flying cars, and a male birth control pill.) They're extremely cool looking, they transform, and for sheer shock factor they're impossible to beat.

We want them so badly, but could we have them in real life? Unfortunately, hell no. Not because of budgetary constraints, frustratingly missing confirmation of alien life, or the lack of a decent fuel source. There's a bigger problem facing these robots than any alien invasion: Physics.

Yes, the terrible dictator that ruins everything from warp drive to immortality also has a bone to pick with Del Toro's supersized combatants. And unfortunately, as inherently awesome as it sounds, having giant robots brawling with giant monsters in regular ol' planet earth gravity runs right up against the twin problems of weight distribution and the nefarious square cube law.

The square cube law is a paradoxical-sounding mathematical concept, first identified by Galileo, which states that when a given object increases proportionally in size the new surface area is proportional to the square of the multiplier, but the new volume is proportional to the multiplier's cube. Or restated for those of us whose eyes begin to bleed when the subject of math comes up: When something increases in size, its volume increases faster than its area. If you double the size of an object for instance, surface area increases by four times, but the volume of that object, which is (duh) all the space inside it, increases eightfold.

This law has implications for numerous scientific disciplines, including construction and biology. To get an idea of how it works, let's say you take an average human woman, someone approximately 5 feet, 5 inches tall. Increase her size to 11 feet. You now have a woman whose heart is four times bigger, forced to pump a presumably proportional increase in blood through 8 times the amount of circulatory system her smaller incarnation had. That's a tremendous amount of stress and likely to kill anyone who grows beyond a certain height*.

Of course, animals which have evolved to be big, rather than having had a gene preventing abnormal growth turned off, have developed the respiratory and circulatory systems necessary to handle their needs. But before you break out the snacks for your 'Yay, monsters for everyone!' party, bear in mind that all that volume comes with a ton of additional weight. Mice, for example, don't look like miniature elephants for the very excellent reason that an elephant's bones have to be much bigger in proportion to its body size than a mouse's skeleton does, in order to support all that weight. In fact, if you zapped a mouse with magic to increase it to the size of an elephant, its bones would probably be crushed under the weight of its soft tissue within seconds. EEK! And even though the elephant's bones can support it, it still has to deal with the fact that it's far easier to break something heavy than something light, which is why a mouse could jump off a waist-high kitchen table with no ill-effect, but an elephant can break a leg simply tripping over something.

Complicating things further, all that weight needs musculature capable of dealing with it, and that's another way the square cube law totally screws over giant animals. It takes considerably more muscles to manipulate the animal's limbs and moving parts, but those muscles have to deal with a hell of a lot more weight. This means larger animals tend to be slower and less agile than smaller animals and beyond a certain point there's no amount of naturally evolved biomechanical components that can do the job. In fact, this is why earth's largest animals are water-dwelling, where buoyancy mitigates a lot of the stressors caused by huge mass and weight. Forget deftly sweeping cars off a bridge with the swipe of a taloned hand; a giant monster like the beasts in Pacific Rim might find it difficult to even stand up.

* Read Orson Scott Card's Shadow series for an excellent depiction of the problem. But ignore his reactionary politics which become insufferable as the series goes on.

NEXT: The square cube law and giant freaking robots