'The Worst Movie EVER!' Filmmaker Makes More Than $11 With His Latest Effort 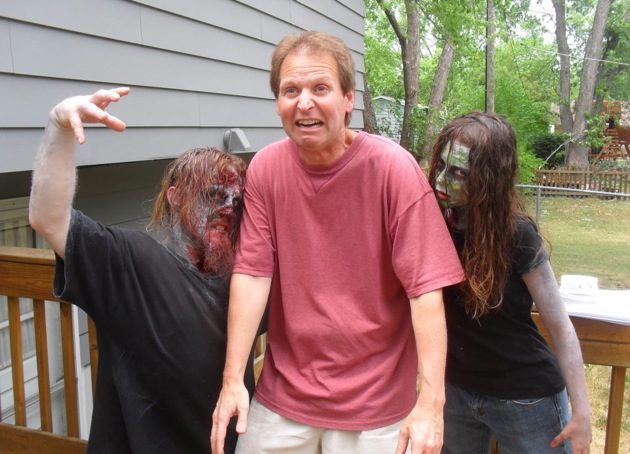 Actor-director Glenn Berggoetz is bringing his new film to Los Angeles on March 23, and this time, he says, he's going to make more than $11.  As Movieline gleefully reported in 2011, Berggoetz's  microbudget picture The Worst Movie EVER! earned the dubious distinction of selling a single $11 ticket during its opening weekend at a single theater in Los Angeles. But his follow-up, Midget Zombie Takeover, has already improved upon that.

Berggoetz (he's front and center in the above photo) premiered Midget Zombie Takeover at the Alamo Drafthouse Cinema in Winchester, VA on Feb. 8, and, according to Box Office Mojo, the picture earned $2,755 — more than its $2000 budget and a 25,000-percent improvement over his last film's opening. (The movie's trailer is posted below.)

In an email, the Denver-based filmmaker writes that the capacity crowd at the Drafthouse "went nuts" and that theater owner "Steve Nerangis told me he's never heard so much laughing at a film in all his years of owning the theater." Berggoetz adds that this initial reception and "nothing but great reviews since its release" have translated to cinemas booking Midget Zombie Takeover "not just as a midnight movie, but for multiple screenings" in some cases.  He also notes that a theater in Phoenix is considering booking the film for entire week — the first time that his work has received such a lengthy showing.

The moral of the story?  Being known as the guy with the worst movie opening ever has turned out to be a pretty good thing for Berggoetz. "While I wouldn't call the $11 opening weekend debacle a badge of honor, it soon became, and remains, a god-send," he writes. "I still get inquiries from fans all over the world asking about the film, and it really led to me making some great connections."

Although Box Office Mojo reports The Worst Movie EVER! has earned only $10,194 since November 2012,  Berggoetz says he got a book deal and speaking gigs out of the ensuing publicity. Last October, he published: The Independent Filmmaker's Guide: Make Your Feature Film for $2,000 .   As he puts it, "Had The Worst Movie EVER! done $110 its opening weekend, a lot of these doors (maybe all of them) wouldn't have opened for me. So while that opening weekend was a complete bummer at first, I wouldn't trade it for anything (other than a $20 million opening weekend)."

And as he prepares to return to the city where he was humiliated in 2011, Berggoetz is confident that, this time around, he'll be vindicated. "At this point there are more than 50 people who have contacted me online to say they'll be attending the midnight screening on Saturday, March 23 at the Laemmle NoHo 7 in North Hollywood," writes the filmmaker, who has clearly learned something about promotion and marketing since then. "So it looks like we'll post our best L.A. box office numbers yet!"