The $11 Question: How The Worst Movie EVER! Scored the Worst Opening Ever 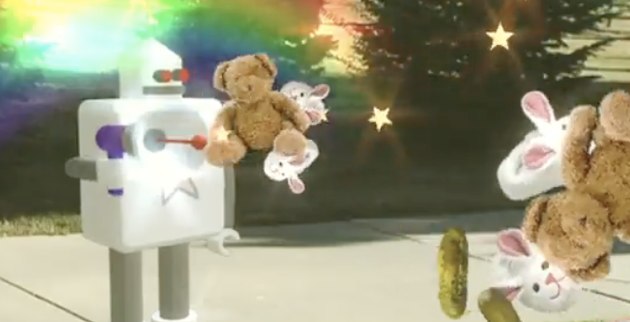 The little movie that couldn't has become the little movie that still probably won't but will at least have fun trying: Since Tuesday, when we brought you the story of The Worst Movie EVER! and its unprecedented $11 opening weekend, a groundswell of lookie-loos from around the world have made the trailer a mini-hit on YouTube and initiated something of a cult following on Facebook. It still has a ways to go before reaching The Room levels of notoriety, but for now, anyway, it can still claim one critical distinction: Nobody has any idea who its one ticket-buying viewer is.

Movieline finally heard from filmmaker-actor Glenn Berggoetz a few days ago as WME! and its box-office futility began stirring interest around the Web. In a nutshell, he insisted not only that the $11 midnight gross from last Saturday (and the $0 gross from Friday) was not a publicity stunt, but also that his efforts to turn up the identity of his lone theatrical patron has yielded no success to date. The Denver-based schlock impresario added that the last 48 hours have turned up a few Facebook sources claiming to have attended the screening at the Laemmle Sunset 5 in Los Angeles, but he hasn't been able to confirm any of them as Viewer Zero.

Nor has Greg Laemmle's team at the Sunset 5.

"We're anxious to find out as well," Laemmle told me today. "We need proof. Glenn said he's already had a few people claim that they were the ones. I think we need a ticket stub here. We're going to poll the staff to see if it's maybe someone they recognize, someone who comes to see everything we play. Who knows?"

Even more baffling perhaps: How did this even happen?

"There were a number of factors -- and I'm not going to comment on the aesthetic qualities of the film," Laemmle said, laughing. "There was some miscommunication, there were some delays in confirming stuff. I was rushing off to a vacation and sort of said, 'Oh, by the way, we can go ahead if you want to.' Glenn, I guess, was anxious to do it and said yes. But clearly, because we hadn't necessarily confirmed the date in an appropriate fashion, he hadn't done the work promoting the screening that he thought he could have should have done. These things happen.

"Is it one of the worst showings we've ever had? Yeah, probably."

According to both Berggoetz and Laemmle, they had begun speaking as early as this past May about programming WME! this summer. The idea was to prime its debut by screening the now infamous trailer in front of the Sunset 5's monthly midnight screenings of The Room. But Berggeotz said that on Aug. 14, he got word that Laemmle was ready to go ahead with an Aug. 19-20 engagement. The theater's idea, he explained, was to test WME!'s potential as another midnight institution, with an eye on giving the last two weekends of each month to Berggoetz's film and The Room, respectively.

"I had few apprehensions," Laemmle said, "if only because we were screening a few other midnight screenings that weekend, and I figured, 'What's really the loss to Laemmle in putting one more film into the theater that weekend?' That's why we targeted that date from the very beginning. We knew that we would be open for midnights anyway, so let's give it a shot."

Laemmle consulted with Berggoetz, who approved and commenced a hasty marketing effort for the coming weekend screenings.

"I figured I would promote the film as I had done with my previous film that received a theatrical release, To Die is Hard," Berggoetz told me in an e-mail. "Do a bunch of social networking through e-mail and Facebook, and contact local media people and schedule interviews and reviews. I was busy all day last Monday the 15th traveling, so on Tuesday the 16th I began contacting media outlets in the L.A. area and sending out e-mails and postings."

That's when things started to look bad. Like, very bad.

"As the week wore on," Berggoetz continued, "I noticed two things -- all of my contacts in L.A. were either busy for the weekend or out of town (I'm based in Denver, but a number of my previous cast members from other projects live in the L.A. area), and not one of the many media people in L.A. were getting back to me. I began to worry. I really began to worry when I heard nothing all day Saturday about the Friday night screening, then nothing all day Sunday about the Saturday screening. I knew that wasn't a good sign."

Later that Sunday, Aug. 21st, Berggoetz inquired with folks at the Sunset 5 about WME!'s performance. By Monday morning, he'd received word that nobody attended the Friday night screening, and one person paid $11 to view the Saturday screening.

"I had a number of reactions at first," Berggoetz explained. "I was flabbergasted at the number and wondered if it was possible that it was correct. Then I quickly felt awful that I had let Greg Laemmle and the Sunset 5 down for not getting people out to the theater and for not putting some money in the theater's pockets. Then after the initial shock wore off a short while later, I thought, 'Wouldn't it be ironic if The Worst Movie EVER! did the all-time worst opening weekend box office ever?' While I was certainly hoping for hundreds of people to turn out for the film, the irony is a bit too delicious. Also, I would be thrilled to know who it was who attended the screening so I can put him or her in my will."

That's when it all sounded a little too convenient. While keeping in mind that an empty theater at midnight is no art-house venue's ideal scenario, I asked if that worst opening ever was Berggoetz's plan all along.

"It was not a stunt," he replied. "It just worked out this way. Thank goodness." Laemmle confirmed that the theaters were not rented privately, and that any moviegoer off the street was welcome to buy a ticket to either weekend screening.

So! Thank goodness is right. WME!'s gonzo trailer has acquired more than 62,000 views since Tuesday -- hardly a viral blockbuster, but quite a timely boost for a movie that has another screening currently set for next Wednesday, Aug. 31, at the Alamo Drafthouse in Winchester, Va., and other dates reportedly on the way in D.C., Texas and Indiana.

A foreign expansion may also be forthcoming. A smattering of new fans from Europe in particular have descended on WME!'s Facebook page, and Berggoetz said he has received Asian interest as well. But in the immediate term, the filmmaker said he is committed to resolving any hard feelings in L.A. and getting his film back at the Sunset 5 after proving its mettle elsewhere.

For his part, Laemmle is agreeable to that.

"It does enhance notoriety," the theater owner said. "We'll see down the road if that translates into trying to bring it back and get a few more people in the theaters. [...] The Room is a perfect example. The grosses weren't quite this low, but then it was playing for full-week engagements. There were plenty of screenings of The Room when it first came out where there were only one or two people in the auditorium. It was kind of similar. And yet from that, it grew into something."

PREVIOUSLY: Something Called The Worst Movie EVER! Made $11 Last Weekend