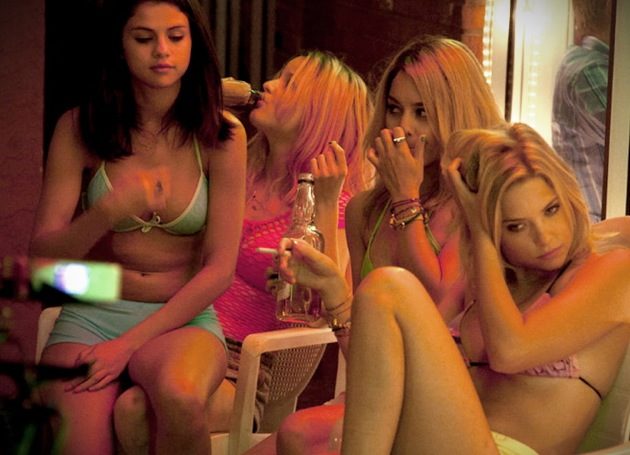 “Oops! … I Did It Again” isn’t one of two Britney Spears hits performed onscreen in Spring Breakers, but that song’s self-aware spirit of coy misbehavior is stamped all over Harmony Korine’s most mainstream provocation to date. Following four college girls’ descent from Florida spring-break debauchery to the even more vertiginous lows of thug life, this attractively fizzy pic may be a shock to the system for fans of teen queens Selena Gomez and Vanessa Hudgens, but remains pretty toothless titillation by its writer-helmer’s standards. Unfamiliar multiplex exposure awaits the aging enfant terrible, though the youthful target audience may seek it out on newer media.

Arriving three years after Trash Humpers, Spring Breakers couldn’t come as a more candy-colored contrast: The clearance costs alone for its soundtrack, jammed as it is with current Top 40 artists like Nicki Minaj, Ellie Goulding and the Black Keys, must dwarf his last film’s entire shooting budget.

If the film is a sellout, however, it’s a calculatedly ironic one. From its dayglo opening montage depicting the sights and sounds of a typical spring break — a relatively modern rite of passage that finds college students congregating in coastal towns for reckless drinking and indiscriminate sex — Korine is plainly aping the aesthetic of such vapid MTV exploitation shows as Jersey Shore.  Less clear is whether he’s effectively satirizing them or merely complicit in the glossy meretriciousness of the culture they represent.

It’s a line this frequently amusing film never negotiates with complete success, though Korine might believe this ambiguity is itself indicative of the generation under scrutiny. Just about every charge of social negligence leveled at Spring Breakers can be countered with an arch claim of intent, which makes it at once playful and wearying; enjoyment is contingent on how little you’re willing to fight it. Indeed, there’s plenty to enjoy once the white flag has been raised, from the glistening neon polish of Benoit Debie’s ace lensing to James Franco’s latest gonzo turn, this time as a gold-toothed, bird-brained white gangsta who has modeled his entire image on Lil’ Wayne.

Franco dominates the proceedings after entering them about a half-hour in, not least because the four putative heroines remain blurred at the edges throughout. Raven-haired Gomez is afforded the most distinct perspective (and coiffure) as the none-too-subtly named Faith, a churchgoing good girl who likes to let her hair down at spring break with her three interchangeably fair-headed friends Candy (Hudgens), Brit (Ashley Benson) and Cotty (Rachel Korine, the director’s wife).

None of them has enough cash for the trip to the Sunshine State, prompting Candy, Brit and Cotty to stage an armed robbery at a Chicken Shack, fixing the girls’ moral dynamic and setting the tone for what’s to come. Once in Florida, the quartet’s shenanigans land them in prison for drug abuse, until they are bailed out by Franco’s mysterious benefactor, Alien (“Truth be told, I ain’t from this planet”).

Repelled by Alien’s sleazy criminality, Faith jumps aboard the next bus home. The other three girls, in the film’s increasingly dreamy logic, are somehow turned on by his “BALLR” license plate and bewildering collection of firearms, and duly join his posse. This alliance may afford the film’s most delicious scene, in which Alien and the gun-toting trio gather for a piano-led singalong to mawkish Spears ballad “Everytime,” but it’s a disappointingly patriarchal turn of events for a film that initially promises a reckless girl-power spree along the lines of Set It Off or, more extremely, Baise-moi.

This is one of several areas in which Breakers, the most eccentric stretches of which recall the recent lo-fi work of Zach Clark (Vacation!), could have been more bravely subversive than it is. Though the film is heavy on breasts and bullets, its violence and sexual content are unlikely to threaten R-rated boundaries, while an early girl-on-girl kiss is tamer than any sung about by Katy Perry. Casting the wholesome Gomez as Faith, with tabloid-sullied High School Musical alum Hudgens as the more rebellious Candy, is a reasonably clever wink, though the stunt hasn’t much of a shelf life, and both actresses deserve more to play with.

By contrast, virtuoso French d.p. Debie (Enter the Void) is given the run of the toy store, lighting the film in exquisitely lurid pools of clashing color that lend even a university lecture hall the ambience of a nightclub at witching hour. The juddering electro score, a collaboration between Cliff Martinez (Drive) and chart-topping dubstep wizard Skrillex, couldn’t be more on the money. The most striking soundtrack cut, however, is Nicki Minaj’s hip-hop anthem “Moment 4 Lyfe,” heard through a car radio over Debie’s bravura tracking shot of an armed robbery in progress. The film could use more such eerie tonal discord.