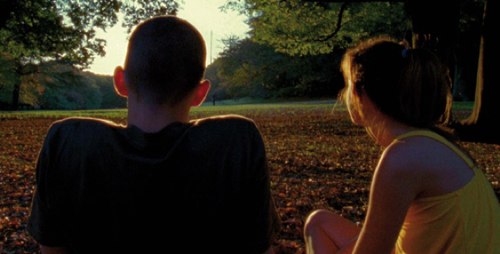 It's not every day that a director makes a movie that's both amazing and pointless, the kind of gimmicky shockeroo provocation that wows you even as it leaves you going, "Huh?" Gaspar Noé fills that niche, for better or worse, with his hallucinatory life-after-death tone poem Enter the Void, a picture that's by turns inventive, tender and boring, and one that uses a variety of novelty point-of-view techniques: If Penisvision isn't your thing, then Vagin-o-rama just might float your boat.

Made by the devil-horned provocateur behind I Stand Alone and Irreversible, Enter the Void should be more memorable than it is -- it's a picture whose wildest images don't linger in the mind as vividly as they ought to -- but at least it often feels alive while you're watching it. The story is told (and seen) from the eyes of the protagonist, a junkie and sometime dealer named Oscar (Nathaniel Brown), who's alive when the picture opens but not when it ends. We see his face only occasionally, when he gazes into a mirror, or as he looks down on his own lifeless body -- but I'm getting ahead of myself. As the movie opens, Oscar is living in Tokyo with his sister, Linda (Paz de la Huerta); she stands on the balcony of their flat, gazing out over this magnificent, toylike neon city, before heading off to work, leaving Oscar alone first to get high and then to set off on a routine errand that leads to tragedy.

Oscar and Linda are extremely close: Their parents were killed in a horrific car crash when they were children -- they witnessed the brutal end of their own childhood from the backseat. After that, they made a blood pact to stick together forever. Oscar takes that promise quite literally: He's killed suddenly in the early minutes of the movie, and his spirit -- in the form of Noé's floaty camera -- begins hovering shakily over the mortal world, at first uncertain where to go or what to do. He finds himself living the woolly afterlife nightlife described in the Tibetan Book of the Dead, a book his friend, the pleasingly scruffy Alex (Cyril Roy), has recently loaned him.

Just before Oscar's death, Alex had admonished him to do a better job of looking after Linda. (It turns out that Alex has a crush on her, and often cajoles Oscar into accompanying him to the strip club where she dances.) And in his new form as a traveling spirit, Oscar takes the urgency of that mission to heart: Spirit Oscar begins drifting through the city, which we now see via ghostly overhead tracking shots, as he makes his way to his sister, who happens to be having sex with her skeezy boss just as he arrives on the scene.