Oscar Index: Anne Hathaway Is A Sure Bet For Sunday, But Jennifer Lawrence Shouldn't Get Cocky 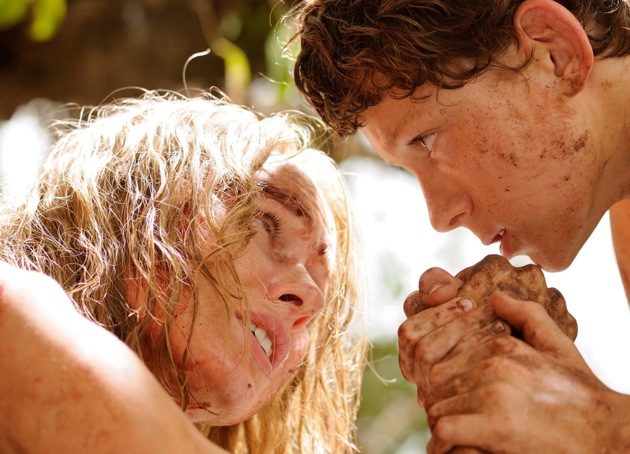 The Oscar season enters its last weekend, but one suspects it is far from over. Even if Academy members ultimately hewed to tradition and voted Lincoln and Steven Spielberg Best Picture and Director, respectively — as is the customary coronation for films with the most Oscar nominations — this outlier season will be studied and debated. For at least days to come.

The Final Countdown To The 2013 Academy Awards
The final week of voting saw pundits and bloggers get in their final shots, filibuster like Jefferson Smith for their lost causes (“the only causes worth fighting for”), issue their final predictions or revise earlier forecasts. Roger Ebert backtracked slightly from his self-described “cocky” “Outguess Ebert” boast that he had guessed every (contest category) correctly.

“Every year it is the same,” Ebert wrote. “I came out of the gate filled with certainty, and as the deadline draws near I begin to falter."

Several enterprising writers persuaded some Academy members from various branches to share—anonymously—their Oscar ballots, and the results might give pause to anyone convinced that any of the major categories (except perhaps Best Actor and Best Supporting Actress) are locks.

The Oscar Index views and duly notes these ruminations objectively. The reported (conjectured?) groundswells make for compelling Oscars storylines, last-minute cliffhanging drama and even, perhaps, better ratings for the telecast. The Index admits to a conservative risk tolerance here, but on Monday morning will probably say it knew De Niro would win Best Supporting Actor all along.

Let’s look at how the Gold Linings playbook plays out on Oscars eve. 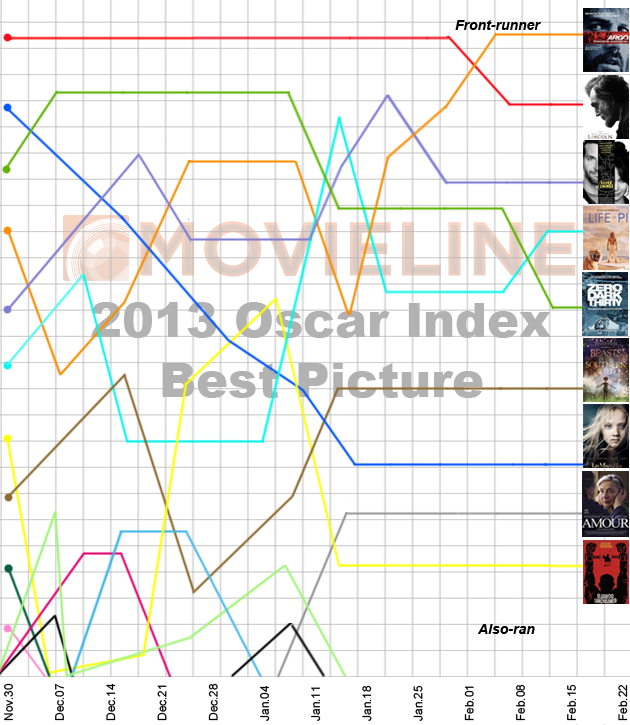 In Oscar season, as in war, the first casualty is truth.

Three of the Best Picture nominees, frontrunners at various stages of Oscar season, took Battleship-like hits for remaking history. Critics of Zero Dark Thirty, said it was pro-torture — oh, for the days of the Orwellian Bush era and “enhanced interrogation techniques” — and heightened its role in the killing of Osama Bin Laden. Lincoln slandered the state of Connecticut by depicting its representatives as voting against the 13th Amendment. And to read The New York Times’ Maureen Dowd and Salon’s Andrew O’Hehir this week, about the only things Argo got absolutely right was that there is a country named Iran and a CIA operative named Tony Mendez.

I’m bracing myself for the eleventh-hour revelation that Quvenzhane Wallis is actually a 32-year-old psychopathic Russian dwarf pretending to be a child.

But just as those Iranian guards discovered as they chased the hostage-carrying plane down the runway (yes, I know; didn’t happen) there should be no stopping Argo’s awards season take-off, lifted by wins from such major Oscar precursors as the PGA, DGA, SAG, BAFTA and, most recently, WGA (you know; the guild supposedly more terrifying than the Ayatollah).

For awards bloggers, this Best Picture race has been all kinds of personal. Lincoln champion Sasha Stone at Awards Daily concedes the race to Argo, but will have none of it, diss-missing director Ben Affleck as “a movie star director…(who) finally made a movie people liked” and bemoaning the injustice suffered by “a film that good, that well intentioned.” Hollywood Elsewhere’s Jeffrey Wells, too, picks Argo to win, but not before raging against the machine for the film he believes should win: “Zero Dark Thirty, Zero Dark Thirty, Zero Dark Thirty, and I don’t care…going down with the ship.”

The more journalistic pundits at Gold Derby and Gurus o’ Gold mostly favor Argo to win, but Anne Thompson sees echoes of last year’s race between The King's Speech and The Social Network:

“On the one hand, there's recognition of what the older Academy goes for: quality, heart, period seriousness. On the other is a more youthful, ardent and in its way, au courant popular favorite. This year, both contenders are resonant and timely, but one seems more establishment while the other is the hip up-and-comer.”

And the Academy, she notes, is more establishment than the guild members who honored Argo.

As for the Academy members who shared their ballots with the media, they're all over the map. Of the five ballots shared with Entertainment Weekly, Argo was the pick of the Executive and the Actor. The Director went with Silver Linings Playbook, the Actress, Life of Pi, and the Writer, Beasts of the Southern Wild. A Director sharing his ballot with The Hollywood Reporter went with Zero Dark Thirty.

Apropos of nothing, the Oscar Index remembers vividly being in thrall to Argo. When it was over, I leaned over to Mrs. Index and said, perhaps facetiously, “Best Picture.”  Like Lincoln, it celebrated America at its best. But it also celebrated Hollywood at its best. It was not a valentine to the movies like The Artist; it was more of a “We love this country, too,” pat on the back.

But with all the potshots that Lincoln has taken over the last few months, it should be noted that the film truly did make history. After seeing the film, inquisitive Mississippi moviegoer Dr. Ranjan Batra discovered upon further research that the state had yet to technically ratify the 13th Amendment. He got the ball rolling and on Feb. 7, the state’s ratification became official. So Lincoln’s got that going for it. 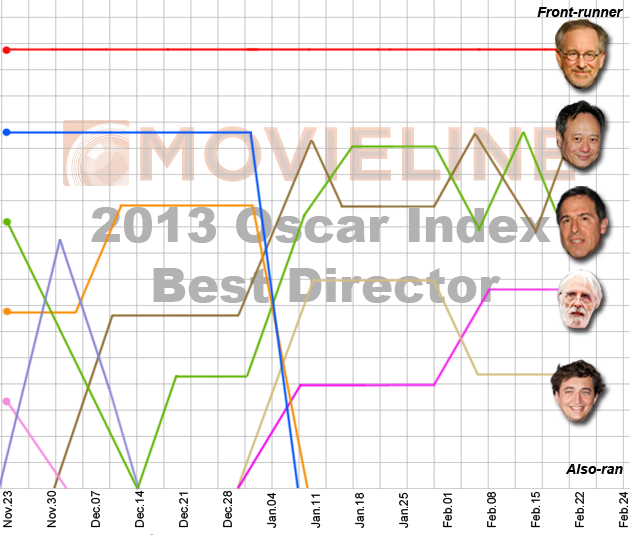 Here’s one of the categories in which we are fending off a little Index remorse. Steven Spielberg edges out Ang Lee, according to pundits Gold Derby and Gurus o’ Gold.

With Affleck out of the running, this might be the category in which Academy voters choose to acknowledge Spielberg’s achievement. But The Wrap’s Steve Pond posits:

“…as much as voters admire and respect (Lincoln), they don't seem to love it, and as a result I think he is going to lose. The huge Actors Branch could sway things in favor of David O. Russell, whose film has been coming on strong in a typical Harvey Weinstein-engineered surge. But I suspect that the rest of the Academy will lean toward the spectacle of Life of Pi, and give Ang Lee his second Best Director award without a corresponding Best Picture win.”

What do those shared Oscar ballots in EW reveal? The Director went with Russell (“the heart of the job remains performances”), but the Actress, Writer and the Executive went with Lee. The Actor voted for Spielberg. 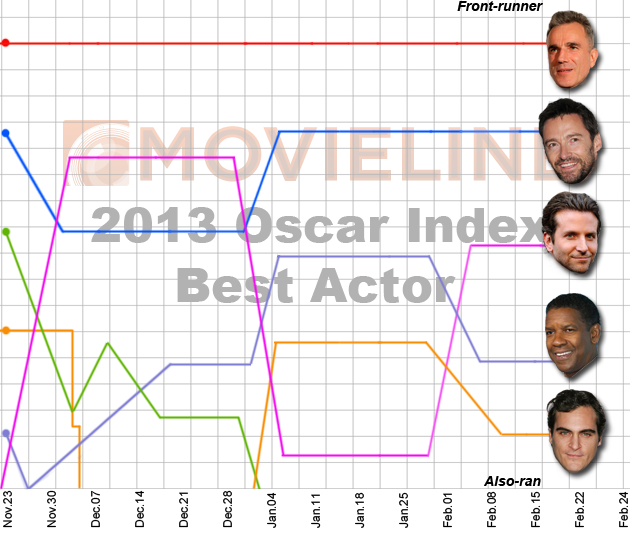 Raymond Massey couldn’t do it. Henry Fonda couldn’t do it. Rex Hamilton couldn’t do it (that’s for any Police Squad watchers out there). Daniel Day-Lewis will be the first actor to win the Academy Award for portraying Abraham Lincoln. Oh, and he’s poised to become the first three-time Best Actor Oscar-winner. On this, Oscar-watchers are near unanimous. He was also the pick of four of the five members who shared their ballots with EW. The Actress went with Bradley Cooper. If she's available and she ever runs into Cooper, it will make a nice icebreaker. 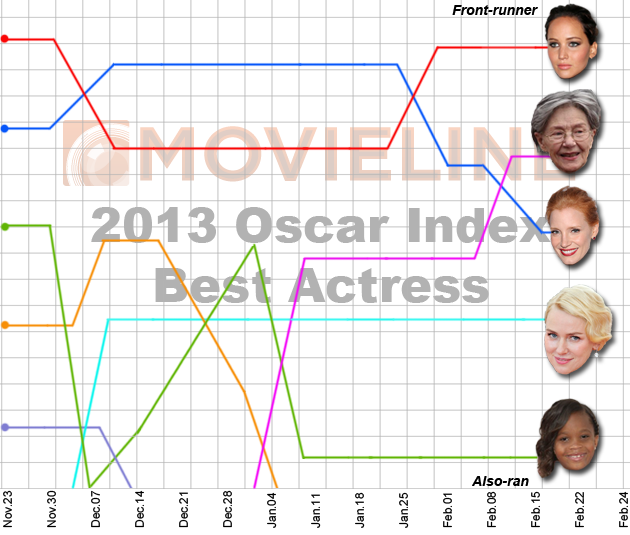 This is another category that seems to be in last-minute flux. Jennifer Lawrence has retained her frontrunner status among pundits, but several are noting the intangibles attached to 85 year-old Emmanuelle Riva, not the least of which is the “too soon” factor. In other words, Lawrence and Chastain will be back and this is Riva's first, and presumably last, bid for an Academy Award. Then again, three of those five EW ballots went with Naomi Watts in The Impossible. Could enough votes divided among the top three contenders make that possible? 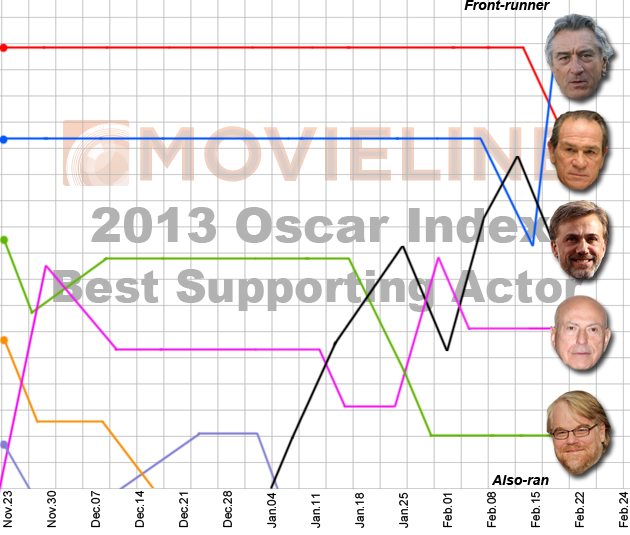 Former frontrunner Tommy Lee Jones has endeared himself to no one this Oscar season and stayed off the campaign trail. On the one hand, you’ve got to grudgingly respect that. On the other, he might get the Golden Globe glums again watching Robert De Niro pick up his first Academy Award since Raging Bull.  De Niro can be as taciturn and intimidating as Jones, but he gamely put himself out there this season and revealed an emotional side that swings votes. Now that is acting, dear readers. Twelve vs. nine of Gold Derby’s experts are now on Team De Niro. The Gurus o’ Goldsters also now rank De Niro as the frontrunner, dropping Jones to No. 2.  Two out of three of In Contention’s experts are also in De Niro’s camp. If De Niro does win, he owes it to Katie Couric to acknowledge her in his acceptance speech.

But there is one Silver lining — for TLJ: Nate Silver, the breakout prognosticator in the last presidential campaign, predicts Jones (and Spielberg) will win.

There has, too, been some late-breaking buzz for Christoph Waltz. That Director who shared his Oscar ballot with the Hollywood Reporter admitted that he did not vote for Jennifer Lawrence because he was offended by her Saturday Night Live monologue (on principle alone, can his privileges be revoked?). I wonder what he thought of Waltz on “SNL” as “Djesus Uncrossed”? 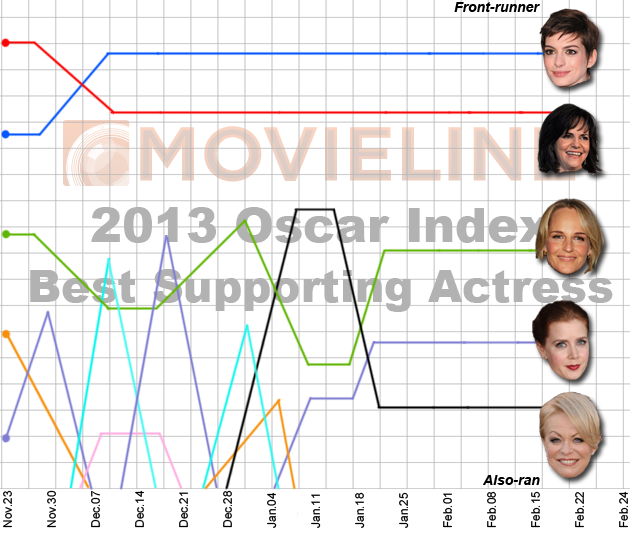 This Oscar has a first name; and it’s Anne.