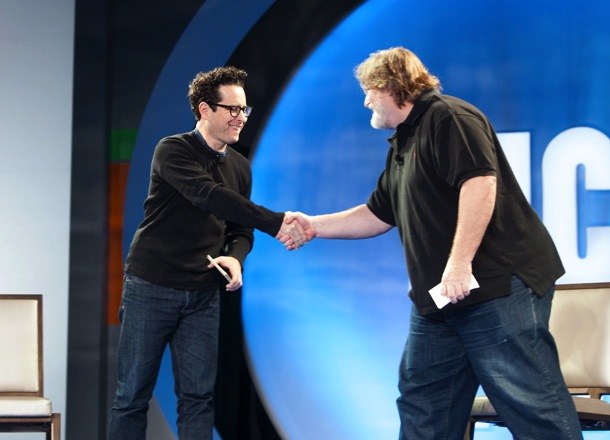 If you're a gamer or a J.J. Abrams fan, then you already know that, in addition to the rebooting the Star Wars franchise, his Bad Robot  production studio has teamed up with video game developer Valve to explore movies and games, including adaptations of the latter company's popular Half-Life and Portal titles. The two men revealed they are teaming up at the end of their keynote presentation at the Design, Innovate, Communicate, Entertain (D.I.C.E.) summit in Las Vegas on Feb. 6. Their conversation is presented in its entirety after the jump and it's worth watching, not so much because of the announcement, which is vague, but because the discussion is a fascinating master class on the differences between storytelling in movies and video games.

If I'm grading this faux debate, I say Abrams emerges the victor. Not only does he make his points well, the Half-Life clips he uses to illustrate his point also demonstrate how mind-numbingly pedestrian dialogue in video games tends to be.

Newell gets in a good line Abrams' filmmaking aspirations. After the newly minted Star Wars Episode VII director shows how R2-D2 was digitally  inserted into a debris scene in the first Star Trek movie, the Valve chief says, "So now I have to go back through all of your movies looking at debris to figure out which movies you’re going to direct next? “