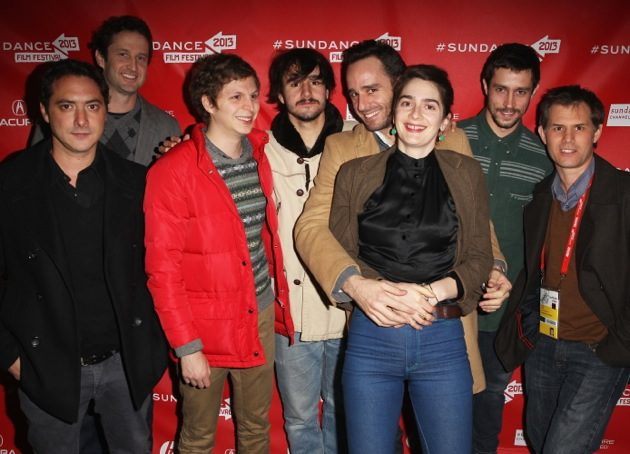 Who you gonna call to cast Ghostbusters 3 — if it ever gets made, that is?  Don't count on Michael Cera. I got a brief moment to talk to the actor at the Sundance Film Festival on Thursday where his latest movie, Sebastián Silva's Crystal Fairy  helped kick off the festival, and I took the opportunity to ask him if he'd been approached at all about the much-discussed Ghostbusters 3 film that co-creators Dan Aykroyd and Harold Ramis want to start shooting this year .

"I haven't been approached," said Cera, who expressed some doubt that the picture was happening. When I then asked if he would be interested in appearing in Ghostbusters 3 if the stars — and a good script — aligned, he replied: "That would be a tough one. The first movie meant so much to me. It could be dangerous." Smart kid. Cera loves the original Ghostbusters so much that he doesn't want to appear in anything that's not going to honor it.

And yet, I was surprised by the answer. Aykroyd and Ramis have both said that the plot of Ghostbusters 3 will involve the original crew handing off their Proton packs to a new generation, and Cera's well-known GB love and his deadpan style make him an ideal candidate. In a poll Movieline conducted last fall, Cera was readers number-two choice, behind Seth Rogen, to be part of the new Ghostbusters team.

I didn't get much of a chance to talk to the actor because he was swarmed by Sundancers congratulating him for his performance in the completely improvised Crystal Fairy. Cera plays an obnoxiously self-absorbed American who undergoes an emotional transformation when he invites a free-spirited but damaged woman who calls herself Crystal Fairy (Gaby Hoffmann)  to accompany him and his Chilean friends on a road trip to do Mescaline.

Both Cera and Hoffmann (You Can Count on Me) give intense, layered and remarkably ego-free performances in this dark comedy that comes with a real emotional punch at the end. (Silva has two movies with Cera in them at the festival. The other is Magic Magic with Juno Temple.)   Hoffmann's being doing exceptional work for years, but her portrayal of the New Agey Crystal Fairy should put her in line for some real marquee roles based on effusive audience reaction Thursday night.  Twice during the film, she gets completely and unabashedly naked, which inspired one woman in the audience to yell out "Free style!" in reference to the actress's unruly, character-appropriate pubic hair.

After the screening, Silva said that his scriptless movie, which was shot in 12 days, is about "the birth of compassion in someone's life" and is based on an actual encounter he years ago with a woman who actually called herself Crystal Fairy.  "I hope she finds out," said Silva, who'd like to get back in touch with his muse.