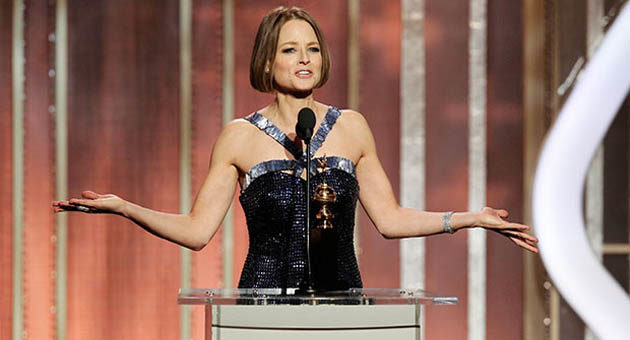 Years ago, feminists rightly noted that the personal is political. That has never been more true than when it comes to the personal lives of gay people in America.

Accepting the Cecil B. DeMille award at last night's Golden Globes, Jodie Foster delivered a heartfelt and sincere comment on her long career in film. Equal parts sincere appreciation and fraternity levels of booze-intake, (so I assume, given how many bottles of champagne there appeared to be on the tables at the Beverly Hilton), it probably wasn't half as eloquent as much commentary has suggested, but what it lacked in structure it made up for with punch. Because tucked into the meandering statement was circumspect confirmation of what has for some time been an open secret, the fact that she is a lesbian.

Though she gave a moving tribute to Cydney Bernard, her former partner and co-parent to her children, Foster also observed her commitment to maintaining strict personal privacy, comparing the discussion of her private life to reality TV phenomenon Here Comes Honey Boo Boo, and declaring that she has no interest in making her life into a reality show. I don't intend to begrudge her demands for privacy - when you've been in the public eye since your toddling years, the desire to be left the hell alone when you aren't on the public figure clock is perfectly sensible.

But the unfortunate fact is that in seeking to put her sexual orientation into the context of that privacy, Foster somewhat misrepresented one of the more sullied and sad aspects of American popular and political culture. And that would be the hateful, and brutally enforced homophobia that forced generations of gay and lesbian actors so deep into the closet they shared a zip code with Mr. Tumnus, lest their lives and careers be ruined.

Frankly, the claim that all of it boils down to 'privacy' cannot be seen outside of that context, and it is disingenuous to attempt to do so.

We don't even need to dig deep for obscure examples that decimate any claim that enforcement of privacy isn't a side effect of bigoted societal outcomes. Prior to the 1970s, as the gay rights movement began to achieve small successes, and the American Psychiatric Association declassified homosexuality as a mental illness, Hollywood history was replete with gay and lesbian - but especially male gay - actors forced to do unspeakable psychological damage to themselves in the quest to protect their careers from hateful guardians of moral behavior. Rock Hudson is the most famous of those forced into bearded marriages, and of course Liberace famously sued a tabloid - and won! - to quash allegations that he was gay. But these men are hardly unique.

And even when the era of forced-bearded marriages came to an end, being openly gay could still hurt a career. Rupert Everett, just for one example, has famously complained that coming out of the closet as early as he did significantly set him back, and he bitterly advised against it in a 2009 interview. Notably, he was out in the early 80s, a time when it was more common for people like Morrissey and Stephen Fry to embrace celibacy rather than live openly gay, than it was for a public figure to be a known homosexual. Gay and lesbian actors thus still either offered up the pretense of heterosexuality (Rosie, for instance, feigning lust for Tom Cruise* on her talk show), or as was increasingly common going into the 1980s, erecting a wall of iron-clad privacy, a complete refusal to discuss one's private lives in any substantial way whatsoever. And of the latter group, Jodie Foster is perhaps the most famous of all.

We all know how rumors had followed her throughout her career - rumors, I feel compelled to make clear, were prurient and largely about turning her life into a scandal, as was generally the case with all rumors about a star's homosexuality. Through it all, at least until 2007, she had a strict policy of total silence on any aspect of her private life. That is her right, but consider that no heterosexual actor has ever felt the need to maintain such strict privacy that they refuse to even acknowledge they are in a relationship at all. There's a good reason for that: no heterosexual actor would ever face punishment or ostracization for admitting they're in a straight relationship with a person of the opposite sex.

We are fortunate to be living in an era when the sexual orientation of celebrities does not, for the most part, appear to be even remotely a big thing as in years past. White Collar star Matt Bomer's status as a TV sex symbol has not been affected one whit by his confirmation a year ago that he's gay, and just last week, actor Matt Dallas came out to barely any reaction beyond 'oh neat, you're engaged, congrats.' So much progress has been made, in fact, that even film maker Lana Wachowski's confirmation of her transgendered status didn't generate tawdry gossip (and thank the gods for that,) only support.

But the acceptance of GLBT people as ordinary is a very recent phenomenon. It was made possibly only by the tireless work of two generations of GLBT activists willing to stake their lives and careers on the notion that being who they are is as normal as being, like me, a straight male. Jodie Foster is indeed entitled to be left alone, but the next time she speaks in public, it would be nice if she could acknowledge that her no-big-deal official outing of herself was made possible only thanks to that hard work.

* Yes, I recognize the insane amount of irony suggested by that. There are Möbius strips that are easier on the brain.