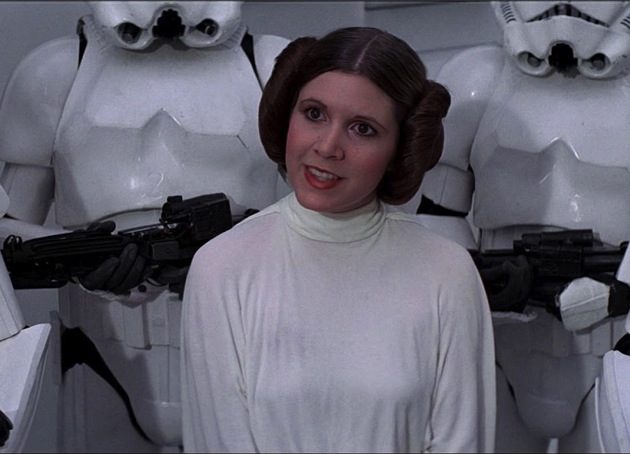 Despite the fact that Princess Leia is every bit as iconic as Luke Skywalker and Han Solo, the fact remains that the entire Star Wars series has a total of five women with speaking roles, and only three of them — Padme/Amidala, Leia, and Anakin's mother — count as major characters. It's no wonder then, that Anakin had to be conceived by the Force itself, since apparently, there aren't enough women in the Star Wars galaxy to populate a trailer park, much less a multi-planet republic, by normal means.

But could the force finally be with the double-X chromosome squad for a change? If a cryptic tweet from Slashfilm's Peter Sciretta hasn't been misunderstood, the answer is a solid "possibly"!

'Star Wars Episode 7' Plot Possibilities
Now obviously, we're still very much in early speculation mode for Star Wars Episode VII. Will it be burping- and Jar Jar-free? Will it be based in-part on the Expanded Universe? Will we see aging stoner Harrison Ford playing an elderly Han Solo, like The Dude? Who knows?! But speculation is the fuel on which the Internet runs, so far be it for me to say anything other than 'yes, all those things will be true.'

The biggest mystery is, of course, just who the new films are going to be about. Everything, from the children of our original heroes, to the further adventures of Geriatric Luke, has been baselessly suggested, but Disney is keeping mum for now. Of course, even if Disney is bringing the full power of their enormous secrets-keeping machine to bear (seriously, how did they keep the Star Wars deal a secret for so long?), now that Episode VII is almost certainly in the full flower of pre-production, tidbits are bound to come out.

Who said the lead character in Star Wars Episode VII is going to be a male star? 🙂

According to a Slashfilm  Star Wars round-up post by Germain Lussier on Friday morning, Sciretta asked that this tweet be added to the article, but that “he couldn't say anymore,” which strongly suggests he knows something specific, or at least wants us to think he does. The comment could be taken in any number of ways, of course. He might simply mean they'll be casting a relatively unknown male actor in the lead. But the fact that he felt the need to specify male, rather than leave the question of gender blank, suggests the tantalizing possibility of a female lead.

And yes, the sound you hear is millions of voices, crying out, "About damned time."

As for who this character could possibly be, don't look to the established Star Wars Expanded Universe for answers. The official canon is incredibly convoluted at best.  (See for yourself here.)  It's a tiered system in which the movies, and George Lucas himself, overrides everything else. Sure, we might see fan favorite Mara Jade, or even Leia and Han's daughter Jaina, but given that public statements suggest the new films will plot their own course, I expect a completely new character.

Assuming for a moment that Episode VII will mine the Expanded Universe, who would you like to see take the postulated female lead? Let us know, and feel free to argue about continuity, in comments.