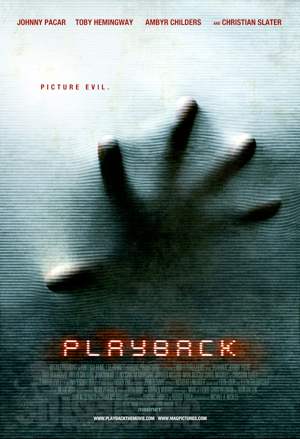 2012's lowest-grossing film has been revealed, and people, this one kind of hurts.

[Related: Domestic Box Office Rises In Dollars And Audiences In 2012]

The Christian Slater horror film Playback gathered an astonishing $264.00 – yes, that's two hundred and sixty four – in theaters. Well, theater, to be exact; it only showed for one week in a single cinema. The figure gives Playback the honor as 2012's lowest grossing film of the year. It earned $252.00 on opening night and just 12 dollars more during the following week, after which it was pulled. It has since made its way to VOD via Netflix and Amazon Prime.

That has got to hurt, but when your career includes Gleaming the Cube and Hard Rain, at least you're probably prepared for the emotional toll. Still, it makes me wince, even 20 years later, every time I'm reminded that I once actually liked Christian Slater movies. At least Heathers and True Romance still hold up*!

As 2012 comes to a depressingly apocalypse-free conclusion, it's not surprising that we're seeing the last, painful lists of ignobility slipping out at the last minute. What better way to prepare ourselves for the new year than by embracing obstacles head on.

If yesterday's news of the most pirated movies proves that a bumper crop (cash-wise) for Hollywood doesn't mean there still isn't a problem with pilfered films, today's offers unexpected confirmation that F. Scott Fitzgerald might have been right about there not being any second acts in American lives. At least for formerly successful actors.

So at least we can all take comfort that our English teachers may have been onto something after all.