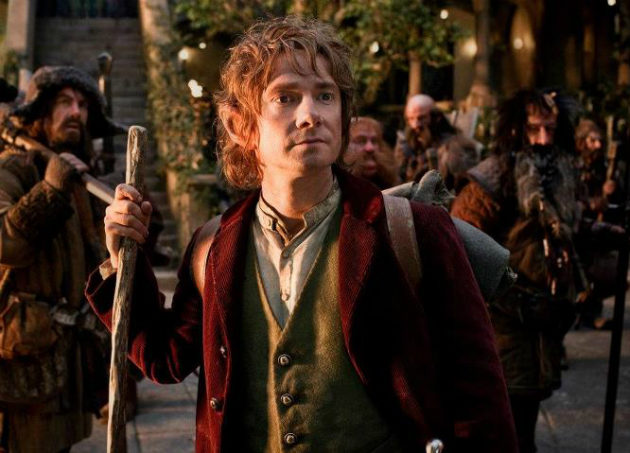 The camps are entrenched, the battle lines drawn, and the barbs and quips are flying like cannon shot across the divide. But as the debate rages on Movieline -- and on other sites across the web -- over Peter Jackson's directorial decision to film The Hobbit: An Unexpected Journey in 48 frames per second (as opposed to the more traditional 24), no single quip seems to draw the ire of the "traditionalists" more than this one, aimed square in the chest of the old timers: Resisting 48 frames is like resisting color.

"If you grew up seeing films in black and white and suddenly start seeing films in color, some people are going to have the reaction 'Wow, that's great!' and other people are going to have the reaction, 'That's not moviemaking! Films should be made in black and white! You're losing the mystery of how to deal with tonality, you're sacrificing that to deal with color!'" Letteri told Movieline in an exclusive one-on-one chat.

"But if you grew up with only seeing color, you don't know that. Just talking to the people that have seen it so far, and obviously that's been a very limited audience, the younger ones that I've spoken with don't really have an issue with it because they're not so ingrained with what 24 frames mean. To them they're just watching a movie."

A movie that doesn't actually look like a movie, opponents might counter, since one of the effects of shooting at 48 fps — which projects 48 individual static shots every second — is to give your brain twice as much visual information as compared to 24 fps. In turn, this extra visual information translates to a more immediate and "real" experience for viewers, lifting at least partly the screen's veil (think of the look of many American soap operas). It's a more visceral experience. But is it an equally cinematic one?

'It's a choice," Letteri insisted. "You have time to adjust. [Then you can ask] Do I want this or do I not want this?"

According to Letteri, it's a choice that may be driven in the future more in tandem with the choice to go 3-D, or "stereo," as Letteri refers to the process, than it is from a narrative compulsion, in large part because of how the human brain interprets three-dimensional filmmaking. In all films, objects not in focus or that are moving very fast will have blurriness (or "motion blur" in the case of quick moving objects). In 3-D, however, this same blurriness can cause your brain distress since it naturally wants to interpret the image as it does the real world, Letteri explained.

"I think it's beneficial with stereo," Letteri said of the high frame rate process. "One of the artifacts of stereo — for example, if you look at something that's out of focus, maybe an over the shoulder shot, this is where stereo differs from the real world. In the real world, wherever your eye focuses that object snaps to focus. So if you're looking at a big screen and your eye wanders to something that is out of focus, your eye expects it to go into focus. It can't. So you're sitting there focusing on an out of focus object. That's one of the things that causes your brain [to fritz]."

"The same thing also happens temporally," he continued. "If you've got an object moving across the screen in the real world your eye wants to be able to track that and your eye wants to see it in focus. But because you've already photographed that with this motion blur, your eye cannot focus on something in space that's blurry. Again, in the real world you never see that. It's one of those other things that in 3-D your brain says something's not right here. Well, if you go to high frame right, it is in focus. Your eye can focus on these fast moving objects or even slow moving ones and the details always there. So your brain can make sense of it."

Of course, if 48 fps can reduce blur, enhance 3-D, and make for a more absorbing experience, then why stop at just 48 frames per second? For those who don't like the process, it may be time to batten down the hatches. They aren't.

"Oh no, Jim [Cameron] is considering 60 fps [for Avatar 2]," Letteri, who won an Oscar for his groundbreaking work on the original Avatar said. "That's closer to where persistence of vision almost disappears. In fact, these discussions came out of when we noticed the effect of that in Avatar. And we were brainstorming with Jim on how to fix it — well, this is inherent in the photography and the only thing you can do is go shorter shutter, butt that introduces strobing, or you can go higher frame rate. We started experimenting with higher frame rate [from a standpoint of] how do we solve the problem?"

"It looks," he added, sending up either the victory flag or the white flag, depending on your opinion of the movie-like quality of movies, "like something happening live."