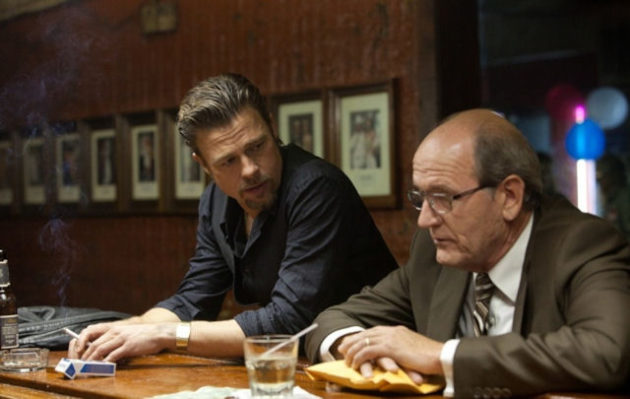 Killing Them Softly is set in Boston, maybe. Someone mentions living in Somerville, a scattering of the characters have the accent, and they talk about going down to Florida. But the film was shot in New Orleans, often in the industrial edges still ragged from Hurricane Katrina, and the only people who seem to inhabit its universe are gangsters — high level ones with pretentions of civility and hardscrabble losers struggling to get a few dollars together by way of hazardous schemes.

What ties this abstract, violent place to the real world is the 2008 presidential election, which provides a backdrop for its tale of an ill-advised robbery and the guy brought in to clean up after it. There's George W. Bush talking about the bailout on a TV in the corner as two guys knock over a card game; there's Barack Obama promising change on a billboard over a neighborhood filled with empty lots and abandoned houses.

It's a neat idea, matching the brisk kill-or-be-killed business of unforgiving criminal life to an America staggering from the economic crisis. But as in his last feature, the gorgeous and stiltedly self-conscious The Assassination of Jesse James by the Coward Robert Ford, Australian filmmaker Andrew Dominik shows a tendency to lean too hard on his symbolism rather than letting it exist as part of the whole. In Jesse James it was the tying in of the last days of the outlaw to a meditation on celebrity. Here, it's the capitalism-as-a-disease parallels on a national and narrative scale that start to feel on the nose long before a character barks "America's not a country, it's a business — now fucking pay me!" and Barrett Strong's "Money (That’s What I Want)" plays over the closing credits.

But when Dominik, working off his own screenplay adaptation of a novel by George V. Higgins, is less focused on trying to make an important movie, he turns out an indisputably fun one, a stylish and flamboyantly macho affair that cribs pleasantly from Mamet, Blue Velvet, Tarantino and Scorsese. The film starts with Frankie (Scoot McNairy), a ferrety guy recently out of prison and eager to convince his Australian pal Russell (Ben Mendelsohn, memorably scary in Animal Kingdom) to get in with him on a job.

Russell's working his own scheme involving kidnapping purebred dogs and using the money to buy an ounce of heroin and become a dealer, but Frankie's pal Johnny (Vincent Curatola) has what he claims is a foolproof gig. They'll rob a poker game run by a guy named Markie (Ray Liotta), who arranged to hold up his own game once in the past and got away with it. The games are protected, but if his gets robbed again everyone will assume he's the one behind it.

Killing Them Softly starts off with its main heist, if it can be called that, and then turns to the fallout, letting things rattle along for a considerable amount of time before introducing Jackie (Brad Pitt), a guy who can't really be described as a hero or antihero. Jackie's a fixer and a hitman who's filling in for the last go-to guy, Dillon (Sam Shepard, glimpsed only in flashbacks), and he's a competent, no nonsense figure in a world full of fuck-ups. Dominik's film is interesting in that the crimes themselves, whether stick-ups or killings, are rarely difficult — it's the aftermath that gets people in trouble, when they can't keep their mouths shut about what they just pulled off or don't know when to cut their losses and get out of town.

Dominik shows an open appreciation for his actors and for the way tough guys, aspiring and genuine, talk to each other — and Killing Them Softly is as much centered around talking as it is action. Pitt, playing a practical know-it-all who falls somewhere between Rusty Ryan and Tyler Durden, is terribly entertaining shooting the shit with Driver (Richard Jenkins), the representative of the unspecified group who hired him, the two complaining about the new "total corporate mentality" like disgruntled office workers on a smoke break. Later, he brings in Mickey (James Gandolfini) from New York to help out, and watches him with worried calculation as he turns out to be in rough shape.

If gangsterism is just capitalism in a more raw form, then Jackie is the creature best suited for this world. He knows the rules and enforces them without prejudice, because it's just business and this is just a job. Killing Them Softly doesn't give that idea its intended sting. The film wants to be angry and scathing, but, to its credit, enjoys its characters and its mechanics too much to have a sharp edge. Whether it's showing someone's death in a luxurious slow motion spray of bullets and glass or lingering as someone drunkenly reminisces about a girl he sometimes sleeps with but has no hold on, the film is too fond of its rich details to allow them to become damning symbols of the system in which they can be found.