Andrew Dominik does not look like a guy who could teach this country a lesson. With his floppy hair, fashionable glasses and ever-present cigarette, he resembles the kind of international hipster you'd find brandishing his American Express black card in Manhattan's Meatpacking District on a Thursday night. But don't be fooled by appearances. 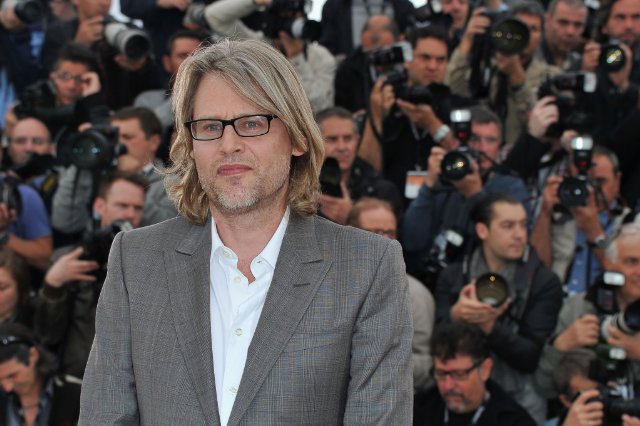 With the help of Brad Pitt and an impressive ensemble of actors that includes James Gandolfini,  the exquisite Ben Mendelsohn and a breakthrough performance by Scoot McNairy, Dominik has made an acrid — and memorably violent — cinematic statement about the state of the American Dream that should resonate with anyone whose job has become a kill-or-be-killed battlefield in the wake of the 2008 crash.

Although Killing Them Softly is an adaptation of George V. Higgins' 1974 novel,  Cogan's Trade, Dominik, who wrote and directed the movie, set the picture in the middle of this country's 2008 economic meltdown and presidential election. (News coverage of both George W. Bush and Barack Obama figures in the background.) Pitt plays Jackie Cogan, a mob enforcer sent to a grim-looking, rain-soaked city — the picture was shot in New Orleans — to investigate a poker-game heist, but the lowlife characters in this movie could be Wall Street bankers, film producers or overworked bloggers running and gunning to survive one more day in the rat race.

There's nothing like an outsider to point out the chinks in America's armor, and the New Zealand-born, Australian-bred Dominik bludgeons a number of this country's sacred cows and concepts, from Thomas Jefferson, who's dismissed as a hypocritical "wine snob," to "E Pluribus Unum" to the hopeful (but possibly empty) rhetoric of Barack Obama.

"America's not a country, it's just a business," Pitt's character says at a key moment in the film, and given the actor's reputation as a righteous liberal dude, it's a brave performance. I don't think that even Dominik would admit this, but beneath the noirish storyline, Killing Them Softly  echoes the lyrics of the Who's classic song. "Won't Get Fooled Again":  "Meet the new boss/Same as the old boss."

In a frank and fairly amusing interview, Dominik, whose credits also include the excellent Chopper and The Assassination of Jesse James By the Coward Robert Ford,  shared his views on the reelection of President Obama, the "masculine confusion" that is prevalent in Killing Them Softly, his next planned picture, an adaptation of Joyce Carol Oates' novel about Marilyn Monroe, Blonde, and whether Brad Pitt can remember what it was like to be normal.

Movieline:  After seeing Killing Them Softly, I've got to know if you were rooting for anyone in the presidential election.

I ask because the message of your movie seems to be that it doesn't matter who's running America from the Oval office.

Well I think, obviously, that the president's powers can be fairly limited. But Obama was a better option than the other guy.

That seemed to be the rationale of a lot of voters this year.

I really believed Obama when he spoke in 2008, but  I remember watching his victory speech after this last election and it was the same speech. Exactly the same speech.  I felt like he didn't even believe it anymore.  He seemed to be tired of saying the same thing.  He even made the same joke about the dog.

Your film is distributed by The Weinstein Company, which is co-chaired by Harvey Weinstein, an avid supporter of President Obama. Was there any discomfort with the political aspects of your film?

How tight is Harvey really with Obama?  He says he's talked with Obama.  I'm sure Harvey feels tighter with Obama than Obama feels with Harvey.  You know what I mean? But, yeah, he was uncomfortable about that stuff.  And I think Brad was, too. But I don't know that the movie's really pointing its finger at Obama, specifically.  It's pointing its finger at the lie with which American was constructed — this idea that we're all equal. Which clearly nobody believes.

It takes an outsider to tell us that. What made you decide to take a 1974 George V. Higgins novel and set it in 2008 at the time of  the 2008 economic crash and the presidential election?

I guess it was everything going on at once.  I found the book, and I needed money. And everyone around me needed money.  All they were talking about was the economy.  I realized that the movie was the story of an economic crisis, and I started to see parallels between this little story and the bigger story.

I've always suspected that crime movies are really about capitalism.  I didn't watch The Sopranos and think Tony Soprano was a sociopath.  He just looks like a normal guy with normal problems to me.  So I felt like maybe here's an opportunity to make a self-conscious crime film. Fiction is how we organize reality — but what are we trying to organize when we watch crime movies? I guess it's the reality of existing in a dollar-driven society.

You mentioned The Sopranos.  At its core, that series was a epic parable about the George W. Bush era, and, in some respects Killing Them Softly felt like an extension or a kindred spirit of that show. Were you inspired at all by the universe that David Chase created?

I love The Sopranos.  It's a fucking great, great show.  But not directly as far as the movie was concerned. There are actors from the series in the movie, but I guess when you're looking for goombah-type guys, David Chase found them all.  So there's really no getting away from it.