A Tale of Two Directors: Alfred Hitchcock, J. Edgar Hoover, And The FBI's Eye On The Master Of Suspense

When he wasn't rooting out Communists, cracking down on the mob and spying on civil rights leaders, FBI head J. Edgar Hoover toiled as a one-man culture warrior battling Hollywood decadence. He prevented Charlie Chaplin from reentering the U.S. because of his leftist political views, and he condemned Frank Capra’s It’s a Wonderful Life for its “rather obvious attempt to discredit bankers.” So what did he have to say about Alfred Hitchcock, who gave American moviegoers new and strange things to fear?  Not a bad word.

The only questions anyone's asking about Hitchcock these days are just how much and what kind of a creeper was he? The famed director’s wandering eye, his sexual obsessions, and less-than-decorous urges roil at the center of Hitchcock, the just-released biopic starring Anthony Hopkins and Helen Mirren, as well as last month’s The Girl, the HBO film with Toby Jones and Naomi Watts.

As The Birds actress Tippi Hedren claimed earlier this fall, the Master of Suspense could be masterfully cruel and unforgiving. But as far as his popular image as an artiste-provocateur goes, there’s probably more than a little self-mythologizing — or branding, if you’d prefer — in that ironic Englishman persona, the casually sadistic remarks about actors, the pretensions to finding truth in nightmares.

It’s that last detail that fuels Hitchcock, a tempting portrait of “Hitch” as a crowd-pleasing, truth-telling anti-hero — not unlike Howard Stern and Larry Flynt in their respective biopics — who shows moviegoers the dark things they didn’t know they wanted to see. But was his threat to the American psyche all smoke and mirrors? That’s certainly what Hitchcock’s FBI file, obtained via MuckRock.com, suggests. 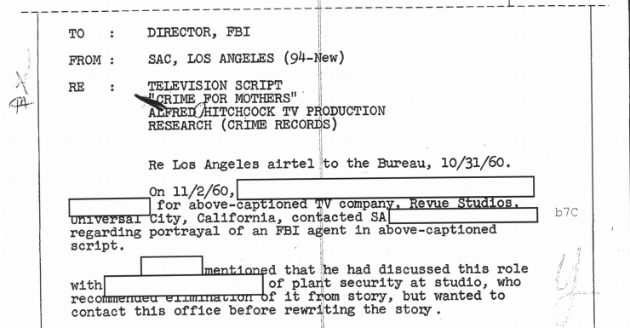 Hitchcock’s file doesn’t begin until October of 1960, four months after the successful release of Psycho, which casts serious doubt on Hitch’s claim that the FBI followed him for three months in 1945 after he discussed uranium with a Caltech professor as research for his next film, Notorious. (Donald Spoto, a four-time biographer of Hitchcock, also concluded in The Dark Side of Genius that the FBI investigation was likely apocryphal, declaring that the “extremely sensitive” director would have been “emotionally incapable” of making a film under government surveillance.)

In fact, the contents of the FBI file have much more to do with Hoover’s obsessions than with Hitchcock’s. Whatever paranoia and “extreme sensitivities” Hitchcock suffered, Hoover suffered doubly so. The bulk of the file has to do with a seven-month surveillance on a single episode of Alfred Hitchcock Presents that illustrates the acute obsessiveness of the FBI’s fearsome but fearful director. Through unrelenting pressure and undeserved authority, the Bureau convinced Revue Studios, which produced A.H. Presents, to eliminate a minor character, an FBI agent who instructs a would-be kidnapper that abduction is illegal, from the episode “Coming, Mama.”