Whether you're a devoted Twihard, an absolute hater, or someone who's still just completely bewildered by Stephenie Meyer's oeuvre, you must give the Twilight saga this — these stories are incredible, unabashed distillations of teenage (or just teenage-at-heart) female fantasy. Male equivalents, like, say, most superhero stories, have come to dominate the mainstream and fill the summer blockbuster schedule to such an extent that the Twilight films are striking simply in how very different they are. And how crazily well they target certain girlish pleasure centers with their themes of eternal romance, playing house with the advantages of unlimited vampiric wealth, and being the one that everyone wants without even trying.

The wildest though hardly the best chapter of the series, franchise closer Breaking Dawn — Part 2 will also be basically bulletproof in terms of box office. That leaves the film free to indulge in the giddy insanity that also colored Part 1, with its bruising, bed-breaking sex, accelerated monstrous pregnancy and Cronenbergian birth sequence. Like its predecessor, Part 2 was directed by Bill Condon. It picks up with Bella (Kristen Stewart) freshly vampirized by her husband Edward (Robert Pattinson) after the difficult birth of their daughter Renesmee — initially a CG-enhanced infant and, later, Mackenzie Foy — and skips the surreal, semi-metaphorical treatments of sex and fecundity for more movie-friendly but less interesting action.

Renesmee, you see, is aging rapidly, moving from baby to adorable little girl at an unusual rate — and when she's spotted bounding high in the air the way only a mini half-immortal can, she's mistaken for a child vampire, the creation of which is against the rules. The sinister Volturi, led by Aro (Michael Sheen, in a performance that goes beyond camp to a higher, gigglier level), prepare to descend on Forks, Washington to dole out punishment, while the Cullens, prompted by one of Alice's (Ashley Greene) visions, go about gathering allies to their side from covens around the globe.

Breaking Dawn — Part 2 ends with a credit sequence for the entire series, including actors who don't appear in this installment, and watching Anna Kendrick and other actors who played Bella's classmates flash on screen, it's hard to think back to when the series was merely a dreamy supernatural high school drama. With its hybrid offspring, soulmate-bonding with babies, international array of bloodsuckers (including Lee Pace as a character I'm choosing to call Revolutionary War Vampire) and an outrageous battle sequence in the snow in which heads are popped off bodies like caps off of beer bottles, this film is very far from the normalcy of Edward and Bella meeting in biology class, or from anything that makes sense. 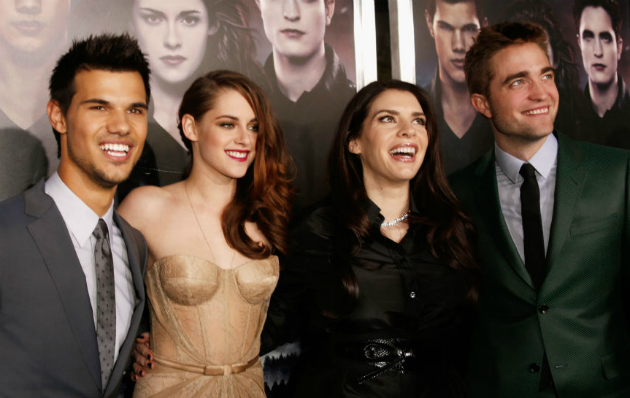 At this point in the franchise our central couple is, after much pining and love triangulation, a done deal, and while the two obviously have troubles to deal with, they're no longer of the impossible-romance variety. Bella and Edward are irrevocably in this together as they prepare to face a threat to their family and their home, which may be why this installment lacks the irresistibly overheated melodramatics of the earlier chapters. With clumsy CGI and awkwardly choreographed fights, these films have never handled action well, but it's the main focus of the latter half of Breaking Dawn — Part 2.

It's Jacob (Taylor Lautner) — who obligingly doffs his shirt under cheerily contrived circumstances not far into the film — who's left to carry the torch for difficult love stories by imprinting on and forever hovering around Renesmee, which is actually creepier when she becomes a girl than when he's mooning over an infant. There's no way for this development not to read as ridiculous, and the way Lautner chooses "mildly pained" from his limited array of expressions appears to indicate he agrees as he lingers near his potential child bride.

Of course, a lot of Breaking Dawn — Part 2 is ridiculous, often knowingly so, with its winking moments of fan service and a gigantic array of characters, many of them signaling their cultural identity with amusing broadness. (The Amazonian vampires were entertaining, but it's the gothy Romanians who really won me over). The film actually packs in so many new characters and explorations of superpowers (Bella, it turns out, is a "Shield") that it feels like it's just trying to avoid having to deal with its protagonists, unsure of what to do with them now that they're together and married. Aside from a tastefully shot sex scene and one closing affirmation of devotion, the film plays down their relationship now that it's not plagued with reasons the two can't be together.

And there have been so many. As ludicrous and enjoyably over-the-top as Breaking Dawn — Part 2 can be, it's not a terribly satisfactory capper to the Twilight franchise because it sets aside the strange undercurrents of desire and danger that defined the series and made it such a hair-tearing conundrum for feminists mystified by the appeal of its passive blank of a heroine. Bella's an empowered badass in this last installment, wielding newborn strength while showing unusual self-control and learning to use her new abilities — and that's why things feel off.

Bella's foremost qualities in this series come through in her being protected, being rescued, being adored — she's a fantasy of finally being recognized as precious after always having been undervalued. And as Bella and Edward ride off into the glittery sunset together to live in their fancy cottage with their walk-in closets and mutant child, it's nice to see Bella holding her own, but also a curious final twist on the Twilight saga's darkest appeal — the lure of being the thing that is fought over.

The 'Twilight' Scream-O-Meter: Notes From The 'Breaking Dawn 2' Premiere

Taylor Lautner On Jacob And Renesmee's 'Breaking Dawn' May-December Relationship: 'I Was Worried About It'