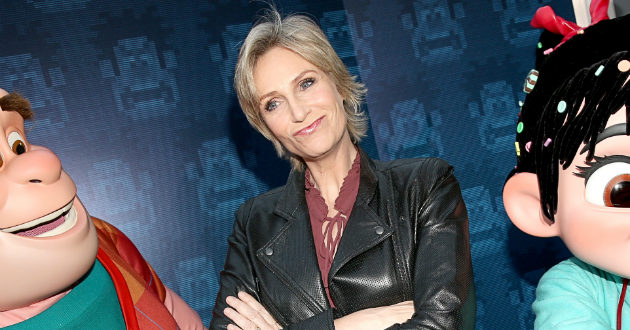 Movieline sat down with Lynch to talk Wreck-It Ralph, the fun of bringing Calhoun to life, and how the film's deeper themes of self-determination and destiny resonated with the once-aspiring actress who left home to pursue her dreams. But first, the whip-smart Glee fave spitballed an impromptu back story for her space warrior alter ego, known in the film only as Sergeant Calhoun...

Only after watching the movie did I learn that your character’s full name is Sergeant Tamora Jean Calhoun. How much of a life before the game within the movie did you imagine for her?
Tamora Jean. Tammy Jean! Get out of town. I’m going to write a whole story about her right now: She grew up as Tammy Jean in Alabama, and when she joined the military right after high school she said, “I’m no longer Tammy Jean – I’m not even Tamora Jean. I’m just Calhoun!” You know, there was a back story for my character that is revealed in the film; she was in love, and her husband-to-be was killed by the Cy-Bugs.

I wasn’t sure if anyone involved had seen MacGruber, but MacGruber shared a similar fate.
With Will Forte? I love him. I wonder if we ripped it off from him…

Did it mean a lot to you to be a part of a Disney film like this? How did you get the call to voice Calhoun?
It was huge working with Disney – I mean, to be in a Disney animated film was so preposterous it wasn’t even on my bucket list. So that was a huge thing. Then John Lasseter, who heads up Disney Animation these days, invited me and Jack [McBrayer] and Sarah [Silverman] and a bunch of other great character actors to fly up to San Francisco about two and a half years ago to do a table read. It was like a field trip, we all met at the airport and jumped on a plane, then jumped on a bus… We spent the day with John and within six months we were recording here in L.A. They showed us a rough rendering of our characters and everything involved; Richard, our director, has been working on this for four years. He’s been in a little cave literally for four years and is just now seeing the light of day.

Researching arcade games must have been more fun than your average movie prep work.
I learned a lot about this world because I’m not a gamer, and am still not a gamer. But the whole world of the arcade, that resonates with a lot of kids.

It’s geared toward children of today who know games like Call of Duty, which Hero’s Duty is based on, but there’s a lot more for the now-grown adults who played 8-bit games as children decades ago. Were those games in your life at all when you were a kid?
Not a lot. I think I played Pac-Man a couple of times and I played Asteroids in college, but not obsessively or anything. Just at the bar.

Your character is, interestingly enough, one of the only representations in Wreck-It Ralph of modern gaming - she's the heroine of a first-person shooter called Hero's Duty, and one of the sole female characters in this male-dominated world. But she’s also got a soft core inside that Jack’s character, Fix-It Felix, is able to find.
He fixes my heart!

And he doesn’t even need to use his magic hammer.
No, just by looking at me with the honey glow. “Well, I’m getting the honey glow!”

You two have so many great lines; were they all written beforehand or did you slide in some improvisation?
They were all written, so I can’t take credit for them. We did improvise a little bit because I got to work with Jack in the sessions, but not a lot, but that always brings the chemistry element into it. Rich really loved that and the stuff we did in those sessions, he used it all.

My favorite Calhoun line is “Flattery doesn’t charge these batteries.” I might try to use that in real life, maybe in a bar situation.
Go for it! [Laughs]

The big theme in this film for Ralph is that he’s turning 30 years old, facing a life crisis.
He’s turning 30! I’d never looked at it that way – I’ve been going into adulthood, have been doing the same thing for 30 years and now I’ve got to shake it up.

Wondering if you’re on the right path in life, or if that’s even something you can change - is that something you feel you can relate to?
Oh, yeah. More about when you’re 20 and stuff like that, but when you’re going into 30 there’s a certain set of expectations that you should be into your adult life now, you should be into your purpose, and a lot of people aren’t. And, you know – should’ve, would’ve. Who knows when the right time is for that? But I think Ralph is at a point where he’s been doing the same thing over and over for years, how many times a day, countless times a day, and he’s not getting any appreciation for it. He’s not enjoying it. He’s not getting invited to any of the parties; he sleeps in the garbage dump. It’s awful. So he says, “You know what? I’m not going to do this anymore.” He thinks being a hero is about getting a medal, but he finds out that being a hero is all about his relationships. He meets Vanellope and cares about her and champions her, and he comes back to where he started, like Tennyson says, and it’s like he’s seeing it for the very first time. Everybody appreciates him now because when he left the game fell apart; he’s like the prodigal son. He takes pride in his work and he knows it’s not about a medal. I love the end of the movie; I burst into tears at that moment.

Have you had any Ralph-like moments of revelation in your own life?
Getting out of my hometown; going to college was what everybody did, but when I went to graduate school I didn’t have any support for that. Wanting to be an actress, it was like, find something you can do and learn to type. I got offered a scholarship to Cornell to go to graduate school and although my parents were like, “Wow! That’s really great,” they were like, “Theater? Theater?” I was like, I’m going to do it anyway. I hopped on a train and went to Ithaca, New York. I worked to make money and was given a fellowship, and I taught a class in order to make money, but I did it on my own.

What did you teach?
Acting. It was part of my fellowship. I think we made $120 a week or something, but it was enough. It was enough in those days, anyway, to pay my rent and keep me in beer and coffee. The essentials! So I think we all have those things where we go, you know what – I’m not getting a lot of support here for this, but I just have to go. I have to go do what I need to do, and I have to take the chance. I can’t take one more day of being in the doldrums because that hurts too much. That’s what I love about this film; these are games, but they’re such metaphors for life. You’re playing your game, but you can “jump” your game.

Wreck-It Ralph is in theaters; read along as Movieline gets way existential with star John C. Reilly here.