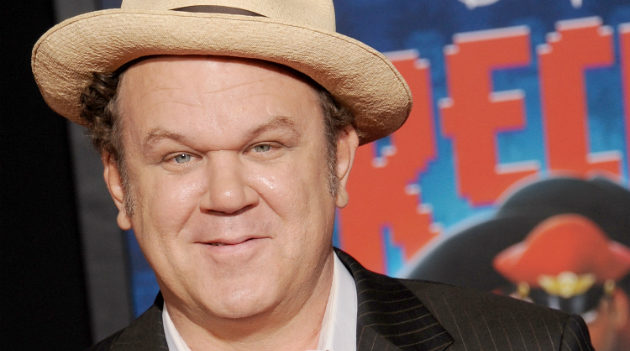 Is Wreck-It Ralph a video game flick for kids, or the saga of a destructive 30-year-old loner on an existential journey of rediscovery? We put the bigger questions to John C. Reilly, whose smash-happy villain Wreck-It Ralph goes game-jumping through his arcade world in search of his inner hero — crashing a first-person shooter and a candy-colored racing game in the process — in the Disney animated adventure.

There’s a lot for children to enjoy in Wreck-It Ralph, but adults may find even more to grasp onto in Ralph’s story – he’s basically just turned 30, is having an existential crisis, unsure of his destiny and his job and what he’s supposed to be doing with his life.
It’s no accident that Disney is over the moon with the age range of people that are enjoying the movie already. Yeah – there are some deep things said in the movie, in a very fun, video game world kind of way.

The kids watching it may not understand some of these life crises for a few decades.
They will one day!

Was that something you had in mind as you gave voice to Ralph? Did you see him as a 30-year-old in crisis?
I wasn’t so focused on the time span of it, and I wasn’t thinking of it so much as a mid-life crisis or existential crisis kind of thing. It was much more emotional, and it was immediate, too – “Why doesn’t anyone like me?” “Because you smash things!” I know, but that’s just what I do for a living! Give me a break! To me, the thing I was most conscious of was someone in the beginning of the story who doesn’t know himself, and he can’t accept who he is, because he doesn’t really know who he is. That’s one of the things that the journey he goes on gives him when he’s put into these tight spots and is called upon to be something bigger – he rises to the challenge and learns who he is, and accepts who he is. And then everything’s fine!

Don’t give away the ending!
Well… I was talking about people in general. But everything might be fine in the movie. Who knows?

Do you relate to Ralph’s quandary of being defined by the job that he does?
Yeah. I think that’s true – I noticed, working in France, that’s just not something people do. “What do you do?” That’s not the first thing they ask you at a party. I can’t remember what is the first thing they ask, but they’re a lot more private and people don’t share personal information quite so readily there, for whatever reason, they’re a little more formal. But here the first thing anyone asks is “What do you do?” So that’s the first bit of information where people start to judge you or size you up. That’s Ralph’s problem, that everyone sees him as what he does.

In your own life and career have you felt that similar feeling of being typecast, or thought of in a way that you wanted to break out of?
Every time I did, I did something else. It doesn’t happen very often. But I’ve done a lot of different stuff over the years and people are always surprised at what I end up in. I’m sure they’ll be surprised to see me in this.

You had an interesting start to your career, with Brian De Palma.
Casualties of War!

All these characters we meet, the hundreds or thousands who exist in Ralph's world from his game and the other games connected to his via power lines, are just the characters within this one arcade.
Right.

So here's the big question: If there are, say, hundreds or thousands of similar arcades out in world beyond the confines of Litwak’s Family Fun Center, does that mean there are potentially many more Ralphs out there? And are they all going through the same existential journey at the same time, in their respective arcades?
Duplicate Ralphs?!

Multiple souls, maybe? What’s going on here?
Wow. I never even thought about that. That’s surprising, after three days of a press junket, to think about that for the first time. I don’t know! Are they all experiencing the same thing at the same time, or is it a Matrix-like situation? This is the next creative leap. The next leap of imagination that people can make after they see the movie. The first one is like, what is it like to be inside a video game, to be a video game character – that could be a sequel, or something. And could you go into the surge protector and into the electricity network… That could be the next destination.

I think you’re cooking up a sequel here! Meanwhile, there’s a moment in the film when Ralph fantasizes about being the toast of the town, and there’s a shot of him on the disco floor. Was that a nod to Boogie Nights's Reed Rothchild in some way?
It wasn’t a nod on my part, because I had nothing to do with that. Unless there was dialogue in the scene, I most likely wasn’t even aware of it.

What were you most surprised by when you watched the film, having taken part in just that one aspect of it?
The level of detail and how many people are in those scenes. The racing scenes in the candy world, it’s insane the amount of work that went into that. I was also surprised at how funny Jane [Lynch] and Jack McBrayer’s scenes were, because I literally didn’t see any of it, I didn’t even see rough cuts of those.

You were paired in the recording booths together with Sarah Silverman, as Jane and Jack were. What’s your fondest memory from recording with her?
She’s awfully fun to be around, she’s a real sweetheart and very funny so it was always fun to work with her.

The ‘doody’ line gets a big laugh in the film.
There were probably six more that she had that were not in the movie! But I like the scene where I have to break her heart, because Sarah was really good in that dramatic scene. That was kind of traumatic actually, that day – for both of us. We’re both right there recording it and she’s screaming, “No, Ralph!” It was a pretty heavy day.