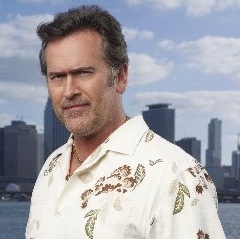 The colorfully candid Campbell was on hand at the Javits Center to draw attention to the remake of Evil Dead that he, Raimi and Rob Tapert are producing.  (The three were producers of the original films as well.)  Set for an April 12, 2013 release by Columbia Pictures' Screen Gems division, Evil Dead will mark the feature debut of Uruguayan commercial producer Fede Alvarez and feature young cast that includes Jane Levy (Suburgatory) and Jessica Lucas (Cloverfield).  The screenwriters include Raimi and hyper-stylist Diablo Cody (Juno).

Like the original, the remake is about a group of young friends in a remote cabin who discover The Book of the Dead and, one by one, succumb to its evil.  But, as Campbell tells Movieline, the comparisons end there.  Read on to find out how the movies will differ, what Campbell really thinks of basketball shorts, actress Jane Levy's performance,  CAA agents and George Lucas' decision to tweak his Star Wars movies. And if you haven't seen Panic Attack!, the short film that got Alvaraez the Evil Dead job, it's posted below.

Movieline: Those shoes are something else. Do you own them or did you rent them?

Campbell: These are mine, baby.

It’s Comic-Con. C’mon, let’s step it up! I’m trying to encourage other people who go to Comic-Con: Put on a nice shirt –and pants, too. While you’re at it, could you press your fucking t-shirt? And what you think about the basketball shorts? Should we just get rid of those?  I’m trying to class this joint up a little bit.

How will Fede Alvarez’s Evil Dead compare to the original?

Higher quality production, better actors, better special effects and a different telling of a similar story. You’ve still got your five kids and a nasty book in an isolated cabin.

Is there an Ash?

Nope. There are no similar characters whatsoever. And we wanted that. That was intentional. We didn’t want anything compared to anything. We didn’t want to put any burden on any actor to act like Ash or to imitate him.

I hear you turned down a cameo in the movie.

Nobody said “yes” or “no” to anything, so that’s false.  We discussed it as filmmakers: Would it be worth it? Should we do it? But the tone of the movie is dead serious. It’s not jokey enough. This not a funny movie. If there’s laughter, it’s nervous laughter. There will not be ha-ha laughter. None. It’s a full-on old-school horror movie with make-up effects.

Alvarez got this gig because of his short film Panic Attack!

That’s what got us started. Fede is a Uruguayan filmmaker. He made commercials, Pepsi commercials. He does Panic Attack! in his spare time.  He puts it out there on a lark. It went viral. Three weeks later, he was literally in Spielberg’s office. He met everybody. His agents are CAA now.  I can’t get those assholes on the phone.

How did he get on Sam Raimi’s radar?

Sam was one of his meetings. They liked each other.  Sam wanted to develop Panic Attack! into a feature, but that got bogged down. Fede was a big fan of Evil Dead, and so he pitched a story that we all liked.  The three of us — myself, Sam Raimi and Rod Tapert — decided to get back involved in this and support this guy. He’s a very smart, talented guy. I mean, he really is too smart for his own good.  [A man in basketball shorts walking through the conference room distracts Campbell.] See?  Basketball shorts. Would it kill him to put on a pair of pants? I hate how right I am.

I’m glad I wore long pants. You were talking about how the Evil Dead remake came to be.

So that’s how it was born. It could have gone either way, you know. The guy had never made a feature film before. He’s telling a story longer than a 60-second Pepsi commercial. That’s a big challenge, and he succeeded on many levels. His actors are good and solid and give great balls-to-the-wall performances when they have to. Fede was also very mature about the whole thing. He’s very respectful of the genre. He’s not making fun of it. He’s not punking it — he’s just telling his version of it. And he didn’t over-shoot it. He didn’t over-edit it. It’s such a well-edited movie, and that’s pretty rare.  Most movies — the editing sucks.  Like, they’ll never hang on a full sentence. They’ll come in halfway through. They’ll cut away after ten seconds.  There’s a lot of shitty work out there.

Where did you shoot the movie?

We shot it in Auckland, New Zealand because we did all the Hercules and Xena shows down there. The Kiwis are top-notch workers; great crew members. So, we just gave Fede all the support that we could possibly give him — a better budget, qualified crew members, good actors.  We liked his script and we left him alone.  You don’t need to sit over a guy’s shoulder.

You turning up on the set would probably be pretty intimidating.

I sat in on the auditions, and some of the actors that came in were like, Nyaaaaaa!  I felt bad because the idea was not to freak them out.  It was to let them know that we’re into it and we’re taking it seriously. And I just think we pulled the right actors. Jane Levy -- I’m going to crown her the new Ash myself.  She’s got it. She’s got it.  You never know, either. We thought she was good in the room, but you get on a film set and what are they like?  Are they tough? Are they pussies? Are they assholes? Are they crazy?

Tough. And Jane was a tough little shit, too. Really tough. I asked her in the room:  “How are you with extensive special effects for an extensive period of time. Have you ever done that?”  No. “Well, do you know what that’s going to be like?”

It’s the fucking worst experience you can think of. It’s terrible for your skin. You’re an hour and a half, two hours putting it on.  You shoot a 14-hour day, and it’s a hour to take it off. Then you start the whole damn thing over the next day. This goes on for 10 weeks.  I wanted to hang myself after those movies. And we pushed every actor to the limit.  Jane, we pushed her over the edge.

You said it, not me.

You said you were going to crown her the new Ash.

If they want me to crown her, I’ll crown her — because I support her. I’m really impressed with what she did.

Could this be a trilogy in the way that the original Evil Dead movies were?

Easy, but you have to talk to Fede about that because I don’t know if he would do it.  He’s got lots of crazy ideas.  I want to go to double bills. The original Evil Dead paired with the remake. It would be a great midnight double bill.  Alamo Draft House, Austin, Texas.  Lines around the block -- I’m telling you. I’ll go introduce it myself.

If you could fix anything about the original Evil Dead movies, what would you do?

I wouldn’t because that’s pussy filmmaking, man.  It is.  You see the garden hoses shooting shit?  Yep, that’s right!  We did the best we could, pal. In 1979, we got the movie in the can for $85,000.  You’re going to get what you get. We’re not George Lucas going back to fix our effects. Sorry man, you blew it. You got to get over it. You can’t obsess like that. That’s cheating.

What’s next for you?

I’m finishing Burn Notice. I’ve been six years on that spy show for USA. It’s been a fun show. That’s my day job, and it eats up seven months out of my life. So the other five months I don’t feel like doing anything. The last break I just worked on developing a bunch of new scripts because you can’t do stuff without scripts. I’ve got three new ideas that I got written up last year. I like all kinds of genres. I want to do a few more little low-budget movies. I love low-budget movies.

Are there any recent horror movies that you like right now?

I don’t watch movies — it’s the weirdest thing — because I feel like I’m going to work. I see actors looking at their marks. I see them cheating to the camera. I see out -of-focus shit.  I see a lousy shot.