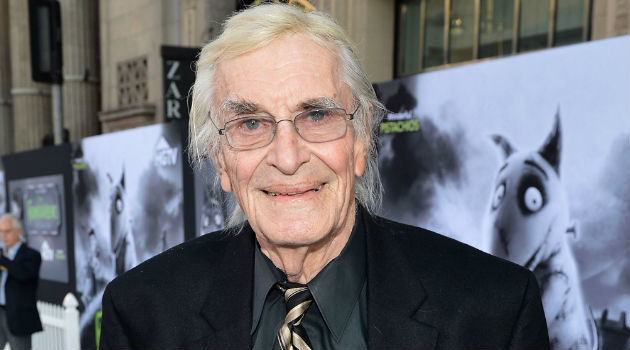 Hollywood veteran Martin Landau earned an Oscar in his first collaboration with Tim Burton, 1994's Ed Wood, and for Burton's latest and most personal picture, Frankenweenie, the filmmaker cast his erstwhile Bela Lugosi as the eccentric but inspirational Mr. Rzykruski — the science teacher who nurtures young Victor Frankenstein's budding talents and encourages him to forge his own path. It's a fitting role for the 84-year-old Landau, who lit up as he discussed Frankenweenie and his longtime parallel career as an acting coach to the likes of Jack Nicholson, Anjelica Huston, and many more Hollywood greats under Lee Strasberg at the Actors Studio.

Tim Burton cast you as Mr. Rzykruski, Victor’s teacher and he’s quite the character: At first imposing and foreboding, he's revealed to be one of Victor's only kindred spirits. What did you make of him at first and how did you find his quirks?
It’s a fun character, and the thing that amazed me is that I saw an arc and if I could play it on camera I’d play it exactly the same. I did [the voice recording] first and the animators animated after. It was just my voice, but Tim sent me pictures of the character and it looked like me years ago, or Vincent Price and me mixed up, a caricature of me with dark hair and such. I saw him as a loving man, but eccentric as hell and passionate! And also, European – but not specifically from a country. It said that; it said it’s a generic accent. It’s not German, it’s not Russian, it’s not Hungarian, but it’s European. [In Mr. Rzykruski’s voice] So I lowered the voice.

The relationship between Victor and Mr. Rzykruski is the best child-adult relationship in the film, and probably the most important one.
He’s the one who inspires the kid, with science and the frog! He’s somewhat outlandish and certainly not a diplomat. If you’re a teacher you don’t call your students’ parents stupid.

It’s a great line, though.
It’s a funny line, and I knew it. But again, the movie is funny, moving, and scary in equal parts and I love that. This is a movie Tim wanted to make three decades ago and couldn’t. He made a short live-action version of it, but the one blessing is that if he had done it then it wouldn’t be in 3-D. But it’s not stuck on 3-D, things coming at you to shock you.

You also happen to be a teacher off-screen, having spent many years with the Actors Studio where so many talents passed through over the decades.
It was a different time. A lot of my contemporaries have passed away, which is sad, but I still run the Actors Studio on the West Coast with Mark Rydell – [Al] Pacino, [Harvey] Keitel and Ellen Burstyn run the New York Actors Studio so we’re in touch with each other all the time. And I work with a lot of young actors and help them.

Why did you first begin teaching?
I started teaching when I was in my 20s because Lee Strasberg asked me to, and he didn’t do that with a lot of people.

Why do you think he did?
At the Actors Studio when I got in, he’d ask for comments and I’d raise my hand and critique the actors succinctly and helpfully, and I think he noticed that. One day he said “I want you to teach – I’ve got a waiting list and I’m going to send some of my people to you.” He sent me off, teaching. Jack Nicholson was my student for three years, and Harry Dean Stanton, Anjelica Huston; a lot of people have studied with me. It’s paying my dues, because as a young actor I benefited from getting in. The year I got into The Actors Studio, Steve McQueen and I were the only two accepted that whole year. Two people, Steve and me. It’s still tough to get in. Lifetime membership.

Who was your favorite student?
That’s hard - they’re all my kids. I’ve got two daughters and it’s impossible for me to say one of them is a favorite.

Fair enough! Was there one actor who surprised you the most over the years?
Nicholson did, but he had some problems. He would kind of surround a moment that he didn’t want to embrace. I found that those things were probably the richest part of his talent, which he was avoiding because it was very hurtful. But I wanted him to know that it wasn’t going to hurt him. You can’t perish because of your own feelings, you have to embrace those things as an actor because it’s part of your palette.

How did you help him?
I had him do a bunch of exercises that would connect his voice, his body, and emotions. A lot of actors lead with their voices and their bodies follow; they’re split, they’re not together. The instrument is not working as a unit. To get them to become good actors… all an audience wants to believe is that what’s going on up there is happening for the first time ever. You don’t want to see the rehearsals, you don’t want to see the work. You want to see two people in conflict or people connecting, but I don’t see a lot of that. There are some movie stars who are considered good actors who put me to sleep. I’m not going to mention their names!

You could be talented but if you don’t use that talent well you’re depriving yourself. Craft is about talented people who shut down easily because they’re vulnerable, they’re hypersensitive, where your talent actually short-circuits you. People who are less vulnerable are usually not that interesting. [Laughs] So when your own talent acts as a deterrent, you’ve got to pay attention to that. How do you open that up? How do you create relaxation when you start getting tense because you’re sensitive to a situation? Tension will shut you down. Your sphincters will all close up. Talented actors have problems; it’s like a violin playing a violinist, where the instrument itself shuts the talent down.

It’s a matter of managing that, then.
Getting the actor to trust his talent and trust his instrument. No one tries to cry. Bad actors try to cry. Good actors try not to cry. How a character hides his feelings tells us who he is. No one shows their feelings except bad actors! No one tries to laugh! If I tell you a racial joke and you laugh, you’re telling me something about yourself – you’re revealing something. A drunk doesn’t try to be drunk; he wants another drink! One of the most studied things is a drunk picking up a full glass of booze [affects drunken mannerism, grabbing an invisible glass]… and bringing it to his mouth. It’s not sloppy. [Slurring] It’s ve-rrry… concentra-aated. Anyway, I never met two people who were alike so I’ve never approach a character as the same character. They’re physiologically different, environmentally different, emotionally different – they’re all different, and that’s what makes it exciting, still, for me. 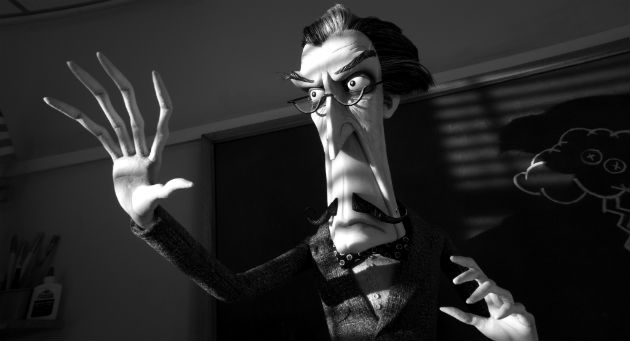 What’s your relationship with Tim like, after years of working together?
Well, we kind of understand each other. He doesn’t have to say a whole lot to me. But I’m rarely directed by anybody. I really haven’t been directed by anybody in 30 years. A good director hires good actors and creates a playground, and you play. You come up with stuff that no one could quite envision. I saw this character not only vocally but physically, behaviorally, and to my pleasure what they came up with was exactly as I would have done it if I’d been acting and it wasn’t animation. That thrilled me, because it was like, wow – they caught it from the voice and it’s exactly as I saw it! Because I saw the arc. There was an arc; he gets fired and gives the kid advice, but it’s sad in a certain sense. He doesn’t restrain himself, this guy.

Rzykruski seems to understand why his progressive thinking doesn’t fly in the suburbs.
He is who he is, and I love that about him. He’s a zealot. He loves science, and the fact that people don’t understand it in the way that they need to upsets him. He sees this kid and he immediately thinks, “This kid’s okay.” He doesn’t know what the kid’s doing, because from the frog’s reaction the kid channels lightning… but Tim loved Frankenstein. He loved Dracula as a kid. This has been festering in him all these years. He never lost this movie, and you think about that – it’s three decades later and this is probably the most Tim Burton film. Edward Scissorhands was as well but he wanted to do that as an animated film and couldn’t, but that was fortuitous in that it introduced him to Johnny Depp, and that became very important to him and to Johnny – and to me too, in a way, because I loved working with Johnny and Tim in Ed Wood.

Ed Wood is fantastic. The relationship between you three on that project really jumps off the screen.
It’s a fun movie. We had a good time. A great time, actually. Johnny and I hit it off, Tim and I hit it off.

You also started out as a cartoonist early in your career. Do you think that had something to do with you and Tim getting on so well?
You kind of see things visually, and maybe that’s a little bit of it. Tim and I draw differently; I have a bit of an Art Deco style.

Do you still draw?
Oh, all the time! I’ve got thousands of what I call doodles, although they’re not doodles. Tim’s seen them. But yes – the visualization is there for me too, in a way. I see the character, and then I work on all of those things into a subjective form. They’re objective, and I make them part of me. We’re all capable of it.

Where do you go from here?
The next thing I know I’m doing is I’m going to London to do more work for Frankenweenie. I’d like this picture to do well. And the BFI is giving me a lifetime achievement award.

How does that feel, to receive an honor like that?
Well I’ve got a lot of those now. I keep saying, “I’m not done!”