Lovely, Still's Martin Landau on Acting Style and the Similarities Between Alfred Hitchcock and Woody Allen 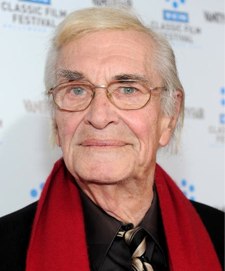 An interview with Martin Landau really shouldn't be called that -- more than just a simple Q&A, it's as though you're sitting in on an Actor's Studio session taught by the 82-year-old actor. Though my talk with Landau this week was pegged to the release of Lovely, Still, a new indie film where he finds late-in-life romance with Ellen Burstyn, it took no time before he began discussing the very nature of acting itself using some of his most famous roles as examples -- including his Oscar-winning turn as Bela Lugosi in Ed Wood and his characters in Alfred Hitchcock's North By Northwest and Woody Allen's Crimes and Misdemeanors. In fact, when it comes to actors, it turns out that Hitchcock and Allen have more in common than you might expect.

Your role in Lovely, Still is such a tricky one in some ways, because he seems like such a placid character initially, and then there's a shift an hour in that really forces you to reevaluate him.

That's what attracted me to it. The interesting thing about both my character and Ellen's is that if you see it a second time, you see a different film. It's not unlike The Sixth Sense, in that you'll see things and hear things that you missed. The trick, really, is not to give any of that away, and Ellen and I were basically acting on two levels at once.

How do you do that without it seeming artificial?

In film, there are always things that could conceivably create artificiality, in any performance. Dialogue is what a character's willing to share and reveal to another character, and the 90% they aren't willing to share is what I do for a living. You know, people don't walk into a cocktail party and say, "Hello everybody. I'm terribly embarrassed, and I don't know anyone in the room." They do everything they can to conquer the embarrassment that is going on.

People do not necessarily reveal what is going on -- only bad actors do. Bad actors try to cry, and good actors try not to. Bad actors try to laugh, and good actors try not to. Only bad actors play drunk -- good actors play drunks playing sober! They don't want everyone in the room to know they're drunk, and if you've ever seen a drunk pick up a glass to his mouth at a bar, it's the most studied, controlled thing you'd ever see, as opposed to the sloppy kinds of drunks you see played everywhere. There's a real amount of bad acting around that is considered good acting, and I see at the Actor's Studio every week stuff that far excels what I see on Broadway or television or film.

You've had a career that spanned many changes in acting style. Do you think there's a sort of acting that's preferred by Hollywood now that's untruthful?

I'm not talking about style, because style is style. Truth affects an audience, and when there's a lie, that's what I'm talking about -- something is not organically correct in the context of what you're seeing. I'm very, very aware of the changes that have occurred over my career in theater, television, and film. If you take Ed Wood, for instance, that's Bela Lugosi, but it's also a Tim Burton movie made fifteen years ago. I couldn't play Bela Lugosi as a kitchen-sink character -- it needed a certain theatricality. It was Lugosi in the sense that I told Tim Burton, "If five minutes in, the audience says, 'Landau's doing a good job,' we don't have a movie. They've got to forget it's me and think that it's Bela Lugosi." By the same token, it's Bela Lugosi theatricalized, extended, larger than he was. So it's not about style, it's about performance succeeding so that the audience is affected in the way you want them to be affected.

Crimes and Misdemeanors, I told Woody before we started, "If you see anything theatrical, stop me." Because we had that conversation, he never had to. I wanted that character to be every man, I wanted the audience to feel that there was not an actor playing the role. Woody invited me to dailies, but I didn't go, because I didn't want to see it from the outside. I can see a comedy that's released right now and laugh if it's funny, and if the audience laughs, it's accomplishing what it set out to do -- although there's a lot of gar-baaage out there, pardon my French. Some stuff would only make a vampire laugh.