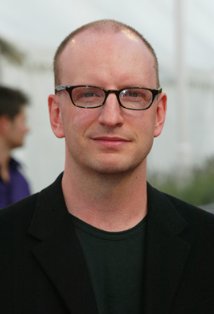 The Magic Mike director gave insight into his future endeavors once his hard stop to movie making begins in six months. He told Reuters that a book and even television work may occupy his interests, following in the footsteps of a number of filmmakers who are crossing over to the small screen in the past several years.

"I've been planning this for five years ... I gave myself an out date and I'm right on schedule. I turn into a pumpkin in January," Steven Soderbergh told Reuters. He also noted that he's over making what he dubbed as "important movies," adding that Che satisfied that desire. Following his latest, Soderbergh will finish off the thriller The Bitter Pill starring Channing Tatum, who also stars in Magic as well as Rooney Mara. And he also has the Liberace biopic Behind the Candelabra with Michael Douglas and Matt Damon shooting this summer.

Candelabra may be a window, in fact, into the Oscar winning director's future since it's an HBO production. "After I take my self-imposed sabbatical, if I'm going to come back and do something, I think it's more likely that it would be on television than it would be a movie," he said."

What do you think of Soderbergh's move to TV?