What Will Smith Learned From Star Wars, Rap Music, and Watching Dallas

This week marks the big screen return of Will Smith — Hollywood’s most bankable star — after a four year absence from acting, during which time the erstwhile Fresh Prince refocused his personal pursuit of happiness: namely, producing the burgeoning entertainment careers of kids Jaden and Willow Smith, while fine-tuning his own career. So where do you go when you’re already on top — or were, a few films ago? Back to the blockbuster well, if you’re Smith, whose Men in Black 3 headlines the latest step in a lifetime career plan that, he describes, began when he was just a kid himself.

“I like big movies,” admitted Smith to journalists at the Men in Black 3 press day in Los Angeles, “and the adjustment I’m making in my career right now is the clarity of what we’re saying with the movie. There has to be an idea, there has to be some message or some statement, for me.”

Even, say, in a threequel about aliens wreaking havoc on earth? Despite widespread reports of the chaotic Men in Black 3 production — filming without a finished script, for starters — Smith insists these essential messages are there to be found as viewers watch his Agent J traipse back in time to the 1960s to save the younger version of his partner, Agent K (played by Josh Brolin, channeling Tommy Lee Jones with uncanny aplomb).

“With Men in Black 3 we connected to the destructive nature of secrets,” he explained. “That idea whether you get that or not, when you look at it or think about it, that’s what we’re displaying, and how a relationship can get repaired and go to another level through the exposure of a secret.”

At the age of 43, the Oscar- and Golden Globe-nominated Smith is almost twice as old as he was when he first rose to popularity on his TV show The Fresh Prince of Bel-Air. And though he’s still got those baby faced looks and an effervescent energy about him, he espouses the kind of philosophical musings of someone who’s managed to avoid the pitfalls of fame through sheer determination.

“I control every interaction with every human being that I’m with,” he proclaimed. “That a person isn’t just an asshole, or a person isn’t crazy; if I’m aware, I can actually manage any situation with 98 percent of the people on Earth.”

Of course, there’s the odd fan who’ll go in for one too many kisses on the red carpet — like the Ukrainian journalist at the center of last week’s widely reported Men in Black 3 premiere incident (which occurred after this interview). “There are some lunatics that you just can’t do nothing with them,” Smith said with a smile, “but for the most part you play a part in every aspect of your life going the way you want, or not going the way that you want.” 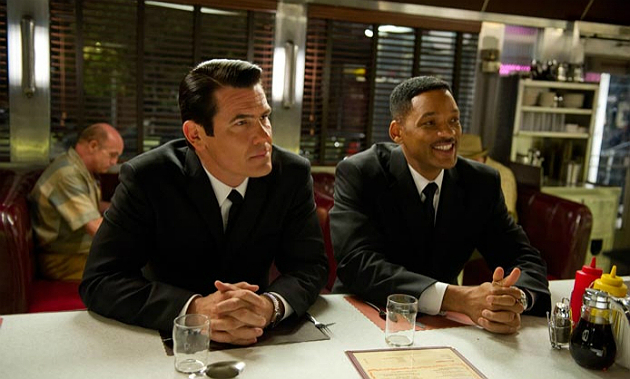 That self-determining secret to success is something that Smith also says he and wife Jada Pinkett-Smith try to impart to their children, Willow and Jaden. “The idea of failure is a label,” said Smith. “It has no bearing on what actually happened. What actually happened can turn out to be the best thing that ever happened to you if you decide that it’s the best thing that ever happened to you. So for me, the big thing with my kids is you have to control how you label things, because they’re going to become what you say it is. It’s very important to me that they understand the power they have to create the lives that they want.”

“Willow, for example — we were getting flack for letting Willow cut her hair," he said. "If I teach her that I’m in charge of whether or not she can touch her hair, she’s going to replace me with some other man when she goes out in the world. Now, she can’t cut my hair! [Laughs] But that’s her hair. To me it’s more about lumping the responsibility on them for their lives, as much weight as they can hold without breaking… that’s what we try to give them until they can hold the full weight of their lives.”

[To son Jaden, with whom Smith co-starred in The Pursuit of Happyness and appears in M. Night Shyamalan’s After Earth: “I tell him all the time, ‘Son, I’m going to teach you everything that I know — and if you work hard, you can be the second biggest movie star in the world.’”]

This brings Smith full circle, in a way, with the roots of his own success, which he credits to soaking up the pop cultural trifecta of Star Wars, hip-hop, and TV’s Dallas as a child.

“It just felt like somehow the limits got knocked off after I saw [Star Wars],” Smith recalled. He was 10 years-old when he first saw the sci-fi classic. “It coincided right with the time that ‘Rapper’s Delight’ came out, so it was the introduction to rap music and Star Wars in the same year. Rap music was something that only people in New York did, and it was separate and you couldn’t get it, but part of the experience of Star Wars made me think, ‘Oh, I can rap.’ My mind got expanded in a way that’s really hard to explain.”

Add to that the sprawling estate that the Ewing family lived on in Dallas and Smith’s lifelong inspiration was set. “Grown people lived on the property and came to breakfast and everybody worked in the family business, and I was like, ‘I want that!’” he exclaimed. “So I’ve been like a mad scientist trying to build Dallas through Star Wars and rap music.”

Men in Black 3 is in theaters Friday.