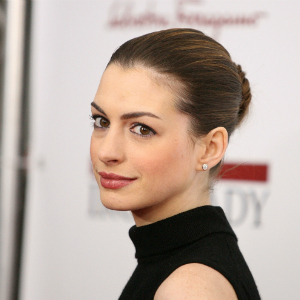 A trailer for Tom Hooper's upcoming Les Misérables film leaked onto the interwebs today, revealing looks at Hugh Jackman in action in the musical adaptation. But nevermind the handsome, jaunty period stylings of 19th century France in turmoil as envisioned by Hooper; get an earful of Anne Hathaway's warbly voice singing a tearful rendition of "I Dreamed a Dream"... and sound off on her Fantine. Are you excited or worried, theater nerds?

To be completely fair, this is the worst-quality video you could imagine for a trailer, which appears to have been filmed off of a computer. Even so, the footage looks great to me — sweeping shots, dynamic camera moves, Jackman's Jean Valjean disappearing into the shadows. What's most concerning is also the most important element of the film: The singing.

According to reports from CinemaCon (where similar footage from the film was screened, including portions of Hathaway's "I Dreamed a Dream" number), Hooper's plan was to film most of the musical numbers with his cast singing live, which might explain why Hathaway's voice sounds a bit unpolished. Or maybe that was intentional. Or maybe it's just me.

[UPDATE 5/30/12: After the trailer leak was removed at the studio's request, the official version was made available today.]

Perez Hilton first posted the video today, along with fawning words for Hathaway's performance: "If we had any doubts about this, they are GONE now!!!" Over at The Atlantic Wire, Richard Lawson called it "unsettling," a reaction more in line with my own.

My theater nerd pal (and Popular Mechanics editor) Erin McCarthy immediately sent over this video of stage goddess Lea Salonga singing the same number with a much stronger, yet still deeply emotional voice, but perhaps the comparison — or any comparisons, as the entire film's cast is bound to suffer scrutiny — is unfair. Hathaway is a strong singer in her own right (see: The Oscars) but she's probably deep in character as the desperate Fantine and her vocal interpretation may reflect that. Was it wise to film the largely sung-through story with live singing? That's the biggest question so far as we await better looks at Hooper's Les Mis, due in theaters December 14.