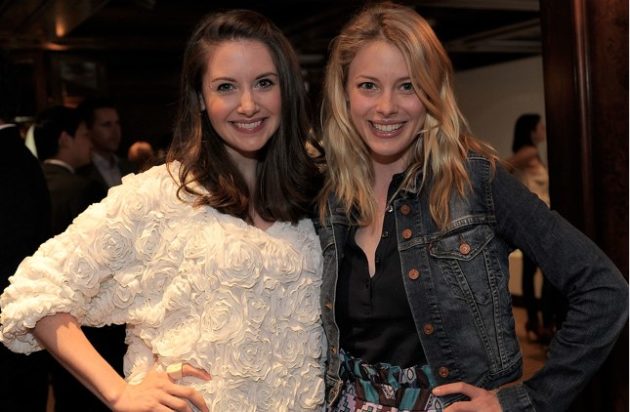 To 'make it' in Hollywood, young actors used to kick-start their careers in television, sharpening their skills and earning notoriety (and maybe an Emmy or two) before frolicking in the greener grass of feature films. Today, with the growing budgets, themes, and imaginations of series TV, episodes have almost become mini movies, inspiring a newer generation of stars to not only gravitate toward television, but maybe even stay there — even as their careers take off. Alison Brie and Gillian Jacobs epitomize this trend, two actresses who earned their comedy stripes on NBC's Community, a place where dreamatoriums come to life and paintball wars are aplenty. Meanwhile, the pair is also on the Tribeca Film Festival circuit this year — Jacobs with the dark indie comedy Revenge for Jolly! and Brie with tonight's Tribeca opener, the buzzy hit-in-waiting The Five-Year Engagement.

While both actresses studied theater in college — Jacobs at Juilliard and Brie at CalArts — they began their respective careers on opposite ends of the spectrum. Jacobs spent years working on small indie films and TV roles, while Brie supported herself doing regional theater in Ventura County, never thinking twice about TV. "In my sort of young, idealistic mind, I was just like, 'Well, it's either theater or film for me, and that will be that!'" Brie explained. That changed after booking a surprising first TV role on Disney's Hannah Montana, sparking an epiphany for Brie. "I realized that I love acting, no matter what I'm doing," she said. "And it was a great time for good news, because I got Mad Men right after that, and that led to Community. I couldn't be happier."

Like her Community co-star Joel McHale, who also hosts E!'s weekly celeb-culture rundown The Soup, Brie still juggles two roles today: uppity, picture-perfect housewife Trudy Campbell on AMC's Mad Men, and doe-eyed schoolgirl Annie Edison on Community. "I got lucky, and it's amazing to be able to work on both shows and have them be so different in tone," she said. "Working on one of the best dramas and one of the best comedies on TV has certainly opened a lot of doors for me in terms of being able to show some range and not get totally boxed into one thing [for films]," she added. "I went to college and got my degree in acting, but because it was all theater, I really consider my first couple years on Mad Men as amazing training for working in television and for acting on-camera."

For Jacobs, Community allowed her to showcase a side of her that no one had seen before. "I had never done comedy before," she told Movieline, "and I was desperate to break into it because it gets really tiring when you're always playing prostitutes and strippers and rape victims." And like Brie, Jacobs doesn't take the opportunity or the experience for granted. "I joined a new club in the world of comedy," she said. "And the fact that [Community] has turned into this sort of thing totally unto itself and unlike any other show on TV has just been an added bonus of the whole experience."

Yet where contemporaries (and fellow TFF '12 stars) like Adam Brody and Olivia Wilde only a few years ago aggressively sprung from a cult darling like The O.C. into movie careers of mixed results, neither Brie nor Jacobs feels comfortable choosing between television and film. "I feel like the kind of role that I'm getting to play on TV, I don't know how often those come along in films," Jacobs said. "I feel like I've been very fortunate in that I feel constantly creatively challenged and pushed on my show, and I don't know if that would be the case if I were asked to play the same variation of one character in movies. No actor wants to choose — they just want all of the options available to them all the time; we tend to be pretty greedy."

Meanwhile, Brie sounded even more resolute about the small(er) screen.

"While I love film and want to continue to pursue it 100 percent, my home is TV," she said. "My mom and dad are Mad Men and Community, and it honestly feels like working on mini-movies every day. "The original transition was quite easy, because the caliber of writing, directing, and acting and the nuance of the performances on Mad Men are like shooting a dramatic film. I can say the same thing about Community, with our amazing writers and the caliber of acting that we're working with in a comedic respect."

Moreover, the unique qualities and style of the single-camera comedy have given both a leg up in the film world. "I felt like I've been doing three years of comedy boot camp, and when the opportunity came to do The Five-Year Engagement, I felt very prepared and confident in my comedic skills because of the training that I got on Community," Brie told Movieline. "I also just worked on a film called Get a Job, and my character is odd — sort of inappropriately sexual and just weird — so Dylan Kidd, the director, gave me a lot of freedom to have fun and play around and try to say the weirdest things that I could come up with. I know that he is a fan of Community as well, so I think that it's the work that I've done prior on the show that gave him the confidence to trust me with that kind of improvisation and input."

Although there is some improvisation on Community, Brie noted that "you don't have all the time in the world to improv and come up with ideas [on TV]; you're on a much tighter schedule in terms of shooting episodes in five days or seven days." When it comes to film, especially in Five-Year, there was a bit more leeway. "Because we have a lot of scenes where it's like engagement party speeches or shower speeches — a lot of speeches going on! — you have the luxury of extra time to collaborate," she said. "At one point [director Nicholas] Stoller even e-mailed us prior to the scene and was like, 'Hey, everyone just think of funny, inappropriate speeches; just think of weird stuff to do!' because we had all day to play with it."

As Britta Perry on Community, the closest that Jacobs has been to putting on the red light was belting "Roxanne" in a recent episode. However, her role in Revenge for Jolly! (premiering Saturday at Tribeca) has her playing — drum roll, please — yet another prostitute.

"Filming that movie was a total return to form for me — shooting in a crappy hotel in Nyack, N.Y., dressed as a prostitute; it was down and dirty filmmaking at its finest," she said with a laugh. "And basically, the two leads are going on a killing spree, so I think there's a high likelihood that I'm going to get shot in that film, or die in some way!" Also on the way this summer is Seeking a Friend for the End of the World, led by Steve Carell and Keira Knightley. Jacobs described her role as "small and silly, playing a waitress high on ecstasy alongside T.J. Miller," while also noting that "the nice thing so far is that I've been sort of able to balance between a bunch of different worlds: bigger movies, TV, and still smaller indie films as well."

As for the future of TV and movies, and which is inevitably the dominant medium? "It's kind of like what I think Joel [McHale] has said before: 'It's the best of times and it's the worst of times of TV,'" Brie said. "There's the lowest of the low in terms of reality TV, and then there's also kind of some of the best of the best on television shows like Mad Men, Community, Breaking Bad and Girls — it feels like you're watching movies!"

Alyse Whitney is a New York-based writer, currently with TVLine.com. Her work has been featured in Bon Appétit and a handful of other publications, and you can also find her on Twitter.