Bully Will Be Released Unrated, But Will Theaters Let Kids In? 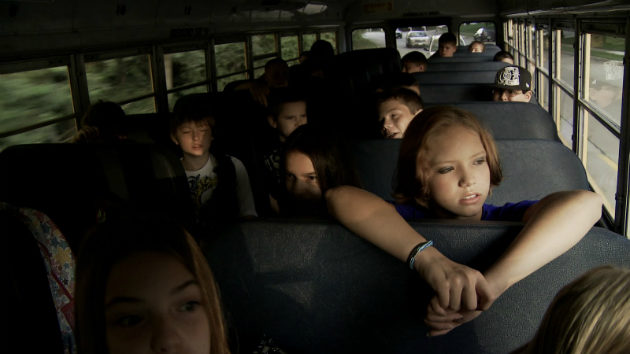 With the MPAA ruling in favor of upholding Bully's R-rating, the Weinstein Co. has announced that they'll release the documentary as planned on March 30 -- in its full, explicit language-laden unrated cut. The question is, will theaters let minors see it? "I know the kids will come, so it’s up to the theaters to let them in,” said director Lee Hirsch in a press release, with TWC marketing head Stephen Bruno adding pressure to the theaters to "step up and do what's right."

It's the latest moral prompt about movies, how we watch them, and whether or not we should let our kids watch them stemming from the tightly executed campaign around the doc, which has become a rallying missive against the widespread epidemic of youth bullying. So fervent is support for Bully that it's no longer parents or the MPAA who have to get out of the way and let their kids watch it, but now the theater owners who might otherwise bar kids from attending showings of the unrated film.

All of which actually raises a good question: Should theater owners and operators step in to help or hinder young audiences from seeing unrated films otherwise deemed rated-R by the MPAA? Perhaps on a case-by-case basis, as opposed to unrated films that contain sexually graphic or violent content, and primarily for younger moviegoers; in this case, Bully's awareness-raising merits seem to outweigh the fact that audiences will hear the f-word uttered a number of times onscreen. When I was a kid, watching R-rated movies on cable TV wasn't just educational, it was formative. Why not let kids hear a few "fucks" with their civics lessons?

In contrast to most theaters' rules when it comes to R-rated films (No one under 17 admitted without accompanying guardian) or NC-17 films (No one under 17 admitted, period), the unrated label is more ambiguously defined in practice. With a film like Bully -- and, more effectively, given the media PR blitz it has going -- I can't imagine any chain operator ticket-taker turning away a group of 12-year-olds that come to watch the film.

On the other hand: What if those 12-year-olds then sneak into Project X??

March 26, 2012 – New York, NY – After a recent plea to the MPAA by BULLY teen Alex Libby and The Weinstein Company (TWC) Co-Chairman Harvey Weinstein failed – by one vote – to get the film its deserved PG-13 rating, TWC is choosing to move forward with releasing the film unrated by the MPAA on March 30.

Furthering proof that the R rating for some language is inappropriate for a film that’s meant to educate and help parents, teachers, school officials and children with what’s become an epidemic in schools around the country, the fight against the rating continues on. The outpour of support by politicians, schools, parents, celebrities and activists for the film’s mission to be seen by those it was made for – children – has been overwhelming. Nearly half a million people have signed Michigan high school student and former bullying victim Katy Butler’s petition on Change.org to urge the MPAA to lower the rating.

Said BULLY Director Lee Hirsch, “The small amount of language in the film that’s responsible for the R rating is there because it’s real. It’s what the children who are victims of bullying face on most days. All of our supporters see that, and we’re grateful for the support we’ve received across the board. I know the kids will come, so it’s up to the theaters to let them in.”

“The kids and families in this film are true heroes, and we believe theater owners everywhere will step up and do what’s right for the benefit of all of the children out there who have been bullied or may have otherwise become bullies themselves. We’re working to do everything we can to make this film available to as many parents, teachers and students across the country,” said TWC President of Marketing Stephen Bruno.

For parents or teachers who are looking for more information or who may have concerns about showing children a movie unrated by the MPAA, please read Common Sense Media's rating details of the film here: http://www.commonsensemedia.org/movie-reviews/bully.

“While it’s often heartbreaking and deals with tough issues like suicide, the movie addresses bullying in a frank and relatable way that is age appropriate for teens and relevant for middle schoolers if an adult is present to guide the discussion,” said James P. Steyer, Founder and CEO, Common Sense Media. “The MPAA’s ratings system is inadequate when it comes looking at a movie’s content through the lens of its larger thematic issues. Common Sense Media provides alternative ratings for parents who are looking for more guidance and context than the MPAA provides."

BULLY will be released in theaters on Friday, March 30th in New York at the Angelika Film Center and AMC Lincoln Square and in Los Angeles at The Landmark, ArcLight Hollywood and AMC Century City.

BULLY is a beautifully cinematic, character-driven documentary. At its heart are those with huge stakes in this issue whose stories each represent a different facet of America’s bullying crisis. Filmed over the course of the 2009/2010 school year, BULLY opens a window onto the pained and often endangered lives of bullied kids, revealing a problem that transcends geographic, racial, ethnic and economic borders. It documents the responses of teachers and administrators to aggressive behaviors that defy “kids will be kids” clichés, and it captures a growing movement among parents and youths to change how bullying is handled in schools, in communities and in society as a whole.