Movieline is pleased to present the first installment of One-Sheet Wonder, a new column on the best, worst, weirdest and other milestones of contemporary movie-poster art. — Ed.

We’re a little more than two months away from the debut of the Cannes Film Festival opener Moonrise Kingdom, Wes Anderson’s first live-action film in five years, and the promo push is on. The first trailer hit a while back, and the first poster was revealed last week. And while the trailer is an exhilarating promo clip, on first glance it’s easy to dismiss the poster. It feels minimal and rather meh overall, like a starving-artist, Bob Ross knock-off masquerading as a one-sheet ("Look at that happy little waterfall…"). 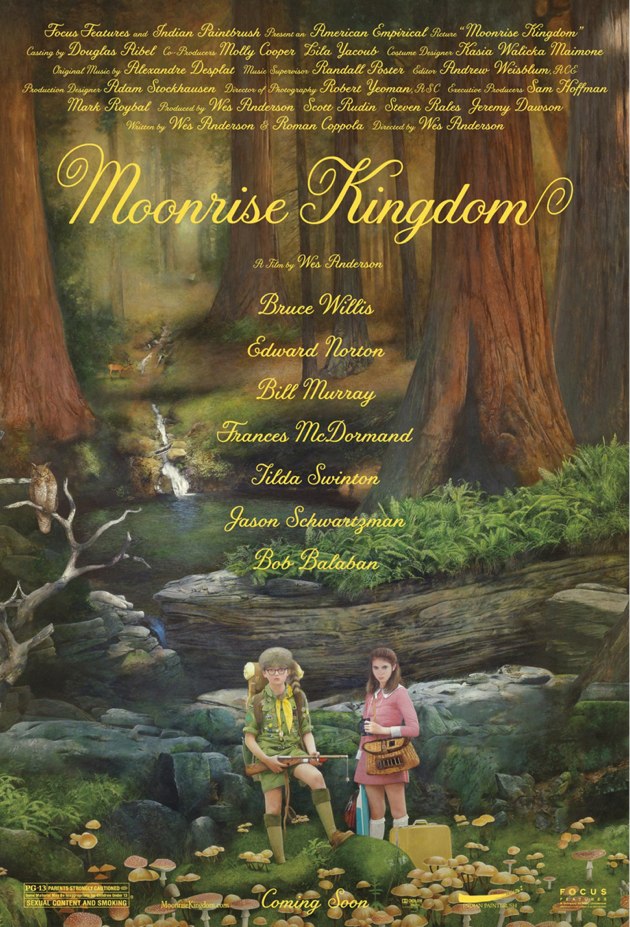 But since The Life Aquatic, posters for Anderson’s films have trended to a less-is-more approach. The Darjeeling Limited, for example, focused on, essentially, a snapshot of the three leads in a moment of quiet introspection, whereas Rushmore is all about bombastic (Photoshopped) revolution. The reason for this change is Anderson’s movies, increasingly, have been sold to his fans rather than audiences at large. Not surprisingly, this began with The Royal Tenenbaums as Anderson established his unique visual style. Since then, his posters have become more conceptual and more for his acolytes. (Fantastic Mr. Fox — aimed squarely at kids with its kooky, busy everything-but-whackbat design — is the exception.)

Moonrise Kingdom is the zenith (so far) of this marketing strategy. It’s not very active, but it picks up many of Anderson’s trademarks. Sam and Suzy, the film’s leads, are in full-on Anderson mode — Sam carries a popgun and pulls his best young Bud Cort impression while Suzy is loaded down with a travel record player and Margot Tenenbaum-esque style/ennui — and their straight-on confrontation of the viewer is an Anderson trademark. 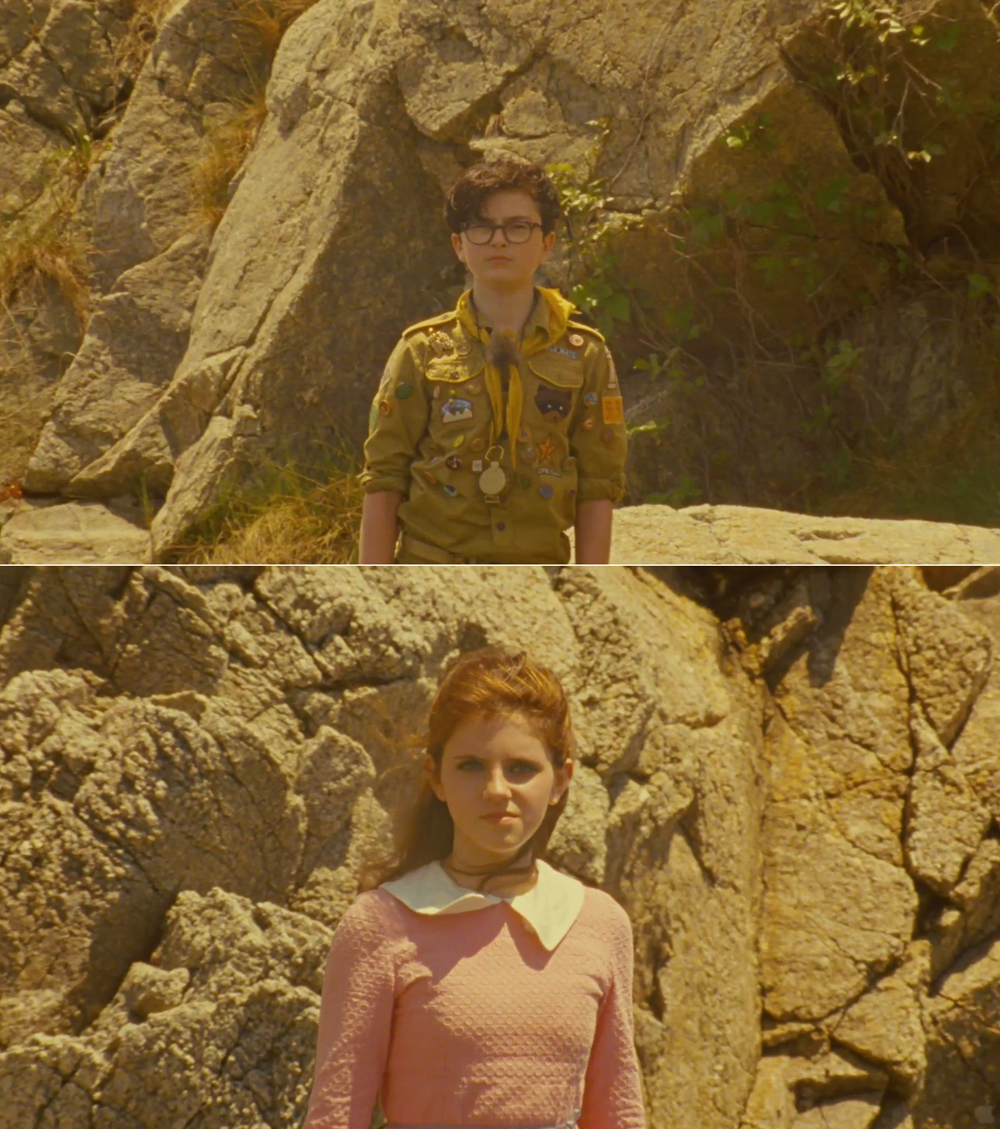 And while the foreground is fairly flat, there’s a world of depth and texture in the background, a staple of Anderson’s cinematography. 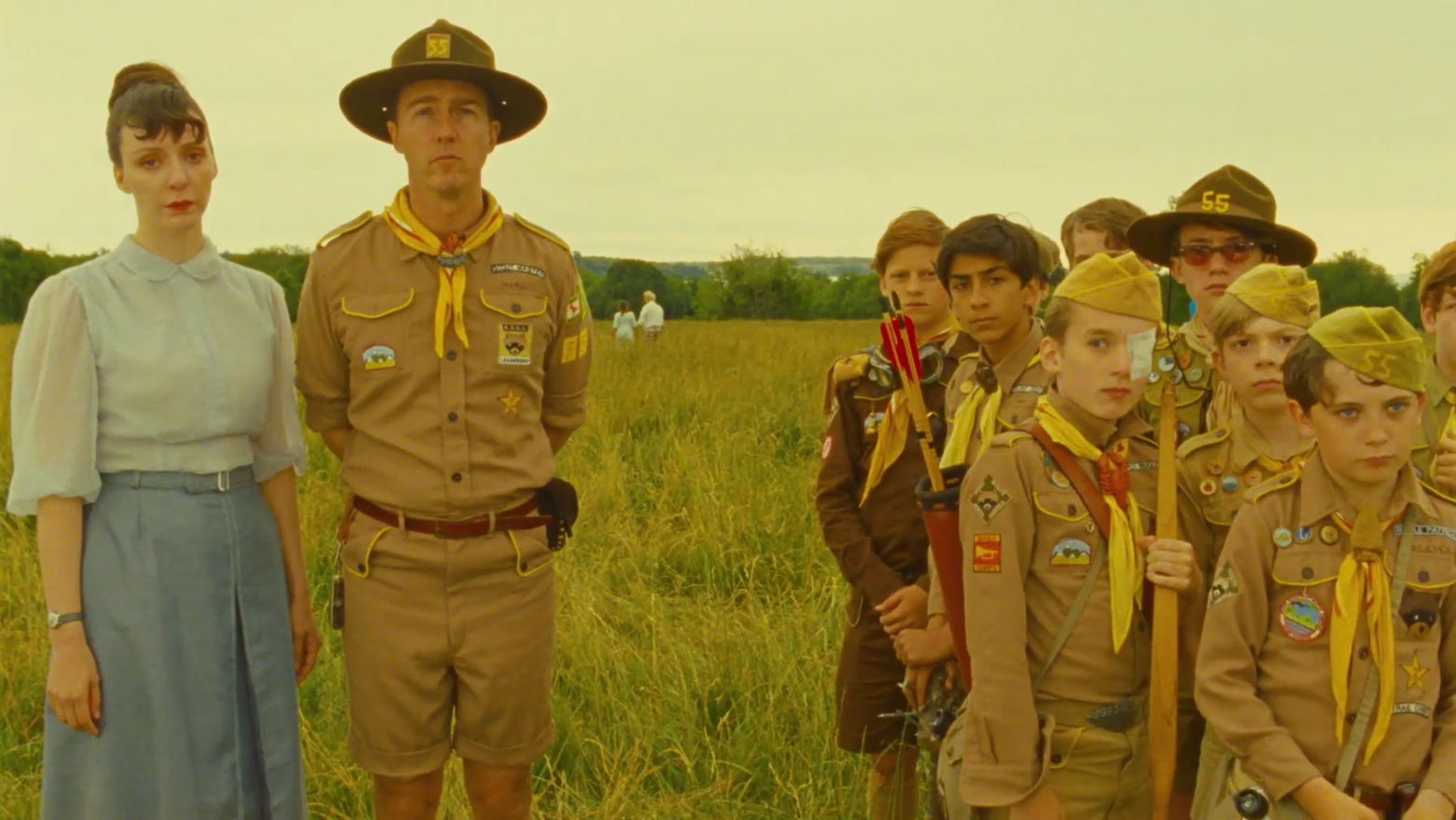 The poster also continues the practice (begun on Darjeeling) of placing the credit block at the top of the poster, above the title, drawing our eye (and consideration) to an image rather than text. When you factor in the font-type similarities to the invitation script at the beginning of Tenenbaums, it could be that Anderson is finally establishing a design continuum for his ad art to complement the one in his films.

Visually dazzling? Maybe not to the motion-poster (blech) crowd, but for Anderson devotees it’s exciting. It picks up on his filmmaking sensibilities like no poster before it — and it aesthetically establishes Moonrise Kingdom’s place in Anderson’s legacy vis-à-vis the Criterion Collection. Criterion’s releases of Bottle Rocket, Rushmore, Tenenbaums, Aquatic and Darjeeling are whimsical, but they eschew studio publicity shots for a handcrafted, Andersonian representation of a scene or the essence of the film. (Criterion’s Tenenbaums and Aquatic releases had studio art slipcovers over the hand-drawn ones because they were the only official releases of the films, Buena Vista didn’t likely want to scare off the normals with childlike illustrations.) Moonrise Kingdom is the first theatrical poster for an Anderson film to similarly disregard poorly edited stills (a la Rushmore or Bottle Rocket) for a painted distillation of what we can imply is the film’s spirit.

Ultimately, it might seem this poster is selling Anderson’s sensibility more than the film, but that’s because they’re one and the same. The poster says, “Wes Anderson has a new movie coming out,” and that will either sell people on it or drive them away. Such is the plight of an auteur. Focus Features understands the audience for this film — the cinephile who genuflects at the Wes Anderson altar — and the studio absolutely reaches it with this poster. It might not be the flashiest of Anderson’s ads to date, but it’s certainly the most authentic.

Dante A. Ciampaglia is a writer, editor and photographer in New York. You can find him on Twitter, Tumblr, and, occasionally, his blog.