The Future of IMAX is... Lasers! 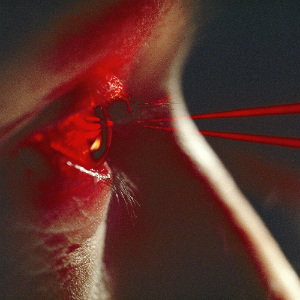 By the year 2013, IMAX theaters and Kodak will bring digital theatrical projection to the next level with a single, exciting, futuristic-sounding concept: LASERS! The companies announced their partnership today in a statement promising advances in quality projection in large-scale IMAX and dome theaters in the coming years to benefit moviegoers, theaters, and investors. Win-win-win?

"This Kodak intellectual property is truly cutting edge," said IMAX CEO Richard L. Gelfond in a press release today, "and will be used by IMAX's esteemed Technology Group to enhance the cinematic experience for consumers, enable the application of digital technology in our larger and institutional theatres, and make being in business with IMAX even easier and more profitable."

IMAX is exclusively licensing over 50 Kodak laser and digital projection-related patents and technologies that promise to enhance the visual experience and light quality of the IMAX experience, as well as make content distribution within the IMAX network easier.

"Because this technology produces the deepest blacks, and the brightest 3D of any system demonstrated to date," said Kim Snyder of Eastman Kodak Company, "it will truly make the movies more exciting for consumers, and that creates a strong value proposition for the studios and exhibitors as well."

Meanwhile, Kodak has in recent years been developing laser projection technology, which previously fell under separate laser-specific regulations. In February, the company got the go-ahead from the FDA to bring their technology to cinema theaters (vs. specialized laser shows, etc.). According to Kodak's website, the features of their Laser Projection Technology include combined 2-D and 3-D projection," 3-D images "twice as bright" as those used in standard industry practice, and 2K resolution scalable to 4K. In a statement last spring, Kodak explained the initiative:

Typically, digital projection systems using high power lasers fall under the definition of a "demonstration laser" and must follow existing regulations for conventional laser projectors, such as those used in laser light show displays. Kodak has been working in conjunction with laser safety consultants and the FDA to address potential safety issues.

Could lasers be the key to the future of theatrical moviegoing? Will it make the sucky peripheral IMAX seats you get when you arrive late suck any less? Would Jim Cameron approve? Stay tuned...