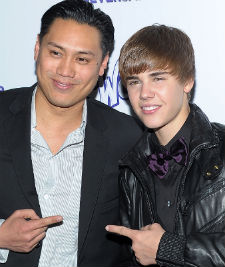 If you thought you'd seen the last of pop phenom Justin Bieber (well, for a while) after his rocku-biopic Never Say Never opened two weeks ago, his Rolling Stone interview hit, he died in a hail of gunfire on CSI, and he cut that magical hair, think again: In an unprecedented move by Paramount and director Jon M. Chu, a new cut of the film is being re-released to theaters this Friday for a limited one-week run. So why the Bieber Redux? And why are non-Beliebers buzzing about the impact Never Say Never: The Director's Fan Cut could have on the future of filmmaking?

Hitting North American theaters this Friday for one glorious week, Never Say Never: The Director's Fan Cut excises select footage and adds about 40 minutes of unseen scenes per fan request. Beliebers will undoubtedly benefit most from the special cut (New songs! New Biebs footage! More fan videos!), but the re-edit has greater implications for a film industry still hesitant to embrace all that digital movie-making has to offer: It suggests that director's cuts and re-releases are no longer exclusive to the jurisdiction of home video, but instead can (and, if Chu has his way, will) begin bleeding into the theatrical space, blurring the lines between traditional windows of consumption.

Read on for the full Movieline Interview with Jon M. Chu, recent Emmy recipient for his work on the digitally-released online dance series The LXD, about what's been added to Never Say Never, what the recut means for the future of digital filmmaking, when he predicts the death of film will occur (hint: Chu gives celluloid more time than Roger Deakins did, but just barely), and if Bieber deserved the media shellacking he got for his recent pro-life comments.

[Laughs] That was awesome! First of all, The Lion King is one of my favorite movies of all time. And the fact that Mufasa was singing it was like a dream come true. My worlds, colliding!

So, you went and re-cut Never Say Never. Were you keeping this news under your hat the last time we spoke?

We knew there was a possibility but we didn't know it was actually going to happen. There was a bunch of stuff we wanted to put in the movie that we had to cut out; it's already long as it is, and we wanted to keep it short and sweet. But ultimately it came down to, we can do this -- we have 90 percent digital screens, we can actually do it the way we release things on the web, let's do it! We finished on Sunday.

When did you start re-editing?

We always had pieces that we'd cut out of the movie but we didn't actually start putting them back into the movie until maybe a week and a half before the movie came out.

You asked the Bieber fans what they wanted to see and used their responses to make your director's cut, but were you mindful at all of what critics had said about Never Say Never?

A little bit. [Laughs] I knew when critics said certain things, I went oh, we have that. We just didn't put them in because they didn't serve the essential part of our story. But now we can delve into it a little bit more -- Justin's father's side of the family, his brother and sister, which we really don't tap into in the movie. And a lot of that is because they weren't at Madison Square Garden, so there was no conclusion to their story, it was just hanging there. But now we're like, let's put it in -- it can just hang there and it's okay because this is the fan cut of the movie. So we do things like that. We added in songs when we felt [initially] that we had too many songs before in other versions. This time we can put those in. There are new videos that fans sent in, of themselves lip-syncing, which were always a part of the movie but just felt too long and we cut that at some point, but now we can put that in. We have hundreds more fans in it, which is really cool. And we got to shoot the premiere and integrated that into the movie.

Inside the theater, some fans waving glowsticks, some fans coming out, going in, waiting in line... all that kind of stuff. We wanted to show what it meant to go see Never Say Never that first weekend. We didn't include many [celebrities]; we wanted as much Justin as we could get in this movie.

I'd imagine plenty of fans would want to see Selena Gomez arrive at the premiere wearing Bieber purple...

She was wearing that Bieber purple! She looked great that night. I was impressed.

To be re-cutting and re-releasing the entire film so soon after release -- do you have the sense that this is a pivotal moment that could change the way films are made and consumed?

I totally think so. It's weird because movie-making and especially movie theaters have always been so old-school, and it wasn't until 3-D that a lot of them were forced to have digital projectors and even digital distribution. This process, changing it to digital, changes everything. We've seen it in amateur photography, professional photography, music, in every walk of life, but now it's the movies' turn. And everyone's been really scared to play around with it. Paramount, to their credit, which was sort of a rebel studio back in the Robert Evans days -- to say to them now, what if we changed it up? What if we organically changed it to be what people wanted more of, and we didn't have to worry about the movie being too long and all this stuff. They were like, we have the ability; let's just try it! If there's any movie to try it on, this would be it.