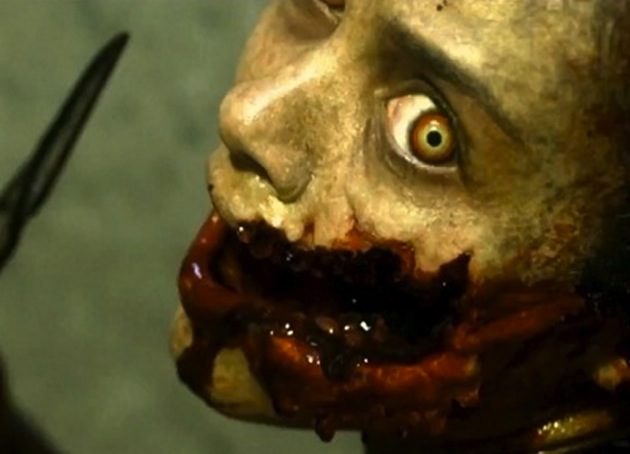 The rare remake that likely will be enjoyed most by diehard fans of its predecessor, Evil Dead often comes off as the cinematic equivalent of a cover-band concert tribute to a supergroup’s greatest hits — albeit with a lot more gore. First-time feature helmer Fede Alvarez’s blood-soaked reprise of Sam Raimi’s franchise-spawning low-budget shocker, The Evil Dead, boasts far better production values than the penny-pinching 1981 original and conceivably could delight genre fans who have never seen the first version or its previous remakes/sequels. But it’s bound to play best with those who catch Alvarez’s many wink-wink allusions to Raimi’s pic.

Working from a script he co-wrote with Rodo Sayagues, Alvarez briskly sets up his recycling of Raimi’s horror premise — five friends visit a secluded cabin in the woods where all hell breaks loose — with an aptly portentous prologue and backstory-heavy opening scenes. But Alvarez goes Raimi one better, by actually offering a logical reason why the characters don’t immediately vamoose once supernatural manifestations begin.

Eric (Lou Taylor Pucci), the academically inclined member of the group, finds in the cabin a mysterious Book of the Dead filled with horrific illustrations, mysterious symbols and ample warnings not to read aloud anything that appears in its ancient pages. Unfortunately, Eric does not heed those admonitions, awakening a familiar demon for a new generation of young victims. Mia is the first to be infected by the monstrously malignant and singularly foul-mouthed bogeyman, but it doesn’t stop there, inspiring her cabin mates to damage themselves and each other in creatively gory ways.

Alvarez repeatedly references plot elements and specific shots from Raimi’s original pic. Taking his cue from the original, he makes especially effective use of lenser Aaron Morton’s swooping, swirling camera movements, which suggest the POV of a rampaging poltergeist. But Alvarez’s tone is completely different, as the helmer rarely attempts to emulate the self-mocking, over-the-top campiness that distinguished the original Evil Dead from so many other cheapie creepies of the 1980s.

Actor Bruce Campbell (who’s onboard here as a producer) more or less established himself as a cult figure back in the day with his inspired overplaying of Ash, the astonishingly resilient protagonist of Raimi’s original. In Alvarez’s version, Fernandez’s David serves the equivalent role,  but he’s deadly serious.

Indeed, the only character who even gets to crack a joke is Pucci’s Eric. Asked if he’s certain that actions described in the Book of the Dead will rid them of the troublesome spirit, the frantic fellow replies, “Am I sure? Of course not! It’s not a science book!”

Levy is believably beastly as the possessed Mia, and manages the heavy lifting when her character must handle some last-act heroics. Other members of the cast do what they can with thinly written parts. For instance, it’s not really Elizabeth Blackmore’s fault that her role as David’s g.f. is so ill-defined and unimportant that some may forget she’s in the pic until she starts to make lethal use of a nail gun.

The bloody mayhem is so graphic and frequent throughout Evil Dead, one cannot help suspecting that alternate takes had to be shot to ensure an R rating. The emphasis on dismemberment and disfigurement should make this must-see entertainment for gorehounds, but could literally scare off auds accustomed to less explicit, PG-13 fare.

Ultimately, the new Evil Dead will rely heavily on existing fans of this unlikely franchise to make a killing in theatrical and homevid release. Those who get the inside jokes should be easy to spot: They’ll be the ones laughing when the onscreen carnage erupts most furiously.