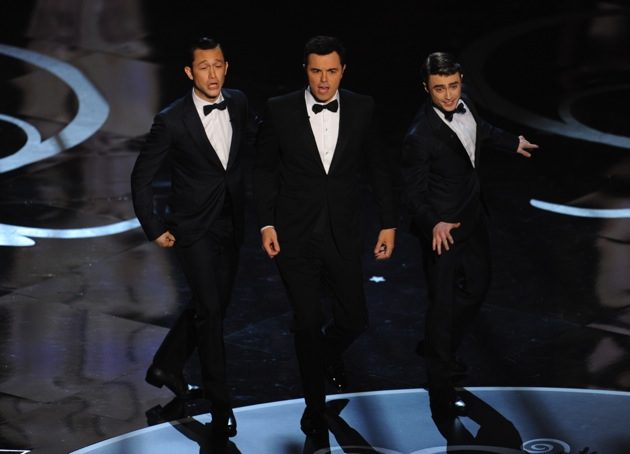 To quote Patton Oswalt from his great KFC Famous Bowls routine, “America has spoken,” and for Oscar pundits bemoaning Lincoln’s loss to Argo, this Oscars truly was a “failure pile in a sadness bowl”: A reported 40.3 million people tuned in to the Oscars telecast, making it the most-watched entertainment show in three years, Entertainment Weekly reports. (Suck it, Golden Globes.)

Host Seth McFarlane achieved what Anne Hathaway and James Franco could not: He helped put young adult asses in the seats. Ratings for the key 18-49 demographic were up a reported 11 percent. It does help that most of the movies nominated for Best Picture were those that the general public went to see, but McFarlane was undoubtedly a draw. So, kudos. But more tradition-bound Oscar aficionados may wonder if we perhaps lost something along the way:

Bob Hope: “Welcome to the Oscars, or as we call it at my house, Passover”

Johnny Carson: “I see a lot of new faces here, especially on the old faces.”

Seth McFarlane: “We saw your boobs” (which, by the way, could be the new official theme song for the website, Mr. Skin).

Monday morning quarterbacking the Oscar telecast is a tradition in itself. If the producers couldn’t wrangle all the men who would be Bond onstage, why not gather the Bond women? A 17-minute opening? That’s like 119 in TV minutes, especially when you’re making jokes about The Flying Nun. At the Oscars.

But this is not about Seth McFarlane (try telling him that). This is about the Oscar pundits who have been on this long strange trip since the Telluride and Toronto Film Festivals. It has been their job to track the ebb and flow of the races (and ours to chart their ever-fluid forecasts). They’ve walked a fine line between journalistic objectivity to impassioned advocacy. We reached out to Entertainment Weekly’s Anthony Breznican before the Oscar nominations were announced to ask about what he conceived to be the role of the Oscar pundit:

“It would be arrogant to think that one reporter could dramatically change what the Academy thinks or to make a recommendation that everyone follows. I think the job really is in two parts: You have to reflect the mindset of the people who are casting the ballots because readers want to know what’s likely to get an Oscar nomination. You have to do your diligence and try to talk to as many voters as possible. How much of this is the job is the question. You can spend too much time in that echo chamber. There were a lot of worthy performances and so while you’re out there trying to reflect the feelings of the Hollywood voters, I think it’s important to occasionally [put out there], ‘Everyone’s talking about these films, but here’s one they’re not talking about that I feel is worthwhile.’ If all you do is reflect, you’re not really performing your duty, which is to highlight good work.”

Oscar-race forecasting, impacted by forces objective (precursor awards) and subjective (Emmanuelle Riva is 85 years-old!) can be a mercurial process, stymieing even Nate Silver, the graph-happy breakout prognosticator from the last presidential election, who got Best Director and Best Supporting Actor wrong (he went with Steven Spielberg and Tommy Lee Jones).

The pundits’ respective acumens were put to the supreme test in a year.in which Academy members marked their ballots before the PGA, DGA and WGA nominations were announced.

So how did they do?

Slate.com has compiled an extensive (but not exhaustive)  "Oscar Predictions Dartboard" that ranks the pundits, according to the accuracy of their picks.  According to that site, the king of the prognosticators is Gold Derby's Tom O'Neil with a 91 percent success rate. His pick of Wreck-It Ralph for Best Animated Feature was the only choice that tripped him up in the categories that were analyzed. On the other hand, he correctly called the evening’s biggest surprise, Christoph Waltz’s Best Supporting Actor win over Tommy Lee Jones and Robert De Niro. His fellow Derby pundit Paul Sheehan also picked Waltz, which helped him rack up an 82 percent success rate and finish second, in a seven-way tie with EW's Breznican, Huffington Post's Michael Hogan and Indiewire's Anne Thompson, all of whom did not pick the Django Unchained star.

The pundits at In Contention, Gurus o’ Gold and Gold Derby, near unanimously charted Lincoln’s, slow, inexorable fade from frontrunner to also-ran behind Argo. Some, most notably Awards Daily’s Sasha Stone, were not happy about that, but they duly noted the sea change.

And now, it’s over. Ten more months until next year’s Oscar race begins in earnest. December 20. Mark your calendars. That’s the release date for Anchorman 2.