Tales Of The Military-Entertainment Complex: Why The U.S. Navy Produced 'Battleship' 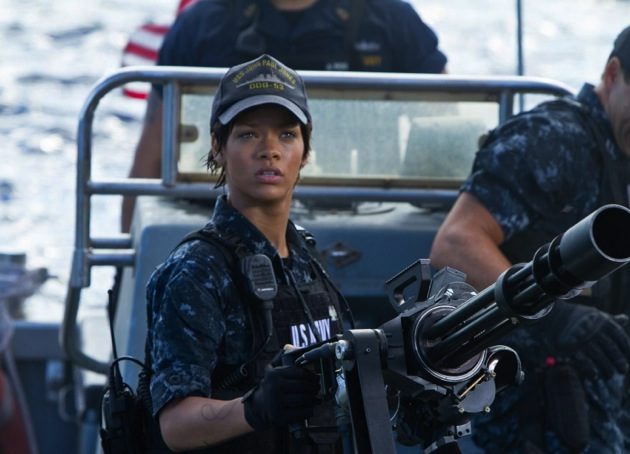 The biggest upset of this year’s Oscars took place weeks before the actual ceremony, when Zero Dark Thirty helmer Kathryn Bigelow was snubbed for a Best Director nod. Conventional wisdom holds that debates about torture and political bias in the Osama Bin Laden thanato-pic, which began weeks before the film’s release, derailed Bigelow’s chances at a second statuette. But the bigger story – one that’s hardly been told – is that Bigelow’s partnership with the Central Intelligence Agency during the production of ZDT inadvertently shined an unwelcome spotlight on the military-entertainment complex: the surprisingly close and definitely reciprocal relationship between Hollywood and the Pentagon.

If, as some have alleged, the CIA did share confidential information with Bigelow and ZDT screenwriter Mark Boal – or lied to them – about the role of torture in the manhunt for Bin Laden, that’s certainly cause for debate, censure, and possibly even stronger measures.(Right.)  But it’s not just the isolated cases of Bigelow, Boal and their sources that merit closer political scrutiny: It's time we took a good, hard look at how the military-entertainment complex operates.

Cooperation between Hollywood and the military brass goes back to the 1920s, when the Pentagon helped produce Wings, the first Best Picture Oscar-winner. The relationship between the studios and the armed forces has waxed and waned in the decades since, but tends to get cozier in times of conflict. During World War II, for instance, the Department of Defense enlisted Hollywood as its virtual press agent:  one Pentagon memo called wartime Disney shorts aimed at children – tomorrow's recruits – “an excellent opportunity to introduce a whole new generation to the [newly] nuclear Navy."

According to The Hollywood Reporter, it wasn’t until the 1980s, after memories of Vietnam had begun to fade, that "a steady growth [occurred] in the demand for access to military facilities and in the number of films, TV shows and home videos made about the military." Sure, the decade saw the release of a number of searing films about Vietnam, such as Platoon and Full Metal Jacket, but most of the military-themed films fed to the public were hyper-macho, bazooka-toting fantasy fare like Top Gun, Red Dawn, Rambo II, and Predator.

That increasing synergy between Hollywood and the Pentagon led to the current military-entertainment complex in which studios get to use taxpayer-subsidized military locations, equipment, personnel, and expertise in exchange for giving the military script approval. In this disproportionate exchange of power, the studios get significantly reduced production budgets, while the Pentagon gets to harness the power of cinema (and television) to advance a pro-war, pro-military agenda where multiplexes, flat screens and PCs become virtual recruitment offices.

A prime example of this dynamic at work was last year's Navy SEAL porn flick, Act of Valor, which hit theaters just a few months after SEAL Team Six assassinated Bin Laden. As a film drafted within the Pentagon and pitched to studios — a reversal of standard operating procedure — Act of Valor hails back to the days of World War II, when the military enlisted Hollywood in the production of naked propaganda. (In an inspired but ultimately unsuccessful move, active-duty NAVY Seals also made up the cast.) The film was received as the propaganda that it was; the San Francisco Chronicle wrote in its review that "Act of Valor is intended to wow audiences with high-test action while planting a giant wet kiss on the smacker of the U.S. military – and it scores at both tasks."

The Military-Entertainment Complex doesn't just produce overt propaganda, by the way. It has also had a hand in mindless, seemingly apolitical popcorn movies. Take Battleship, director Peter Berg’s board game-based stinker from last summer. (The picture is noteworthy for practically ending the big-screen dreams of  Taylor Kitsch and Rihanna.) Along with Act of Valor and the upcoming Captain Philips and Lone Survivor, Battleship was one of four films that the U.S. Navy had a hand in producing last year.

U.S. Navy documents, acquired through a Freedom of Information Act request via Muckrock (where you can view them in their entirety), show that the Department of Defense’s decision to work with Berg and Universal hinged on one main question: “Do we believe that [the movie] could have a positive impact on recruiting?” The Navy concluded yes, confidently declaring, “Battleship will certainly continue to be a conversation starter that carries our ‘brand’ to many Americans who aren’t familiar with their Navy.”

Apparently unconcerned that Battleship is about naval forces battling an alien invasion, Navy officials got Universal to agree “to consult with the DoD Project Officer [the technical advisor] in all phases of pre-production, production, and post-production that involve and/or depict the U.S. military” in order to ensure that the script “positively represents our service and our Sailors” and “accurately portray[s] the Navy.”

Specifically, that meant the Department of Defense had veto power over every word of the script, with any military-related changes having to go through another approval process. The DoD also mandated contractually obligated screenings of the rough cut, when changes to the film could still be made, as well as a screening of the final cut in Washington, D.C., before the film’s theatrical release.

The Department of Defense also insured that its public affairs personnel were able to take pictures and videos of the film’s cast, crew, and sets and were granted full permission to use those images, as well as any of the film’s marketing materials. The Department of Defense Production Assistance Agreement states that the Navy would employ those pictures and videos solely for internal use, but doesn’t guarantee that they won’t be visible to the public. “Some of the imagery may be viewed by the general public if posted on an open DoD web site or on ‘The Pentagon Channel,’ or other publicly-accessible media source,” states the agreement,  opening the door to use those backlot shots as a recruitment aid. As if life as a Navy sailor had anything to do with a mission to destroy an alien mothership hovering over Hawaii.

In the case of Battleship, the Navy reportedly agreed to participate because “whether or not we supported Battleship, the film was going to be made – it was going to carry our brand and represent who we are to the American people.” That would have been an unfavorable scenario for the Navy, but also an extremely unlikely one, since Battleship’s production budget – already $209 million with the help of the Navy’s resources, including props, backgrounds, extras, and technical expertise – would have probably been too prohibitive had Universal been forced to bear all those costs.

The Navy also considered the question “Can we support a film without impacting our operations?”  It answered for itself:  “Because filming took place on top of already scheduled training events, it did not impair the exercise and there was no cost to the Navy or American taxpayers.” But the lack of any immediate or upfront costs in this one case doesn’t address the questions of why citizens should subsidize Hollywood films – since all the military expertise and materiel appearing in these films are paid for with taxes  – or how Americans would benefit from publicly funded propaganda for state-supported violence.

In an interview with the Los Angeles Times, an Army spokesman indirectly responded to those concerns, stating, "We [the military] get asked all the time, 'Why do you market?' We're a nation at war going on 11 years, which is … the longest period of consistent conflict that the U.S. Army's ever been involved in".

Given the recent news that military suicides surpassed combat deaths and surged to a record high in 2012 and that sexual assault remains a disturbingly frequent and unpunished behavior within the armed forces, you can expect Pentagon brass will be looking for more positive depictions of the lives of U.S. soldiers and sailors in the coming months. And as studio budgets continue to rise and military enlistment continues to decline, neither Hollywood nor the Pentagon has any reason to disengage from the military-entertainment complex.

And if studios are going to continue to get into bed with the military then taxpaying moviegoers have a right to know when they are being bombarded with propaganda that they've essentially financed. A modest step toward greater transparency - one that's easy and cost-efficient to boot - would be adding a disclosure tag at the beginning of movies that have involved the participation of the armed forces. The Department of Defense already mandates that all movies the military helps to produce must thank the relevant branch of service, but that acknowledgement typically occurs at the very end of the closing credits. Such a disclosure tag wouldn't just provide a franker context for the film to come. Given the Pentagon's less-than-stellar track record with film production, it would also serve as a warning to audiences that they should  lower their expectations. Now that's patriotism.