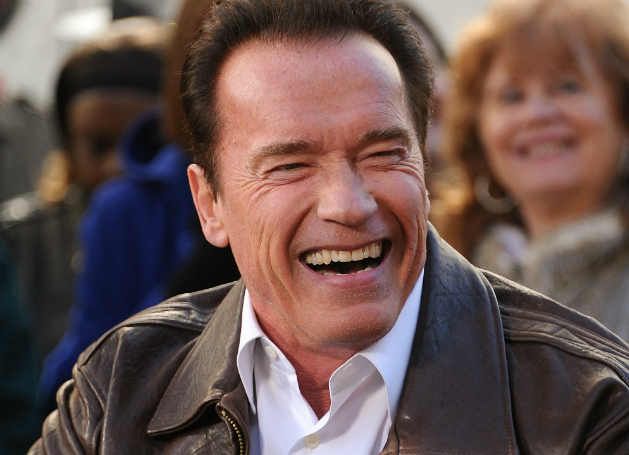 Oh, that Arnold Schwarzenegger. Even taking on the infamous Reddit Ask Me Anything (AMA), the ex-Governator did things the Arnold way. From pimping his action movie comeback The Last Stand to delighting the internetz with handwritten (via iPad) quips and quotes ("It's not a tumor! — Arnold") to taking the briefest of political detours as he set fanboy hearts a'flutter, Schwarzenegger proved he's still got what it takes to charm the fickle masses. (We'll see if they vote this weekend where it really counts: At the box office.)

Arnold, who returns to the big screen in Korean director Kim Jee-Woon's contemporary Western The Last Stand this Friday, on which directors he'd still love to work with:

"I would like to work with Michael Bay and Steven Spielberg. Also Sam Raimi would be great to work with."

Regrets — I think we can imagine Arnold has a few. But can you guess his greatest regret of all?

"I most regret not doing The Rock. I love the movie, and it turned out well. When it was offered to me there was only an 80 page script with a lot of handwriting and scribbles and it didn't seem fully baked. But they obviously did a fantastic job."

You know, typing on a keyboard can be so cumbersome. (Plus, anyone's assistant/intern/publicist can do it on their behalf... just sayin'.) So Arnold took to his iPad to bang out some handwritten AMA answers in glorious Arnold cursive. Like this confirmation that the already-confirmed Twins sequel is indeed happening: 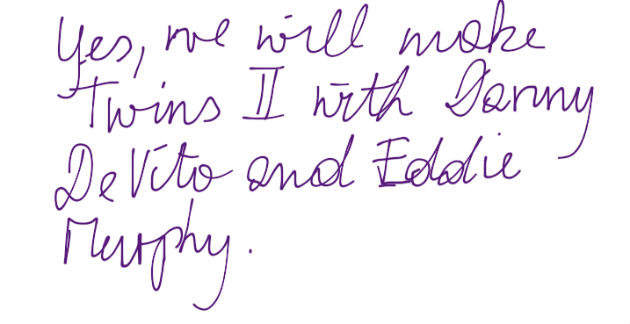 The eternal question: "Is it a tumor?"

Of course, the former California governor had to balance things out with some politi-speech real talk about the Republican party:

"The most important thing is that we need to be a party that is inclusive and tolerant. We can be those things and be the party we always have been. We need to think about the environment — Teddy Roosevelt was a great environmentalist and people forget Reagan was the one who dealt with the ozone layer with the Montreal protocol. We also need to talk about healthcare honestly — Nixon almost passed universal healthcare. We need to have an talk about immigration and realize you can't just deport people. We need a comprehensive answer. We also need to stay out of people's bedrooms. The party that is for small government shouldn't be over-reaching into people's private lives.

Mainly, we need to be a party where people know what we are for, not just what we are against."

...but he brought it back around to the important stuff: