Genuine Affleck-tion! 'Argo' Is The Best Picture To Beat 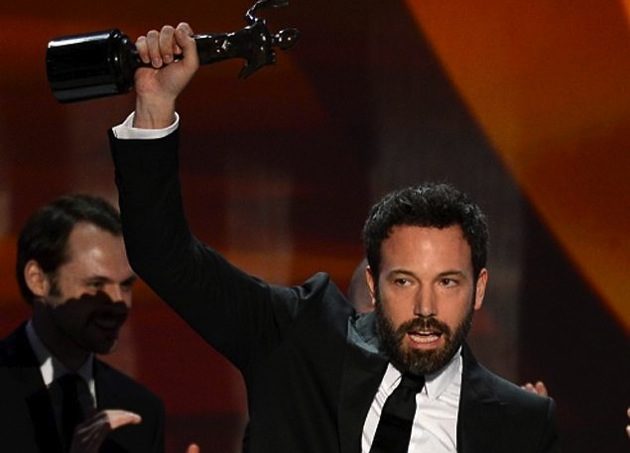 Two weeks after carrying home the big prizes from the Critics’ Choice and Golden Globe Awards, Argo firmly established its Oscar front-runner status with another one-two punch in the form of the PGA's Motion Picture Producer of the Year honor and the SAG Award for Outstanding Performance by a Cast. And in a season of confusion and contradiction, that front-runner status gives Argo traction that none of its Best-Picture rivals have.

The PGA win was not a surprise, especially after Argo’s strong showing with the Hollywood Foreign Press Association. Content-wise, it's the type of film that charms producers, being a taut political thriller 65% of the time and a stack of insider Hollywood jokes the other 35%. Apart from that, you have The Affleck, and the time has come to love and praise The Affleck. Rejuvenated and relevant again, Ben Affleck is this year’s Oscar story. When the nominations came out, who was the “snubbed” director? It wasn’t Kathryn Bigelow, Paul Thomas Anderson, or Wes Anderson, the three directors whose films appeared on the most end-of-year lists. It was The Affleck, and within 72 hours, The Affleck was redeemed with populist awards broadcast live on the CW and NBC, making Argo the People’s Film and Affleck the Oscar story of the year.

For Best Picture prognostication, the PGA Award is a major get. Since it was started in 1989, the Producers Guild has awarded the eventual Best Picture Oscar winner nearly 70 percent of the time, and has been perfect over the past 5 years. Additionally, the PGA uses a preferential ballot just as the Academy of Motion Picture Arts and Sciences has done since 2009. What this means is that Argo and Affleck do not need to top all ballots, they just need to be agreed upon by most ballots. I don't have scientific findings to present here, but think about the conversations you've had about the Best Picture nominees:  Lincoln, Les Misérables,  Django Unchained, and Silver Linings Playbook are much more polarizing than the crowd-pleasing Argo.  For what it's worth, Argo also has the highest Rotten Tomatoes score of all the nominees, 96, followed by Zero Dark Thirty, 93, and Amour, 92.

The movie's SAG win was more of a surprise. Argo is not an Actor’s Movie. This is not to say the award was not earned, simply that most of the attention was divided between the flashy Les Mis and the kitchen sink acting of Silver Linings Playbook. But there’s that word: “divided.” The Screen Actors Guild is a massive organization of nearly 160,000 members (though only current on dues are eligible to vote), so while theater types might have leaned toward Les Mis and classically-trained types might have opted for Silver Linings or Lincoln, the one film the Guild ended up agreeing on was Argo and its Affleck-led cast. It was, in a word, the most popular. (Keeping with the populist theme, note how the SAG Awards are the only guild awards that appear on billboards).

SAG has a terrible track record with Best Picture. The two top awards aligned less than half of the time since SAG started their awards in 1995. But this is a season when stats mean less than they would normally. The film with the most Oscar nominations is no longer the film to beat. Harvey Weinstein, who put Affleck on the Oscar map with the 1997 movie Goodwill Hunting, is fighting an uphill battle. There’s a legitimate front-runner in town, and it does not have the director’s nomination assumed necessary. (And I'm not talking about Django Unchained.)

This season, the Best Picture race is all about tone and attitude, and Argo and its affable director are all about tone and attitude. Affleck is an A-lister once again, charming every room he enters — his jokes won the room at the PGA breakfast Saturday morning — and his film's recent run of awards-season honors have made its Best Picture prospects impossible to ignore. After months of having several films on the radar, there is finally one at the center of it.