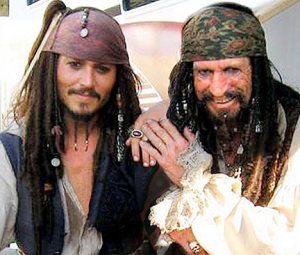 Johnny Depp is still sailing toward another round in the Caribbean, but the swashbuckling will have to wait a couple years. Disney unveiled a slew of dates for a half-dozen of its anticipated titles Monday with Pirates of the Caribbean 5 anchoring July 10, 2015.

Depp will be on deck once again as Jack Sparrow with Jerry Bruckheimer producing from a script by Jeff Nathanson. The Pirates series has grossed over $3.7 billion worldwide. The last feature, Pirates of the Caribbean: On Stranger Tides took in a cool $1.043 billion globally. No director has been named for the next installment.

Also headed to theaters from Disney is Maleficent, the untold story of the villain behind the 1959 classic, Sleeping Beauty, which stars Angelina Jolie in the title role as well as Sharlto Copley, Elle Fanning and Sam Riley. It is moving to a July 2, 2014 release from its March 14, 2014 original.

The Muppets 2, starring Ricky Gervais and Ty Burrell will head to theaters March 21st in 2014, while Chris Evans starrer Captain America: The Winter Soldier will open April 4, 2014. The pic directed by Anthony and Joe Russo will be available in 3-D. Also in 3-D is Marvel's Guardians of the Galaxy, set for August 1, 2014 with James Gunn as director. And 1952 (3-D)m starring George Clooney is set for December 19, 2014.

Keith Richards, who appeared as Captain Teague in the franchise in On Stranger Tides and 2007's At World's End teased last November he may head back to Pirates once again.

"I spoke to Johnny a couple of weeks ago and he said, 'Are you up for another one?' I can leave it at that because I know no more," Richards told BBC 6 Music last year. "But I do have the costume!"