Hey, Uma, Oprah: Will Seth MacFarlane Be The Oscars' Next David Letterman? 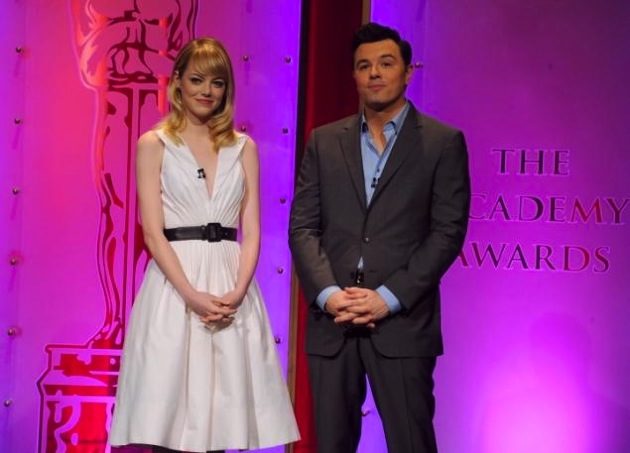 When the Oscar nominations were announced on Thursday, viewers across the globe were treated to Seth MacFarlane tossing out jokes that were exhausted before they were tried. Every line about how early the nomination announcements were fell flat on the West coast, so I can only imagine how weak they played in time zones that were  already awake. His general onstage demeanor wasn’t doing him any favors either. He appeared shaken and unprepared, and while I doubt the nomination announcement was heavily rehearsed, I’m concerned about the man’s ability to compose himself on a global stage. He's good on video and audio, but how is he live?  (Recall last year's Emmys, where he couldn't even find his mic.)

Perhaps I’m a classicist, but not wearing a tie made MacFarlane look slovenly in a manner unbecoming of the film industry's highest honors. Also, he insisted upon clapping into his mic. He brought on the usually affable Emma Stone (because “there’s nothing creepier than a guy standing by himself in Hollywood at five in the morning,” apparently), but even she couldn’t inject pre-dawn life into pseudo-jokes about how all of the Supporting Actor nominees were winners.

The banter wasn’t even banter. After introducing her as the star of Gangster Squad, MacFarlane promptly rescinded the title on account of the film being an ensemble piece. This was a line written poorly with the intention of commenting on the poorly-written line.  Stone looked uncomfortable, which made MacFarlane look exactly like that creepy guy he claimed he didn't want to be.

It didn't end there. Some of the more painful nuggets:

“Those of you who weren’t nominated, you can stop doing interviews where you pretend you had such a great time making the movie.”

“These are the five people who are the very best at sitting in a chair and watching other people make a movie.”

Throw in an uncomfortable gag about flirting with Harvey Weinstein, a Hitler joke comparing Amour to the Anschluss, and something something Meryl Streep and you’ve got an appetizer for a potentially ugly ceremony when the Oscars are handed out on Feb. 24.

As an ostensible part of his hosting duties, MacFarlane is helping write the Academy Awards ceremony, so is this indicative of how the ceremonies will go? With a Best Song nomination, the AMPAS have guaranteed us a song from MacFarlane, but when you get a song-and-dance man, you expect song and dance. But he’s not just song-and-dance. MacFarlane is a satirist, a prankster, and an activist, but never in a way that coalesces. He owns a lot of hats, but can only wear one at a time.

The video MacFarlane released after his host announcement featuring his father was charming and promising, combining Billy Crystal-style schtick with MacFarlane’s absurdist tendencies. The strange host selection all of a sudden seemed refreshing. Ted was a hit film with high approval, so maybe the AMPAS had succeeded to find the youth bait they wanted.

But then that youth bait baited some youth in the wrong way. MacFarlane announced that he and producers Craig Zadan and Neil Meron are doing a college search for Oscar presenters, to glimpse the future of “film and its legacy.” It’s the Oscars, not an internship, and replacing A-listers with faceless UCLA undergrads will alienate TV audiences who watch to celebrate  Hollywood now, not later.

The Academy's announcement in October that it had selected MacFarlane to host reeked of desperation. It reminded me of the James Franco/Anne Hathaway anti-show. After Thursday's performance, the desperation appears to be emanating from MacFarlane himself. He swallowed his jokes, he shuffled about, and he looked uncomfortable. In a year where undergrads are replacing A-listers, I'm more skeptical than ever that MacFarlane can ring-lead the circus without becoming the Academy's next David Letterman.