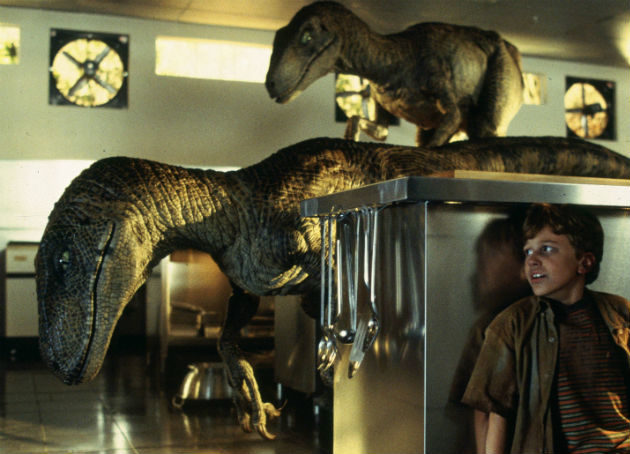 The news of Jurassic Park 4 probably sent a lot of you scrambling for your brain's groan button, and I can't blame you. Though the original film is an important milestone in special effects, and boasts the last decent score John Williams ever wrote*, it preserved Michael Crichton's dubious grasp of human nature and the book's b-movie philosophizing - and the less said about the sequels, the better (especially the second film, which seems to consist largely of references to classic monster movies).

Still! The dinosaurs, even the ones created using paleolithic CGI back in 1993, look insanely great, and given the advances in special effects that have occurred just in the 12 years since Jurassic Park 3 we can look forward to even more spectacular sauropods. But it isn't just CGI that has advanced in the last twenty years; paleontology has also made some rather amazing discoveries.

Beginning with the discovery of the feathered Sinosauropteryx fossil in 1996, over 30 new specimens have been found, and scientists are beginning to conclude that almost all dinosaur species probably had a coat of feathers. That sounds like a small difference, but it's huge when you consider how radically that changes the appearance of these beasts.

Despite the fact that the first feathered fossils of Archaeopertyx were discovered in the 1860s, dinosaurs were still seen in a largely reptilian context until quite recently. The 1970s and '80s saw some major breakthroughs (among them the acceptance of the asteroid collision theory of dinosaur extinction), but even though the relationship between birds and dinosaurs was becoming more fully understood, that context remained the norm.

Now, it would be a mistake to assume anything in Crichton's novel is scientific, but his book did make great effort to plausibly reflect the consensus at the time. Jurassic Park, published in 1990, partly reflects that consensus. Dinosaurs in the novel were cloned from preserved DNA found in fossilized amber, with gaps in decayed DNA filled in using amphibian, reptile, and avian DNA. And regardless of the DNA used, as we saw in the film, with the exception of Velociraptors, they still largely resembled giant reptiles.

However, Spielberg & Co. have the chance to update their look, and best of all it wouldn't even require much of a stretch, plotwise, to explain the genetic retcon. Simply explain that advances in paleontology proved that their previous cloning relied too heavily on amphibian and reptile DNA. New clones corrected that mistake, relying more on avian DNA, and the result is a pack of dinosaurs that bear colorful plumage that would make Liberace seethe with jealousy.

This doesn't even begin to get into the new species we've discovered, like the aforementioned Sinosauropteryx (which would have been about the size of a chicken), that could populate the new film. And why should it have to? Apparently, T-Rex probably had feathers too. I could think of nothing cooler than that.

[For more on feathered Dinosaurs, check out this great article from Nature, published last summer.]