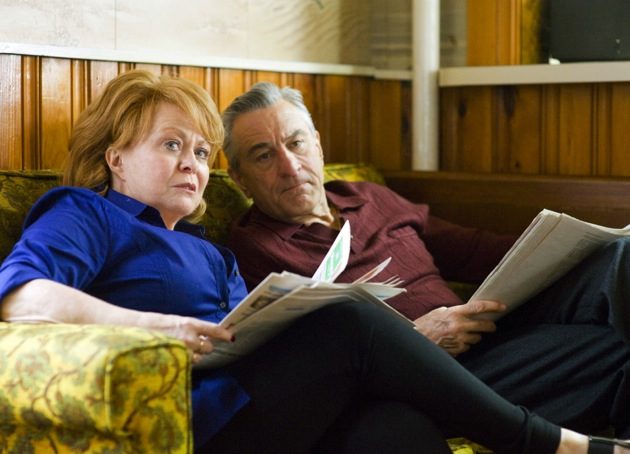 Jacki Weaver says she has no Oscar game plan except to buy a new pair of shoes.  "I love shoes. I love shiny things," the Australian actress told Movieline this afternoon, after learning she had been nominated for a Best Supporting Actress Oscar for her fine work in David O. Russell's Silver Linings Playbook.

Weaver, who plays an Italian-American Philadelphia housewife so well that you can almost smell the braciole when she's onscreen, explained that she learned of her nomination while watching TV "in my Qantas pajamas" after flying into Los Angeles en route to Texas for her next acting gig, as Lee Harvey Oswald's mother, in David Landesman's Parkland.

"I wasn't sleeping well so I turned on the TV. I honestly wasn't expecting it, and it did take me quite by surprise," Weaver said. "I yelled out a rude word."

That word began with "f, as in Freddie," the actress said in her jammy Australian accent. "And it sounded like the way Australians say 'park,'" she explained. "We drop the 'r' and say, 'pahk.'"  She went on to explain that said word is "a term of wonderment" in her country," then laughed: I don't know why I don't just say the word."

She never did, but did tell us that she had not spoken to her fellow cast members and nominees,  Robert De Niro, Bradley Cooper or Jennifer Lawrence, but had talked to Russell.  "He told me that he’s really proud of me and he’s thrilled," she said.  "I adore David."

She likes Americans a lot, too.  Weaver explained that "I haven't changed but my life has changed,"  in the two years she since earned her first Oscar nomination for the brutal 2010 Australian crime drama Animal Kingdom.  "I've now done my fifth film in America and to be embraced so heartily by Americans has been wonderful. It's a very generous culture, American culture," she added. "I know you can't generalize 300 million people, but everyone I've met her has been so lovely to me."