INTERVIEW: Matthias Schoenaerts Says Falling For Marion Cotillard In 'Rust And Bone' Was Not Exactly A Challenge 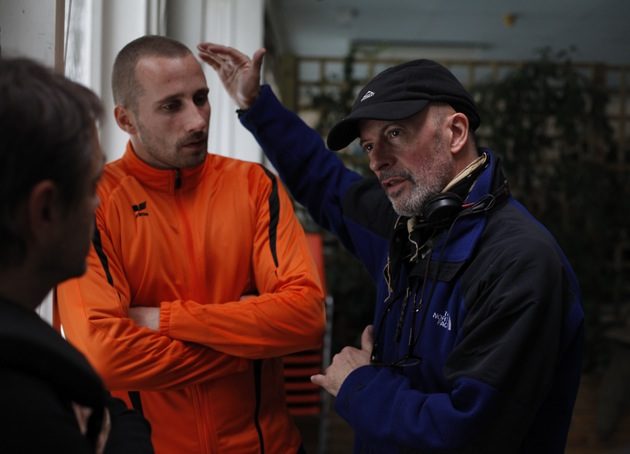 If you haven’t yet heard of Matthias Schoenaerts, a.k.a. the Belgian Brando, you’re going to start running out of excuses. The son of actor Julien Schoenaerts, Matthias is already a sex-symbol in his native Belgium. He made his on-screen debut alongside his father in the Oscar-nominated Daens and broke Flemish box-office records in Erik Van Looy’s Loft. But he really burst forth onto the world cinema stage last year with his gripping turn as the lead in Michael Roskam’s Academy Award nominated cow-hormone crime-epic Bullhead. Injecting testosterone into his thigh with all the flair of a young Robert De Niro, Schoenaerts tempered his young thug’s animalistic rage with an innate vulnerability that’s earned him comparisons to Ryan Gosling and Tom Hardy. 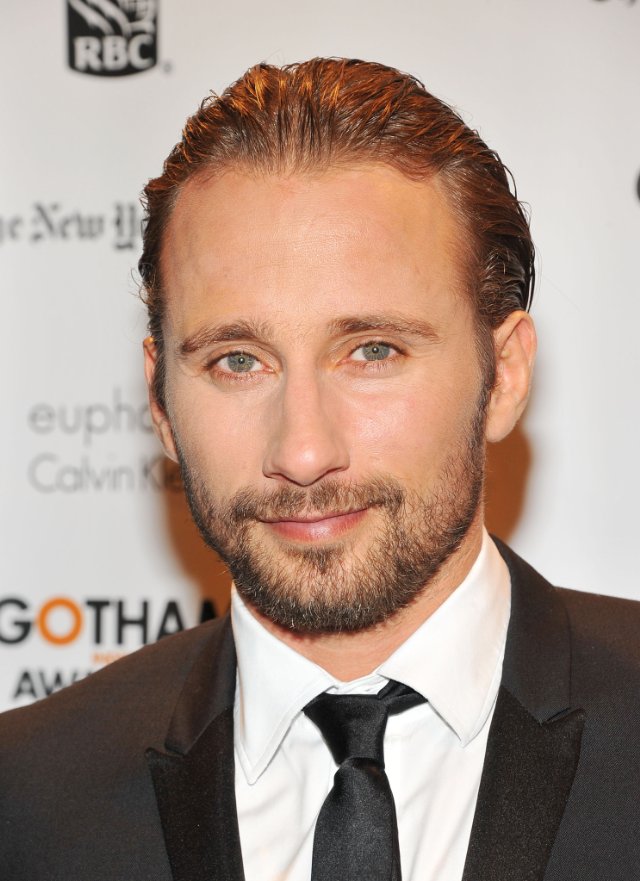 His reward: getting to star opposite perennial candidate for Most Beautiful Woman Alive Marion Cotillard in Rust and Bone, renowned director Jacques Audiard’s follow up to A Prophet. Audiard’s films — from the smoldering romance in Read My Lips to the frustrated aspirations of The Beat That My Heart Skipped — paint the underworld as an intrinsically human place where criminals can’t help but dream in the face of the harsh world in which they live. So, who better to play Audiard’s latest brute with a heart of gold than Schoenaerts?

And as the end result proves, the two are a match made in heaven. Rust and Bone, which is generating awards buzz, including Golden Globe nominations for Cotillard and the film in the Foreign Language category and populating 2012 best-film lists, charts the unlikely romance between an impoverished beachside bouncer moonlighting as an underground fighter and an orca trainer whose life is thrown into disarray after a tragic tango with the aforementioned killer whales.

What could otherwise come across as improbable melodrama feels palpably real and poignant in the hands of Audiard, Cotillard and Schoenaerts. Which is to say, break out the handkerchiefs and don’t look back.

Movieline caught up with Schoenaerts by phone as he packed for a trip to Antwerp. He talked about the joys of working with Audiard and Cotillard, beefing up on junk food, and why his dream role could just as easily be a character who works at McDonalds.

Movieline: I became a fan of yours after Bullhead, and I love Jacques Audiard’s films, so I was elated to find you two working together. What brought you to this role?

Schoenaerts: What attracted me was that it was a hard character to tackle because he's very ambiguous. There’s a lot about this guy and it was a challenge to portray him in the richest way possible and not make him this one-dimensional thug. The screenplay to me was raw, it was gritty, it was very poetic, it was touching. It was human. At the same time, it was set against the backdrop of the economic crisis, which is the reality for a lot of people nowadays. That’s what I like about Jacques. His screenplays have a very naturalistic feel to them but at the same time, they’re really genre films.

You prepare really intensely for your roles. For instance, you ate over 3,000 cans of tuna to beef up for Bullhead. What did you do for this one?

Of course, there was the physical preparation, which required me to start boxing. I had to gain weight again, and I had to grow a belly. So, for a couple of months, I was boxing everyday, doing MMA training and doing some weightlifting. I was also eating a lot of junk food to get this body that looked strong but not really fit and a bit unhealthy because the guy is poor so he doesn’t have the means to feed himself properly. After that, I worked a lot with Jacques.  We explored scenes, improvised and got to know each other.

I’m curious how he works because his movies are so naturalistic.  Did you guys talk a lot about the characters, or did he just give you the broad strokes and let you run with it?

[Talking] is something that we do upfront, but once we’re on set, it’s all about being instinctive and intuitive and not to have too many preconceived ideas on a scene. It’s just, “We’re here in the moment, let’s bring the scene to life. Let’s make it real and vivid.” He’s all about that. He’s really an actor’s director. He’s with you all the time and he’s really generous because he respects actors a lot. I think it’s because he worked in theater for many years. He’s really working with you, he’s challenging you and he wants you to challenge him. It’s fabulous.

Was there a lot of improvisation on set?

No. There’s room for improvisation but, how shall I say, it’s not a way of working. Everything was scripted and of course once in a while things happen, so you just go with it. But improvisation is certainly not a method on set.

You probably can’t improvise fights like that without suffering serious head trauma.

Oh, yeah. There’s also a lot of rehearsing. It takes a lot of preparation to do it. There’s a stunt team that really choreographed everything and lined everything up and we rehearsed over and over again.

Well, those fights looked brutal. But what I really love about your work--in this and Bullhead--is how you bring an inherent gentleness to such tough characters. Is that the key to approaching tough guys — going against the grain?

It’s not going against the grain! It’s being human. Being human is being a lot of things at the same time. Your appearance shouldn’t define who you are, and that’s what I like, the contrast between people looking like the opposite of what they truly are deep inside.

How was it working with the actor who plays your son. They say it can be hard to work with children, but you guys had great chemistry.

It was intense. He was a very particular kid and pretty young, so we rehearsed a lot with the kid. We worked quite a lot up front. All of sudden, this kid really opened up and somehow got attached to me, and I got attached to him. From there on, it became a very natural thing.

And Marion Cotillard? That looked pretty natural, too.

It was that same natural connection that happened on set. We had something very genuine going on. She’s obviously extremely talented and very generous. We really had a ball. It was intense. It was not an easy film to make for many reasons, but we enjoyed every second.

So, what was the hardest part of making the film?

I think it’s always a matter of finding the right balance between all the elements of the story, and the characters and the relationship being portrayed. Especially for this relationship between these two people, it’s a very thin line to fall back into a sentimental portrayal or something that becomes vulgar. That’s probably the biggest challenge.

It’s a very much a melodrama, but it doesn’t feel sentimental at all. For example, I love that line where she’s giving you that intense talk about how to have a proper relationship, you take it all in and then respond, pardon my rough French translation, “let’s get it on.”

(Laughs) Well, actually that was NOT scripted, that was something I made up on set.

Really? I knew it! I feel like I’ve told several girls that in my life.

Do you do that at all—go back to a catalog of past loves and use it for a role?

So, do you ever go back to past bar fights and use those for inspiration?

Of course, of course. But I love that line when you put her first boyfriend down. Was that improvised?

That was scripted. At the same time, it had to be very menacing without being a menace. It had to be a very genuine question, which was kind of menacing but we didn’t want it to be played as menace.

Well, I congratulate you for making me feel empathy for a bouncer.

I like underdogs, I like anti-heroes — people that have a hard time overcoming things in life. What attracted me to those two characters, they have everything against them and they have to come from really far to get somewhere. I’m just looking for touching characters. When I read [a script], I want it to speak to me. I want it to touch me on a human and profound level. That could be a car mechanic, it could be someone who works at McDonalds, it could be a pianist, it could be so many things. To me, it’s not about a certain type of character. To me, all people are to some extent the same. So, it’s all about the screenplay and the specifics of the character within that screenplay.

It seems to be working for you. I hope we get to see you in more movies in the States. Do you have any dream directors you’d like to work with?

I don’t know. I could say, P.T. Anderson, David Lynch, Michael Mann, Gus Van Sant. There’s so many, and I’m forgetting a lot. The guy who directed Blue Valentine! [Derek Cianfrance] There are so many.

Michael Mann would be lucky to have you-- I’ll send a letter to his agent right now.

Okay, my last question, I have to ask… the love scenes with Marion — and without her legs. How did you guys pull that off?

They just do it with green socks on her legs and paint it over digitally.

There must be a lot of choreography to get it right then—keep your leg here, move your arm there. Probably a lot less sensuous than it looks.

Yeah, of course, because then it makes shadow. There are a lot of technicalities, but once you’re doing it, you just go with it.

I assume falling in love with Marion Cotillard is not one of the more challenging tasks you’ve faced.