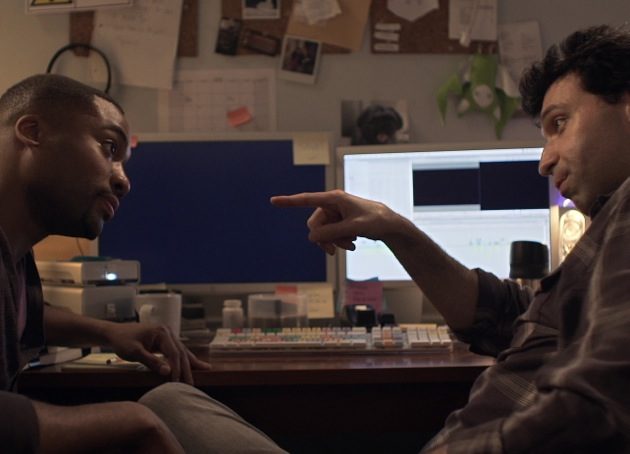 The payoff in this official trailer for Daniel Schechter's Supporting Characters is in the very last line, delivered by the always acerbic Kevin Corrigan (Pineapple Express).  I'm not going to spoil it, so check it out for yourself. Along the way you may also feel like you're watching a preview for an episode of Girls since Alex Karpovsky has one of the lead roles in this film and Lena Dunham also makes a brief, tattooed appearance. (Karpovsky was also memorable as the very frank stand-up comic Ian Gilmore in Mike Birbiglia's Sleepwalk with Me.)Here's the official synopsis for the picture:

Best friends Nick (Alex Karpovsky, Girls) and Darryl (co-writer Tarik Lowe) are a New York film editing duo hired to salvage a botched comedy from a manic director (Kevin Corrigan, Pineapple Express) gone AWOL. But what starts as a simple job quickly sends their relationships—with their significant others and each other—reeling. Amidst trouble with his fiancée (Sophia Takal, V/H/S), Nick finds himself falling for the film's flirtatious ingénue (Arielle Kebbel, 90210); Darryl, meanwhile, struggles to focus on his editing work in between fights with his tempestuous girlfriend (Melonie Diaz, Be Kind Rewind). With real humor and heart, Supporting Characters offers a sharp, knowing take on life and love in the big city.

Schechter, by the way, is slated to direct the Jackie Brown prequel that's currently in pre-production with Jennifer Aniston, John Hawkes and Mos Def.

Supporting Characters is available on VOD on Jan. 22 and opens in select theaters Jan. 25.