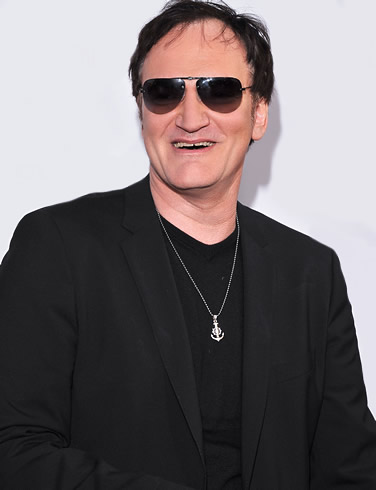 Filmmaker Quentin Tarantino defended the heavy dosage of violence in Django Unchained, his latest film starring Jamie Foxx, Christoph Waltz, Leonardo DiCaprio, Kerry Washington and Samuel L. Jackson. As with many of his past offerings, Tarantino's Oscar hopeful includes a graphic depictions of blood and gunshot victims. Tarantino was asked about the violence over the weekend in New York in the wake of the tragedy in a Connecticut elementary school that left 26 dead, most of them children.

At a Saturday press event, Tarantino said that real-life violence is the fault of perpetrators and didn't appear to accept a correlation between incidents like the weekend's massacre in Newtown, CT and violence on the big screen.

"I think you know there's violence in the world, tragedies happen, blame the playmakers," he said according to BBC, adding, "It's a Western. Give me a break."

Still, Django star Jamie Foxx did say he believes the big screen can influence people's actions. "We cannot turn our back and say that violence in films or anything that we do doesn't have a sort of influence. It does," he said.

In the spaghetti-western style feature, Foxx pays a freed slave who sets out to rescue his wife from a ruthless plantation owner, played by Leonardo DiCaprio.

Representing more divide among the Django crew that is perhaps a microcosm of society generally, Christoph Waltz said he didn't believe films provoke violence, adding that the film contained violence because it was in fact part of American history.

"The media's responsibility is greater than the story teller is because... Django is violent, but it's not inspiring violence," said Waltz.

Kerry Washington offered up that violence in film can serve as an important learning vehicle, educating audiences about historical atrocities such as slavery. "I do think that it's important when we have the opportunity to talk about violence and not just kind of have it as entertainment, but connect it to the wrongs, the injustices, the social ills," said Washington.

Meanwhile, Paramount decided to move premiere events in Los Angeles and Pittsburgh for Tom Cruise's new action pic Jack Reacher "out of honor and respect for the families of the victims whose lives were senselessly taken." The feature opens with sniper shooting several people.

And Sunday night, new episodes of Family Guy and American Dad were dropped, with Fox network opting for repeats of the shows in order to avoid showing any potentially sensitive content. A scheduled repeat of The Cleveland Show was also swapped out.

Twenty six children and six adults died at Sandy Hook school in Newton, CT. The gunman is identified as Adam Lanza, 20. He killed his mother before heading to the school Friday.