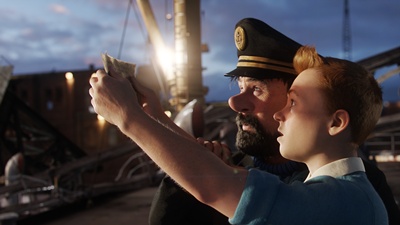 Peter Jackson and Steven Spielberg will switch roles in the follow-up to last year's Tintin. Also in Friday's round-up of news, Lincoln crossed the $100 million mark in the U.S.; The Who is heading to the big screen; Dylan McDermott is headed to a Stephen King pic; and a look at some of the weekend's new Specialty Release newcomers.

Peter Jackson Plans Tintin 2 for 2015
Jackson will begin work on a sequel to last year's feature version of Tintin before he completes his current Hobbit trilogy. Jackson told reporters in Belgium that he would work on the follow up to The Adventures of Tintin: Secret of the Unicorn next year. The first Tintin film was directed by Steven Spielberg with Jackson as producer; Spielberg revealed in February that the Oscar-winning pair would swap roles for its sequel, The Guardian reports.

The Who Pic Heads to the Big Screen
Actor Cary Elwes will direct the story of the life and death of Kit Lambert, the rock impresario and manager of The Who, with production set for late spring 2013. Lambert discovered The Who, ironically, when he was trying to make a film about a band, THR reports.