Mimes, Monkeys, And The Ghost Of 'Fitzcarraldo': Inside Brazil's Amazonas Film Festival 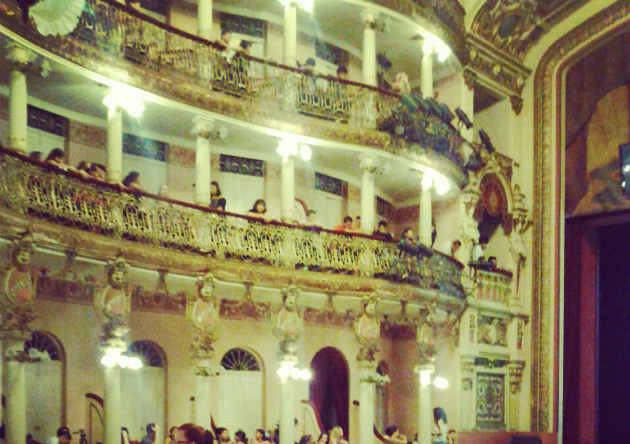 There are no movie stars in Brazil. When a local comedy show asked people to list the most famous Brazilians, the top three were Gisele Bundchen, Pele, and Blanka — the green ogre from Street Fighter 2 who got his powers from the bite of an Amazonian electric eel. So far in 2012, not a single Brazilian-made movie has cracked the top ten in the country's own box office — in fact, to find a domestic hit, you have to go all the way down to the romantic comedy E Ai...Comeu?, which to date has made about half of as many reals as Alvin and the Chipmunks: Chipwrecked. [Ed. correction: The production Até que a Sorte nos Separe does rank as Brazil's #10 box office performer of 2012.] But Brazil does have soap stars. And at the Amazonas Film Festival in Manaus, Brazil — the heart of the Amazon — soap stars, dozens and dozens of them, all handsome and cheerful and thrilled by their own fame, were the main event.

That a film festival celebrates soap stars makes no sense, until it does. One of the major reasons for trekking these TV celebrities out to Manaus is to lure schoolchildren to attend the free festival where, between hooting hellos at their idols, they watch a movie, fall in love with film and kickstart the next generation of Brazilian cinema. 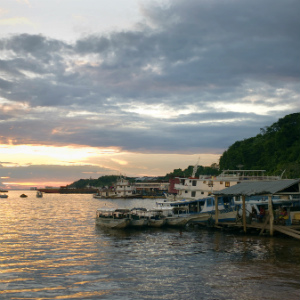 The second reason for the soap star deluge is to make the rest of the country pay attention to Manaus. Until very recently, the 2.2 million capital city of the Amazon was only accessible by plane and boat; most of the celebrities in attendance from the southern metropolises of Rio and Sao Paulo had never been there at all. It takes longer to drive from Rio to Manaus than it does to drive from Los Angeles to New York, and the cultural distance between the two is so vast that the TV actors kept insisting to us gringo journalists that Manaus wasn't even really Brazil, but more like how we think of Alaska.

But if Manaus has a lot to prove, they've also got the money to do it. In case you haven't heard: Brazil is rich. And Brazil sets aside .85% of the federal budget to support the arts, while the United States manages a meager .066% — and Mitt Romney still wanted to kill Big Bird. The 2012 Amazonas Film Festival was a lavish spare-no-expenses wonder: Every night one to two movies screened for attendees sitting in the velvet chairs of the Teatro Amazonas, an opera house built in 1896, and every day, the festival hosted trips to waterfalls and rainforests and palaces. One afternoon, everyone trekked to a nature reserve to celebrate as Elizabeth the sloth was rechristened a native name meaning "Beloved by Humans." There was a fireworks salute, the clinking of goblets filled with Coca-Cola and Guarana soda, and then the DJ spun "Jungle Boogie.” Meanwhile, a concession stand employee fed stray marmoset monkeys like they were pigeons. And unlike Sundance in Park City, Utah, the film festival isn't even the town's high point of the year: Manaus hosts a big cultural festival every month for rock, opera, folklore, carnival, jazz, theater, dance, pop music, and even Christmas, which this year will be produced by Disney and aired on national TV.

Americans have seen Manaus before, even if they don't realize it. The Ice Cube and Jennifer Lopez masterpiece Anaconda claims to have been shot there, although none of the locals would admit it. (They should.) So few feature films have been shot in the region that when the fest played A Floresta De Jonathas (aka Jonathas' Forest — “Jonathas” is not a typo), a trippy slow burn about a teenager lost in the jungle, it was heralded as the first flick filmed there in 10 years. Film nerds can name a third flick from Manaus: Werner Herzog's Fitzcarraldo, which opens with Klaus Kinksi and Claudia Cardinale leaping from a canoe to dash up the stairs of the grand old Teatro Amazonas, desperate to see Enrico Caruso. But most Brazilians haven't heard of that movie either, though if you believe a word Kinski wrote in his sex-mad autobiography All I Need is Love, he had to have left behind at least a half-dozen half-Brazilian children. 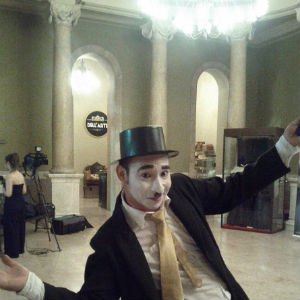 The Teatro Amazonas (pictured at top), where the seven-day film festival was held, looks almost the same as it did when Herzog filmed there in 1982, except for the mime dressed like Charlie Chaplin who stalked the red carpet each night and eagerly leaped in front of every camera. At the opening of the Amazonas Film Festival, the old marble walls — imported from Italy back when the rubber barons of Manaus made it the richest city in the world — buzzed with energy. We American journalists were given headsets that translated the introductory speeches from Portuguese to English, not that they helped us make any sense of the moment when a soap star named Igor, a dead-ringer for Benicio del Toro, stormed the stage uninvited and shouted something loosely paraphrased as, "Thanks for letting me have sex with my girlfriend under a waterfall!" to State Secretary of Culture Robério Braga. Then he pulled a pair of sheer black pantyhose over his head like he was about to rob a convenience store, and fled the stage to massive applause. Lost in translation, I suppose.

The opening night film, Colegas (Buddies) has been sweeping up awards in Brazil. It's comedy version of Natural Born Killers with a twist — the two gun-toting lovebirds on the run with their best friend all have Downs Syndrome. Plus, the trio, headed by de facto leader Stallone (whose parents named him after their favorite actor) were so bored at their institution for the mentally handicapped that they spent their days memorizing old Hollywood movies on VHS. It's a Brazilian movie about American movies — even the credits riff off old posters for Raiders of the Lost Ark and The Godfather. When girlfriend Aniha waves a pistol in a fancy Buenos Aires restaurant, she hollers, “Everybody be cool — this is a robbery!” and when she and Stallone snuggle up, he whispers, “Are you trying to seduce me, Mrs. Robinson?” The inevitable Fox Searchlight remake will rake in millions, especially with the built-in controversy of a cast that's half-disabled. But there was no frisson of exploitation here, though when lead ingenue Rita Pokk literally lowered to her knees onstage to thank the director for allowing her to act, he hastily joined her on the ground.