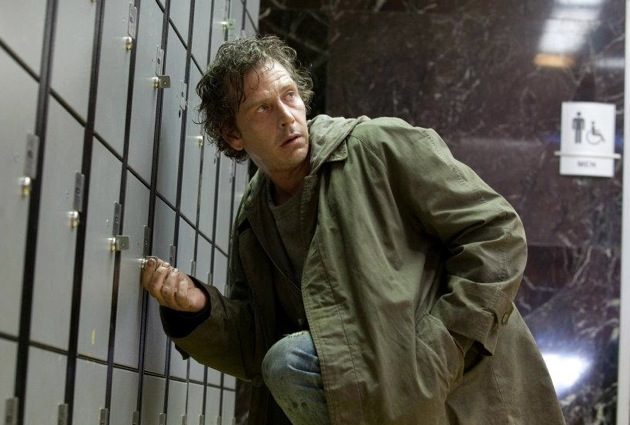 Ben Mendelsohn has played a lot of memorable criminals over the last two years, but it's sign of his chops that the performances have virtually nothing in common. The son of a neuroscientist and a self-described "autodidact," Mendelsohn, 43, began as a TV actor  in his native Australia in 1980s and encountered film stardom there in 1987 as the ill-fated juvenile  delinquent Trevor in The Year My Voice Broke.

In 2010, Mendelsohn gave another breakthrough performance as Andrew "Pope" Cody, the oldest son of a notorious Melbourne crime family, in David Michod's chilling  Animal Kingdom, and in the two years since has given three more riveting performances in key character roles.  He played the oily and corrupt billionaire Daggett in the final chapter of Christopher Nolan's Batman trilogy, The Dark Knight Rises.  Early next year, he'll be seen as Ryan Gosling's cohort in crime in The Place Beyond The Pines, and this week he's in theaters as the small-time heroin-addicted criminal Russell in Andrew Dominik's Killing Them Softly.

Mendelsohn, who probably could have been a neuroscientist himself judging from the clinical, amused way that he looks at his craft,  talked to Movieline about his friendship with Dominik, his work in The Place Beyond The Pines and Gosling's upcoming directorial debut, How to Catch A Monster, and how his performance in Killing Them Softly compares to a classic-but-underrated AC/DC song.

Movieline: I'll get to Killing Them Softly in a minute, but I’ve got to ask you about your character in The Dark Knight Rises. Where did you learn to play a Wall Street scumbag so well?

Mendelsohn: I think there’s a lot of mythos about what’s required in acting. The way that actors talk about acting is generally quite punishing, and I think actors want to put forward the idea that they do all of this work because, you know, it’s a post-De Niro world, when, largely, in fact, it’s almost never true. You know, if you want to encounter these [Wall Street] types, it’s very easy now to get a feel for them. You’ve got the Internet, and if you’ve got a few years on the clock, you will have met a few people like that. But script and context takes care of so much. Unless you're no good at this at all, you should do fine.

You and Andrew Dominik are both Australian. How did you come to work together?

Andrew and I have known each other for an incredibly long time. I'm godfather to Andrew's child. So we’ve been talking about working together, or rather, he has been dangling potential roles in front of my face forever. Let me give you a little Mendelsohn 101: I came up in television in the early- to mid- 1980s in Australia. By the time the late '80s happened, I’m something of a young semi-Tom Cruise — you know, leading man-child around there. Andrew and I knew each other from the mid-'80s but we weren’t friends. We come from Melbourne, but we both ended up shifting to Sydney, and by the mid-'90s, we were thick as thieves. We used to spend like every day together. There was a gang of about five of us guys and we would hang out all the time. You know, I was the big swinging dick on campus and Andrew was this ad guy aspiring filmmaker. At one point, we were even talking about doing Chopper.

And then Andrew suddenly became the dude, and he would talk to me about this role or that role, but he never gave me any of them. He talked about this one, too. I was in Australia and I got a very frantic call, "Can you put down a test?" And I’m like, "Okay, I’ll put down a test." I put down a test, and I didn’t hear anything. Like two months went by, and I was about to take another job, and I got a very frantic emergency call from him pleading and imploring me to take the role. And I’m like, "You fucking idiot. Of course, I want to do it.”

I was impressed by how different your performances are in Killing Them Softly, The Dark Knight Rises and The Place Beyond The Pines. You play a sort of criminal in each one but the characters are totally distinct.

You’ve seen The Place Beyond the Pines?

Yes, I love the ambition of that movie — the way that the story keeps passing the baton to a different set of characters.

Yeah, I’m very proud of it. I haven’t watched the films I’ve been in for 10 years prior to this but I’ve seen Killing Them Softly and The Place Beyond the Pines because both were in festivals where it would have been a big deal to walk out. I’m not a jerk-off about this stuff, but I’ve kept away from watching my stuff. Dark Knight — I haven’t seen.

Why not?
I actually think that it helps me to get better when I keep the mental slate clean of the result. I find that when I do watch the result, the stuff that I end up being concerned about is not stuff that I can actually do much about. And by that, I mean the way your face moves, the way — anyway, real actor bullshit.

In Killing Them Softly, you play Russell, a low-level heroin-addicted criminal who provides some dark comic relief. It's quite an intense, sweaty performance.

Yeah, he feels disgusting. It’s filthy, filthy stuff. Patty Norris — God bless her, who’s on the short list of best production designers out there — put me in this horrendous acrylic sweatshirt and, it was very muggy in New Orleans. So you put it on and off you go. But the most important thing to figure out when you’re playing someone who’s really stoned or out of it is, you basically want to let yourself go. You bend and sway and sort of get to be goofy, and that’s pretty relaxing.

Watching you onscreen, I have to say, I felt like I was watching newsreels of Keith Richards from back in the 70s.
Oh, that's great. That’s highly praise, indeed. Look, there’s some brilliant footage of Sir Keith but he’s got a regalness to him, you know what I mean? Even during his post-Exile on Main Street period, there’s a regal royalty to his stoned-ness, whereas for me, Russell would be more like Lemmy [from Motorhead] if Lemmy was stoned — because Russell’s a bit rough.

I can see that.
Andrew and I plug into music a lot. We both happen to be very big, old AC/DC fans. So we use a lot of those templates too. We’ve got a bunch of good shorthand.

So what AC/DC song best describes your performance in Killing Them Softly?

You and Scoot McNairy, who plays your partner in crime, have quite a realistic chemistry onscreen. Did you have to work at that?

We were there first before anyone else, and we ended up staying the longest. We ended up living together and, I think that was the most important thing. Instead of standing there and pretending to be really angry with each other, we genuinely got to know each other.  Once you find the things about each other that piss you off, that's love. That’s love.

You’re going to be in Ryan Gosling's directorial debut, How to Catch A Monster. Did that happen because of your work together in The Place Beyond the Pines?

I’m pretty sure that The Place Beyond the Pines happened because of Ryan as well. I think Ryan had said to Derek, “What about him?” The [Pines] role, as it was on paper, at the time, was a lot different than what we ended up doing. I was originally going to play a very domineering, down-and-dirty, almost neo-Nazi puppeteer kind of dude who had gotten this guy [Gosling] who was vulnerable and was sending him out to do this stuff. That changed radically. We went a lot deeper in a very different direction, and it lent a very interesting twist to that relationship, which I think is quite beautiful.

Can you tell me anything about your role in How to Catch A Monster?

I think it’s probably too early. I’m not trying to be miserly about it, but you know, the part is still molten. It hasn’t set yet. We are very early in the figuring out phase of Ryan’s piece, but yeah I’m thrilled. I’m really thrilled about that one.