Stephen Colbert is the Lord of the Lord of the Rings. The Colbert Report anchor appeared on Jimmy Kimmel Live with his friend and Comedy Central colleague, Jon Stewart, to talk about how their cultural interests define them and to further fuel speculation that Colbert will be making a cameo in The Hobbit: An Unexpected Journey. 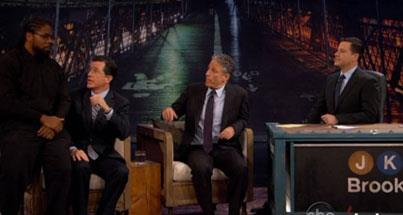 Kimmel, who is broadcasting from Brooklyn this week, had both Colbert and Stewart on the show Thursday night, where he asked the former if he is going to be making an appearance in the first Hobbit film, as media reports have suggested. Colbert said he could 'neither confirm nor deny" such a report — virtually the same thing that Peter Jackson said when EW asked the same question — but he didn't exactly quell speculation when he recounted his experiences on the New Zealand set of  The Hobbit over the summer.

There, during "a party with all of the dwarves," Colbert said he went hairy toe-to-toe with Jackson's resident Tolkien expert Philippa Boyens in a 50-question quiz. "I smoked her," said Colbert. "Peter Jackson officially said I'm the biggest Tolkien geek he has ever met."

Jackson also told EW that Colbert won the geek off, noting that "his encyclopedic knowledge of Tolkien is spectacular, and points to a deprived childhood in some respects.”

Stewart had an even better line. Referring to Colbert's knowledge of all things Tolkien, he told Kimmel: "Bilbo Baggins turned to him on the set and said, "Enough already...And he said it in Elvish."

The Daily Show anchor also pointed out that while Colbert is the only person he knows "fluent in the Bible and Lord of the Rings," he is "more of a pop-culture nerd."

That explains everything!  Watch the boys shtick it up in the clip below.