RZA On The Man With The Iron Fists, Gordon Liu, And His Holy Grail Of Kung Fu Movies 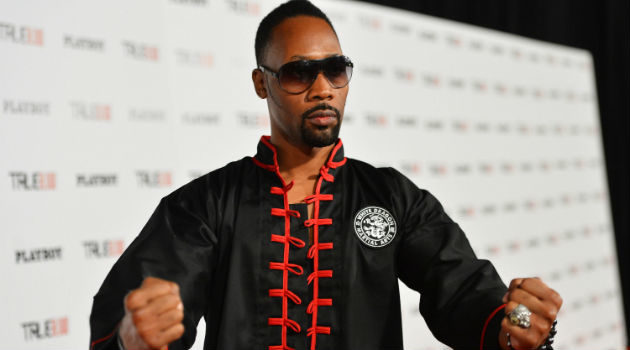 Wu-Tang rapper-turned-actor and composer RZA makes an explosive directorial debut with The Man With The Iron Fists, a vibrantly stylized homage to martial arts cinema that could only have sprung from the mind of the lifelong kung fu fanatic, hip-hop fixture, and Quentin Tarantino protege. Who else would think to set a Shaw Brothers-esque opening fight sequence to the infectious battle anthem "Shame on a Nigga," a Wu-Tang classic that RZA also used to inject a little of his late cousin and bandmate Ol' Dirty Bastard into Russell Crowe's swaggering Jack Knife?

Ahead of his Iron Fists tour, RZA rang Movieline to discuss the many influences that inspired his martial arts homage, what he learned from studying under movie master Quentin Tarantino, how he landed the legendary Gordon Liu for a key role, and the elusive and obscure kung fu movie he's been dying to add to his collection.

[GALLERY: Eye-popping images from RZA's The Man With The Iron Fists]

Your history with kung fu, martial arts, and wuxia movies goes back a long way to your early days, but how did your love of these films synthesize within you into this story you’ve wanted to tell for years now? At what point in your life did you realize you could tell it in this way?
There were many days of imagining, of course, about making my own movie, just day dreaming, but I think it was more like once I worked on Kill Bill with Quentin [Tarantino] watching him work I saw that there was a way to bring some of these ideas into reality. I’ve been watching so many movies and being around it, as far as being an actor or a composer, I just wanted to one day be able to tell my story that I devised. When I talked about it to buddies like Eli [Roth] he found the story entertaining, so I figured I’d study, prepare myself, keep the dream alive and one day bring it to life.

You speak of it in terms of learning, of dedicating yourself to being a student of cinema under the tutelage of these mentors, as you did with Isaac Hayes for music. What do you feel that you learned the most from Quentin?
I basically learned to go from a musician and actor to a director. It was his guidance to lead me to feel I could command a crew, I knew how to work a camera, move cameras, and think in a director’s mind. I knew that I could bring something to the world of cinema that would be cool and even unique. Now, what it was going to be, I wasn’t sure. I wanted it to be Iron Fists; I had another one called A Hard Way To Live, but that one seemed not ready yet. But Iron Fists, I felt like I could really bring this one to life – I see it, I know how to do it. So from him I picked up that complete knowledge of what it takes to be a director. Working on the set with him on Kill Bill and Death Proof – it basically was a college course, yo.

With Quentin Tarantino it's as much about film literacy as it is about on-set, isn't it? What did you learn from watching movies with him?
You know, I missed Fantastic Fest but I came down many times and watched a lot of obscure films there. I also came out to QT Fest and there we watched six movies a day. So all that, every time I watch a movie I watch how Quentin watches it; we watch for education. What he taught me about watching a film was to watch for curves, dives, dips, themes, dialogue, or just even characters. People may ask, ‘Why would RZA watch a movie called Revenge of the Werewolf Woman [Werewolf Woman, 1976]?’ But in that movie, which is a sick movie, it opens with a werewolf dance and a sexy lady looking like a wolf just dances to music. And you watch a lot of Korean movies and you see there’s always a dance scene in every movie. So in my movie, I don’t have a dance scene but I do have the women on stage representing the Asian culture with the long silks that they wear. I love that; you’ve always got to put a piece of culture in a film, regardless.

You’ll notice in my film that, since the Chinese are known for the Chinese Opera – Jackie Chan, Sammo Hung, they started from that – so I put a minute of Chinese Opera in my film to pay homage to the culture. But I learned these things by watching films with Quentin and these are things he points out. That movie Revenge of the Werewolf Woman, there’s a scene where a doctor actually explains the scientific reason why werewolves exist. The way he’s doing it is so convincing but it’s all a total lie. But it’s so convincing that as the audience watches, you believe it. And when you watch Iron Fists you’ll see that there are certain dialogue scenes that try to convince you of the myth of the movie – like how Obi-wan Kenobi taught Luke Skywalker about the Force. These types of things, people leaving the theater believe the Force really exists. And that’s what movies will do.

Can you name some of the films that influenced Iron Fists?
It’s really a collage of film study and watching many movies and trying to create something of my own. When I was making music I would sample different songs and, as they say, mash them all together to make a new beat, right? Then you can’t tell where the original comes from. I think I did the same thing with the film but even in a different way because I was able to just go from total imagination with something that doesn’t even exist at all. There’s never been an idea that you could take chi energy and animate metal, or animate something else – but there’s a martial arts idea that you would take chi energy that transfers through your weapon.

It really does feel like these films and citations and cultural lessons that you’ve accumulated over the years are filtered into this one vision, and it feels so singular from the casting to the music. Russell Crowe’s character, for example, you’ve said was inspired by Ol’ Dirty Bastard.
Yes!

How did that come about?
When we talked about the character one day we had a little problem that we had to figure out on the set. And it seemed like we were going to have a bad day, so I had to go to his trailer and tell him what was going on; to get him to feel comfortable at the time, I told him a story about ODB. The story was, one day ODB walked into the studio late as hell. He was so late, he’s ruined a whole day and wasted all this money. The beat is playing, he walks in, and in one take he performs “Shame On A Nigga Who Try To Run Game On A Nigga.” He does this song in one take and if you notice in the song there’s a part where he goes, “Shame on a nigga who tries to run game on a…” He doesn’t really finish the hook. I was like, ‘Do it over.’ He said, ‘No – that’s it. I’m keeping it. That’s what I like!’ One take.

And this one take idea, I explained to Russell, is sometimes just a moment we capture. It doesn’t have to be done over and over. He’s a guy that would come in and do it in one take. So I know we’re out of time, but for today you might have to go one-take, ODB-style. Now of course Russell’s a master anyway and he’ll do it in one take. But I think telling him that story at that time helped because we were about eight hours late and it helped us capture a lot of things in that one day that it would have taken us two days to do. When you see the film you will see a couple of ODB references and you’ll go, ‘Okay – that’s where he got that from. He does an ODB move exactly like ODB would do!

What was it like to have Gordon Liu on set? Obviously he and his films influenced your entire career, dating back to the very beginnings of Wu Tang. What was your first meeting with him like and how easy was it to get him onboard?
Gordon Liu, first of all, was a blessing for me. To think of when I watched the movie The 36th Chamber of Shaolin, which became the title of our first album, Gordon Liu had played a character called Master Killer, where he had to go to Shaolin to learn how to fight to get revenge for his family. But when he got to Shaolin he started at the 35th chamber but he wanted to go to the top, and when he got to the top the monks weren’t doing kung fu, they were teaching philosophy. And the philosophy that they taught was actually very profound. Now Gordon Liu is known for fighting, in Kill Bill and all of his films, but when I came to him for the role I said, ‘Gordon, I want you to play that monk that you see in 36 Chambers – not the monk who fought but the monk who disseminates all the wisdom.’ He thought about that, and he’s a real Buddhist and everything, so he agreed to do it. It was an honor and a privilege for me. I came to find out he was a musician so I gave him a guitar. [Laughs] And we had a great time. He really helped this film a lot. For me, it was a blessing to have him.

Word has it he’s not been seen much lately because of his health, after filming Iron Fists. Have you been in contact with him since?
After Iron Fists he got sick and everything. I wish him well. I’ve not communicated with him personally.

You’re a known martial arts film scholar - if you had to guess, how many kung fu movies are in your home library?
At least a thousand, yo.

Great, so we're all coming to your house to borrow DVDs.
[Laughs]

Everyone has some holes in the films that they’ve seen. What’s one martial arts film you’ve always wanted to see but never had the chance to?
Well, there are actually a few that I want to collect that I can’t get my hands back on. That’s my problem! I can’t find one movie, and it’s called something like Ghost Killer – it’s the first time you had a character that was called Ghostface, and he’s so terrifying that he’ll walk up to his victim and when they turn around they die just from looking at him. I saw it in a movie theater when I was a kid, it was a triple feature with a movie called Fearless Fighters. I got Fearless Fighters, I’ve got most of these movies, but I could never find that movie. Nobody could find it, so far. I think it’s called Ghostly Face, and it’s a movie that has vampires in it and a guy with this ghost mask. He’s a killer. It’s dope.

The Man With The Iron Fists is out November 2 - stay tuned for more from RZA's martial arts debut.

Tags: gordon liu, RZA, The Man with the Iron Fists