Barnabas Collins Is Dead (Thank You, Tim Burton) − But The Debate Over Who Created Him Is Alive!

Barnabas Collins has risen from the grave once more via the Blu-Ray and DVD release of Tim Burton's film adaptation of  Dark Shadows, and so has spirited argument over who created the tortured vampire back in the 1960s.  Johnny Depp's interpretation of the fanged fan favorite originated by Jonathan Frid may have been D.O.A. at the box office, but, 45 years after Collins debuted on the gothic ABC soap opera and became a cult icon, the squabbling over his invention just won't die. 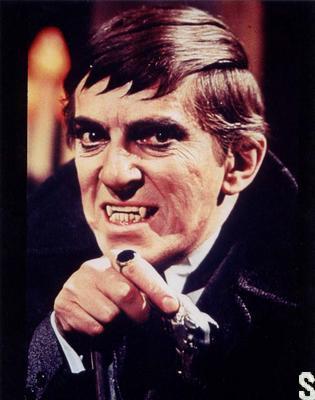 Alas, one of the writers is not around to make his case.  A 2009 Variety obituary for Ron Sproat, who wrote for Dark Shadows from November 1966 to February 1969, credits him with creating Barnabas, and in a 2008 interview with the blog Strange Paradise, another writer for the show, Joe Caldwell, said that the show's executive producer Dan Curtis personally asked him and Sproat to develop the character.

Enter former Dark Shadows writer Malcolm Marmorstein, who insists that Curtis gave him the task of creating Collins. Marmorstein, who is credited with writing the episode in which Barnabas’ arm first shoots out of his coffin, joined the daytime serial in December 1966 after working as head writer of the successful NBC soap, The Doctors. He says Dark Shadows was in danger of cancellation, and he  recommended that adding a supernatural element to the series would boost ratings. Specifically, he suggested to Curtis that the character of Laura Collins be turned into a phoenix, who every 100 years would die by fire and then be reborn.

The phoenix concept debuted on December 21, 1966 and ratings soon improved.  A few months later, Marmorstein says, Curtis asked him to work a vampire into the storyline.

“I told Dan, ‘Absolutely, but we need different ground rules. No one in the town of Collinsport has heard of Dracula. They wouldn’t recognize Bela Lugosi. We have to pretend we’re doing a vampire for the very first time. Let’s get a young, blond guy, because our audiences are very young. They’ll fall in love with him.’”

Instead, the dark-haired, sad-eyed Frid was hired and Marmorstein says the Shakespearean actor's resemblance to Lugosi unnerved him. “I told him, ‘Don’t act. Be a nice man, as you are. This is your family in the house, and you’ve got to be charming for them.” (Frid died in April, a month before Burton’s film was released).

Caldwell tells a different version of events. “Just as we were leaving this story meeting, Dan said, ‘I want a vampire for the kids, for the summer,’” Caldwell remembers. “Ron and I got on the elevator, and by the time we got down to the street, we decided we would make him a reluctant vampire — that he had a conscience and yearned for love.”

“That never happened!”  responds Marmorstein. "That’s what I said to Dan, that Barnabas is reluctant. He doesn’t want to be a vampire.”  Marmorstein also points out that Reluctant Vampire is actually the title of a play he wrote and then directed for the big screen as the 1993 feature Love Bites, starring Adam Ant.

“Joe Caldwell never contributed to the creation of Barnabas,” Marmorstein says. “And Ron wasn’t a creative person. He was a burnt-out Ivy Leaguer who never did more than soap opera.”

Caldwell and another writer on the show remember  Marmorstein as a know-it-all who was more than a little possessive of Barnabas.

“He could certainly be overfond of his ideas," says Caldwell.

Sam Hall, who joined the Dark Shadows writing staff in November 1967 and whose late wife, Grayson Hall, played Dr. Julia Hoffman on the show, says, “Malcolm was interested in vampires and gave the others lectures on how vampires behave. The other writers thought he was a pain in the ass, trying to take over.”

“If the other writers said I was stubborn, maybe I was, because I was clinging to the truth and reality of the character,” Marmorstein replies. “If I built this thing up, and these guys come in and start throwing stupid ideas out, then naturally I’ll say no. Dan wanted more violence and that’s not what the show was about. It wasn’t blood and severed throats and slit guts.”

Not surprisingly, tensions escalated between Curtis and Marmorstein, who was fired in August 1967 while he was vacationing with his family. (Marmorstein went on to work for Peyton Place and write screenplays for S*P*Y*S and Whiffs, which starred Elliott Gould, as well as Pete’s Dragon and Return from Witch Mountain.)

“I don’t think he contributed more than anyone else," Dark Shadows producer Bob Costello says of Marmorstein. "He was part of a team and from that team came Barnabas. If he was as good as he seems to think he was, he wouldn’t have been fired."

While Costello, Caldwell and Hall have been content to consign Dark Shadows to their past, Marmorstein felt compelled to offer his services when Burton decided to adapt the series into a feature.  Marmorstein says he contacted producer David Kennedy via e-mail to no avail. (Kennedy declined to be interviewed, but said he had never met Marmorstein.)

Marmorstein says he also sought to set up a meeting with Depp and his sister and co-producer Christi Dembrowski. Depp, who Marmorstein explains is a good friend of his neighbor, initially seemed interested, but the sitdown never happened. (Dembrowski and Depp did not respond to requests for comment.)

“I thought they might be interested in some of the insights behind Barnabas, which they ignored totally,” Marmorstein says. “I was shocked to see, at the beginning of the movie, Barnabas killing seven or eight innocent people, who weren’t even trying to harm him. Barnabas would never do that. And I saw no reason whatsoever for the movie to be set in 1972. For nothing, I would have told them not to do that. It should have been set today.”

Sam Weisberg has contributed film/entertainment reviews and articles to Spin, The L Magazine, Screen Comment and Tiny Mix Tapes. His blog, Hidden Films , covers hard-to-find and out-of-print films, often featuring interviews with their directors and performers. He is also a daily reporter for the financial online newswire and Financial Times subsidiary Mergermarket.