UPDATE: The attorney for The Central Park Five filmmakers has responded to the city's second subpoena with a letter. I've posted it in its entirety after the jump.

I love the smell of New York politics in the morning. As a longtime resident of Gotham who worked at the New York Post during the Central Park jogger rape case, I'm fascinated — but not surprised — by the city's attempt to subpoena the outtakes and notes from The Central Park Five, Ken and Sarah Burns and David McMahon's documentary that delves into the racially charged incident.

If you've been following the case, then you know that lawyers for the city want to determine if information the filmmakers gathered could help them fight a $250 million federal civil lawsuit filed by the five men who were convicted and then exonerated of the crime.

You probably also know that the Burns pere and fille and McMahon, who's married to Sarah, have vowed to fight the subpoena and have hired an attorney to do so. As Sarah told me, "We're not sure the city can subpoena us because we believe we're protected by the shield laws" that allow journalists to protect their sources and research.  She also noted that the city's original subpoena, which has since been narrowed, "was so incredibly broad that it essentially included everything that we had collected."

"I don't know what they want," Sarah added. "It feels like fishing to me."

More like hunting with an RPG judging from the strongly worded statement that an attorney for the city, Celeste Koeleveld, issued on the matter.

"Mr. Burns and his daughter have publicly sided with the plaintiffs and their families, who are seeking hundreds of millions from New York City.  Sarah Burns worked for years as a paralegal for the plaintiffs' lawyers, and Mr. Burns has stated multiple times, before and since the film's release, that his goal is to 'put pressure on the City to settle' and to influence the jury," reads Koeleveld's statement. "The movie has crossed from documentary to pure advocacy.  Under such circumstances, no reasonable person could have expected us to participate in their project.  The plaintiffs' interviews go to the heart of the case and cannot be obtained elsewhere.  If the plaintiffs truly want an open airing of the facts, they should encourage the filmmakers not to hide anything."

Sarah Burns called these accusations "outrageous," telling me: "As individuals we may have feelings about the case, but we didn't make the film as advocacy. We made the film to tell a true story."  She added: "There’s no such thing as objectivity, but would you say that a columnist for a newspaper is not protected by shield laws because he or she expresses an opinion?"

Speaking of opinions, mine is that Koeleveld's statement reads like it came from the double-talk handbook that New York City officials inevitably consult when ass-covering is required.  On one hand, she's dismissing The Central Park Five as propaganda — and citing its alleged advocacy as the reason that city and law-enforcement officials did not sit before the filmmakers' cameras. On the other, she's claiming that the interviews conducted for the movie are crucial to the understanding of the case.

I invited Koelveld to comment on this story, but her press rep emailed me back to say that due to the pending litigation, she would not be elaborating upon her original statement for the time being. I'll update if anything changes.

UPDATE: The filmmakers attorney John Siegal has responded to the city with the below letter: 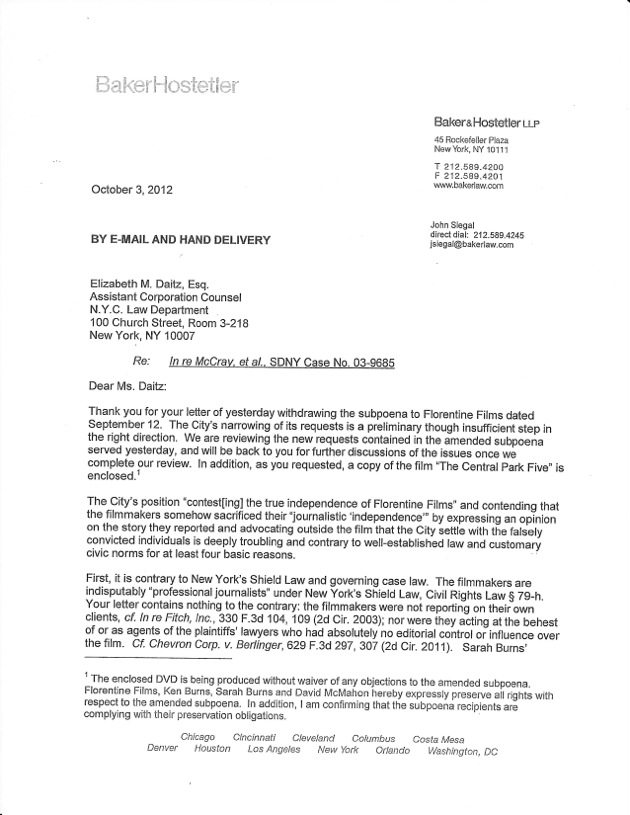 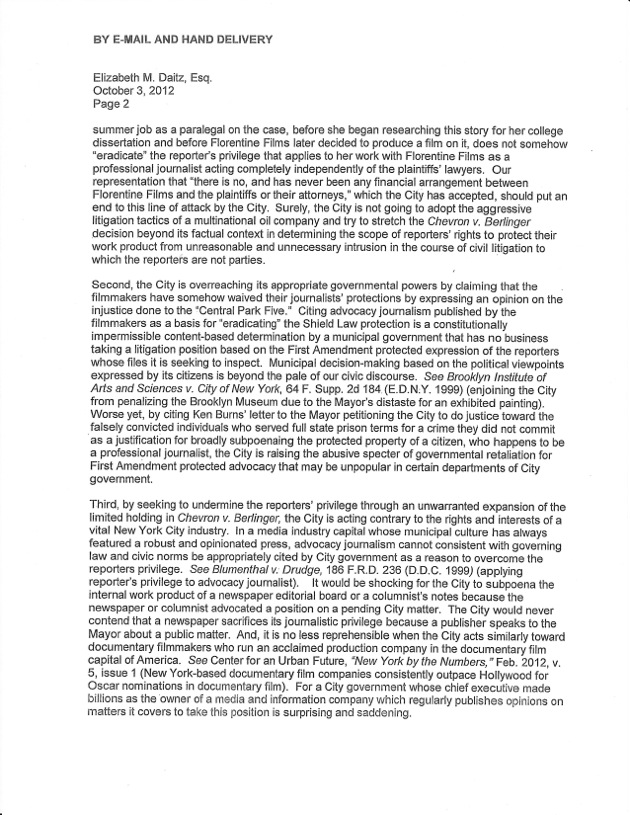 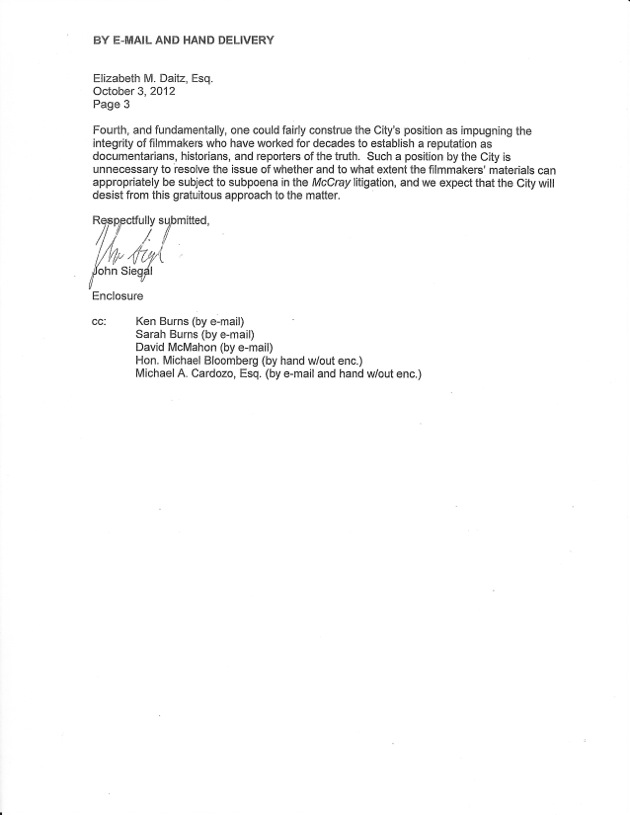