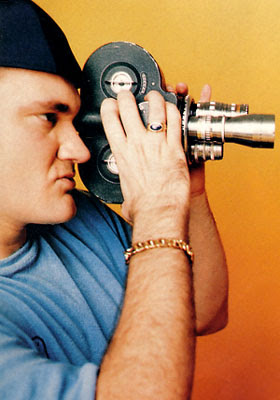 Actor Rex Linn told a crowd in Oklahoma City that he and Tarantino met a number of times before being cast as Tennessee Harry in the feature. He told Linn that the filmmaker wasn't sure exactly how he'd use him, but he would get something. But after he got the Django Unchained script, he discovered some of the most comedic scenes involved him.

"Quentin told me that he liked the scene so much he wanted to be in it too, and that he would also be taking some of my lines," Linn said, according to website Look at OKC. "So, you'll know the scenes when you see them. We'll be on the screen with Don Johnson and Jonah Hill. The scenes may not be long, but you will remember them."

And Linn is not glum about the reduced lines after Tarantino decided to step in front of the camera for what will apparently be a laugh-riot for audiences.

"It's not my movie. I'm just happy to be in the movie," he said. "I mean it's the most anticipated movie of the rest of this year. It's a dream come true.”

This will hardly be Tarantino's first apparition in his own movies. He played the trash-talkin' Mr. Brown in Reservoir Dogs and the babbling Jimmy in Pulp Fiction as well as a bartender in Death Proof. Not quite as certain are suggestions that he appeared as a dead Nazi and an American soldier in Inglorious Basterds and the voice on an answering machine in Jackie Brown.

Set in the South two years before the Civil War, Django Unchained stars Academy Award-winner Jamie Foxx as Django, a slave whose brutal history with his former owners lands him face-to-face with German-born bounty hunter Dr. King Schultz (Academy Award-winner Christoph Waltz). Schultz is on the trail of the murderous Brittle brothers, and only Django can lead him to his bounty. The unorthodox Schultz acquires Django with a promise to free him upon the capture of the Brittles - dead or alive. Success leads Schultz to free Django, though the two men choose not to go their separate ways. Instead, Schultz seeks out the South's most wanted criminals with Django by his side. Honing vital hunting skills, Django remains focused on one goal: finding and rescuing Broomhilda (Kerry Washington), the wife he lost to the slave trade long ago.

[Sources: Look at OKC, The Guardian]