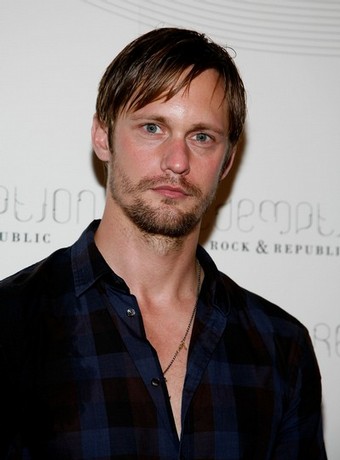 It is certainly one of the most anticipated questions in recent casting memory. Who is going to play the role of Christian Grey in the film version of Fifty Shades of Grey. Two of the rumored top contenders for the scintillating part, Ryan Gosling and Alexander Skarsgård seemed a bit blindsided by the question at the recent Toronto International Film Festival, with Gosling giving a mostly noncommittal response, while Skarsgård gave a more thoughtful exchange on the red carpet of the TIFF premiere of What Maisie Knew. Fans can even be heard screaming out, "You have to play him!"

Hitting a red carpet event, Ryan Gosling looked a bit shell-shocked with the question that has lingered in the press throughout the summer. Will he take on Christian Grey, the young business magnate who forms a powerfully sexual relationship with Anastasia Steele in the 2011 erotic novel by British author E.L. James. Whoever the actor that ultimately gets/takes the part will likely see a huge onslaught of attention from fans of the hugely popular novel and likely follow-ups as the story, mostly set in Seattle, is the first of a trilogy (and as evident in Hollywood cash cows, trilogies can often morph into four parts).

"I have yet to read the book, so I'm not sure that I can comment on it," said Gosling as he politely but decidedly stepped away. "I'm not saying no or yes." Still, not saying "no" titillated the E.T. host in the video and so the Will he or won't he question will linger on.

Alexander Skarsgård, meanwhile, had a bit more to say over speculation he'll play the hot rich thing in the film version. He has yet to read the book as well and also did not give a definitive yes or no but added a few stipulations on any possible go-ahead.

"No I have not read the book, so it's difficult to answer that," he said to E.T. Canada, adding that if certain factors fall into place it could work for him. "Of course if it's a great script… there are so many variables. It depends on who's directing it and who's in it."

Asked to give her two cents, Skarsgård's What Maisie Knew co-star Julianne Moore is clearly not one of the legions of fans just itching to see the blockbuster novel hit the screen. The ever-stylish four-time Oscar nominee stuck out her tongue when asked about the looming project and scurried away, saying simply, "It's awful."